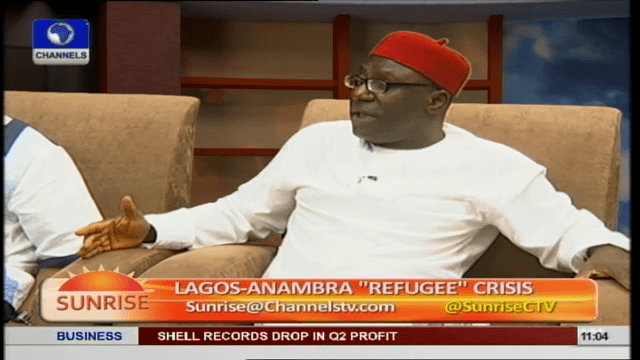 In light of the accusations made against the Fashola led Lagos government, of encouraging tribalism, a Public Affairs analyst, Cdon Adinuba, has said that Governor Babtunde Fashola is not ‘anti-Igbo’.

While discussing the controversial deportation of certain individuals to Anambra state on Channels Television’s Sunrise, Mr Adinuba said that the Fashola’s administration’s aim to turn Lagos into a mega city is paving way for “a new social order” which means taking a lot of people away from the streets. “This initiative has been on for 6 years,” he said.

Following the many criticisms against the Lagos government for ‘deporting’ some citizens of the country to Anambra state, Mr Adinuba said it is untrue that Governor Fashola is unfriendly to Igbos in the metropolis.

Citing cases such as the state assistance of N4.5million given to actress, Ngozi Nwosu, who needed financial assistance for her failing health, Mr Adinuba added that the Lagos governor cares about the Igbo tribe.

He discarded rumours of bad blood between the two state governors. “He’s a personal friend and we are very proud of him”. He added that he had in his possession, 5 letters of correspondence, between the Lagos and Anambra governments.

He blamed subordinates who may not have carried out their assignments appropriately.

A legal practitioner, Emeka Okpoko confirmed that the Anambra governor is not attacking Governor Fashola, but also respects him.

However, he said Governor Obi was not speaking solely for Anambra indigenes, but for every citizen.

We confirmed that there were indeed correspondences between the two governments but insisted that Lagos state did not conduct the proceedings properly.

“Government business is not done by 3am,” he said.

He also described the act as unconstitutional and illegal.

Also speaking during the breakfast programme, the National Coordinator, Alliance for Positive Reform, Oscar Onwundiwe, said that the Lagos government has done something wrong but Governor Fashola is not happy about the bad publicity.