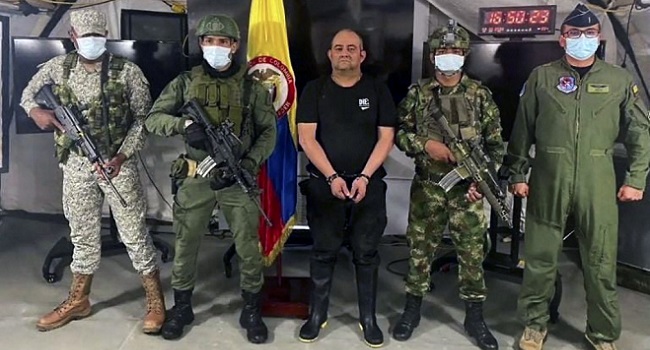 Colombia’s government announced Sunday it is working towards extraditing the country’s most-wanted drug trafficker “Otoniel” to the United States, a day after he was captured in a major operation in the jungle.

“This is the path for all those who commit transnational crimes,” Molano told reporters later, adding that nearly 30 percent of the many tons of cocaine exported from Colombia went through the so-called Gulf Clan, the country’s largest drug trafficking gang, led by Otoniel.

The 50-year-old drug lord, whose real name is Dairo Antonio Usuga, was arrested Saturday in northwest Colombia’s dense jungle in an operation involving some 700 uniformed agents backed by 18 helicopters, according to the army.

The United States had offered a $5 million bounty for information leading to the arrest of Otoniel, one of the most feared men in Colombia.

“This is the hardest strike to drug trafficking in our country this century,” President Ivan Duque said Saturday, adding that the arrest was “only comparable to the fall of Pablo Escobar,” the notorious Colombian narco-trafficking kingpin.

The government accuses other armed groups such as the Popular Liberation Army (EPL), and rebels who walked away from the peace pact signed with the FARC guerillas in 2016, of financing themselves with drug trafficking revenue.

Born to a poor family, Otoniel joined the EPL, a Marxist guerrilla group that demobilized in 1991. A paramilitary fighter, he ultimately headed the Gulf Clan, with a force of some 1,600 men and a presence in almost 300 municipalities nationwide, according to the independent think tank Indepaz.

In Colombia Otoniel had 128 outstanding arrest warrants for drug trafficking and recruitment of minors, among other crimes.

“He murdered more than 200 members of the security forces… Many soldiers have suffered because of this murderer and his friends,” Duque said.

Otoniel also preyed on minors, “intimidating families and extorting them in order to take their daughters’ virginity,” the president added.

In five decades of a US-backed drug war, Colombia has killed or captured several drug lords, including kingpin Escobar, who was shot by security forces in 1993.

But the country remains the world’s leading cocaine producer, with the United States its biggest buyer. 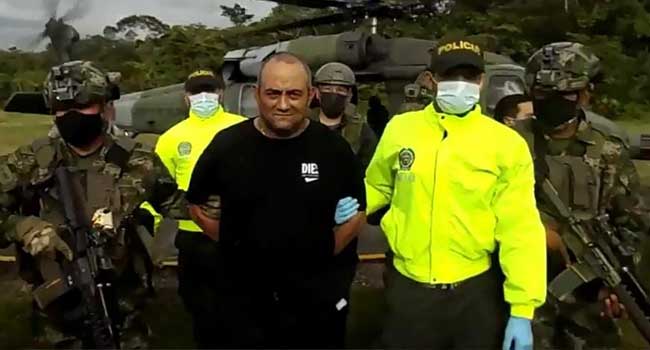 Colombia’s most-wanted drug trafficker “Otoniel” has been captured, officials said Saturday, a major victory for the government of the world’s top cocaine exporter.

Dairo Antonio Usuga, who headed the country’s largest narco-trafficking gang known as the Gulf Clan, was captured near one of his main outposts in Necocli, near the border with Panama.

Images released by the government showed the 50-year-old Otoniel in handcuffs and surrounded by soldiers.

“This is the hardest strike to drug trafficking in our country this century,” President Ivan Duque said in a message, adding that the arrest was “only comparable to the fall of Pablo Escobar,” the notorious Colombian narco-trafficking kingpin.

Some 500 soldiers backed by 22 helicopters were deployed in the Necocli municipality to carry out the operation, which left one police officer dead.

It was “the biggest penetration of the jungle ever seen in the military history of our country”, Duque said.

A live broadcast by the police later showed a handcuffed Otoniel landing in Bogota before being taken into custody under heavy security.

Colombia’s police chief Jorge Vargas said during a press conference that authorities carried out “an important satellite operation with agencies of the United States and the United Kingdom.”

According to police, Otoniel was hiding in the jungle in the Uraba region, where he is from, and did not use a telephone, relying on couriers to communicate.

Fearful of authorities, he “slept there in the rain, never approaching inhabited areas,” Vargas said.

The United States had offered a $5 million bounty for information leading to the arrest of Otoniel, one of the most feared men in Colombia.

He was indicted in the United States in 2009, and faces extradition proceedings to the country, where he would appear in the Southern District of New York federal court.

The Colombian government blames the group — financed mainly through drug trafficking, illegal mining and extortion — for being one of the main drivers of the worst bout of nationwide violence since the signing of a peace pact with FARC guerillas in 2016.

The Gulf Clan is present in almost 300 municipalities in the country, according to the independent think tank Indepaz. However, recent government efforts have seen the organization decimated.

Although Otoniel announced in 2017 he intended to reach an agreement to participate with the Colombian justice system, the government responded by deploying at least 1,000 soldiers to hunt him down.

He took over the leadership of the Gulf Clan — previously known as the Usuga Clan — from his brother Juan de Dios, who was killed by police in 2012.

Born to a poor family, Otoniel joined the Popular Liberation Army (EPL), a Marxist guerrilla group that demobilized in 1991.

After laying down his arms, he later returned to fighting, joining far-right paramilitary groups.

Many of these were demobilized in 2006 at the initiative of former right-wing president Alvaro Uribe’s administration, but Otoniel decided to remain in the fight.

Colombia is the world’s top producer of cocaine, with the United States as its principal market, despite half a century of efforts to clamp down on the drug trade.