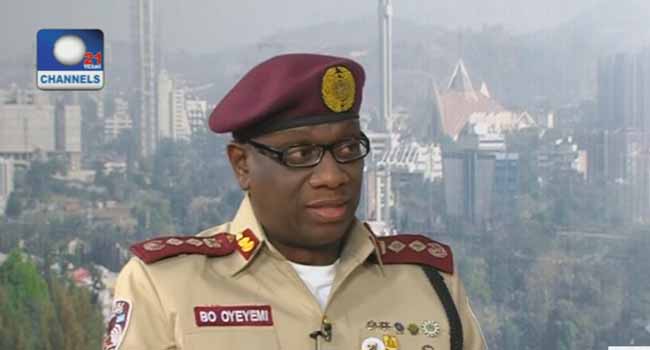 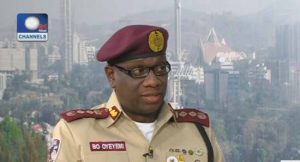 One more person has been confirmed dead, by the Federal Road Safety Corps (FRSC) Marshall, Boboye Oyeyemi, bringing the death toll of the Lagos-Ibadan express way accident, to Four.

He also made the confirmation that five, not four vehicles as against Wednesday’s report, were involved, while speaking on Channels Television’s breakfast show, Sunrise Daily.

Mr Oyeyemi, explaining the situation that led up to the recent road congestion, said:

“The Lagos Ibadan expressway has the highest traffic density in the country, of about 25,000 vehicles per hour.”

Hence, the need for the ongoing road construction, aimed at expanding the roads from two-way lanes to three.

After rescue efforts were completed, on Wednesday, the aftermath of the accident was the gridlock which commuters still have to suffer a day or more after.

“All those tankers, trailers that were packed because of the gridlock yesterday, started moving, and because the inbound lane had been shut down for repairs, leaving only one lane, there is bound to be a band-wagon effect.

“When those tankers are moving, there’s no way for any other vehicle to attempt to over-take,” he said.

He however stated that his men had worked over-night and were still on ground, while suggesting that “what we require now, is traffic redistribution.

“All those trailers should be re-routed so that there can be flow of traffic for smaller vehicles and buses,” he stated.

Mr Oyeyemi, then suggested three ways by which the situation could be abated.

He said, vehicles could re-route through Lekki-epe, Ikorodu or Sango-ota, Abeokuta routes.

However to make that move possible, he hinted that he would be relocating from Abuja to Lagos on Thursday, so that proper discussion could be held on how to further ease the situation.

The ghastly accident occurred when a tanker collided with another truck, causing a fire explosion, on a major bridge along Lagos-Ibadan expressway, in the early hours of Wednesday. 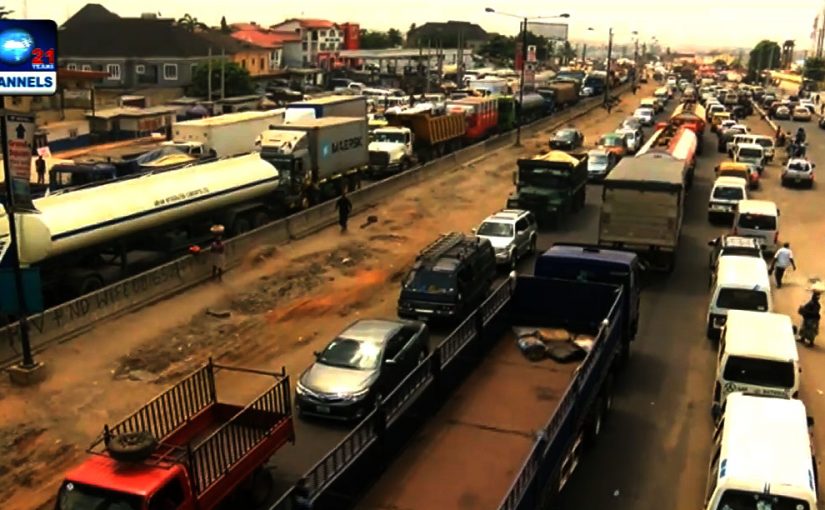 Commuters have woken up to yet another ugly traffic situation on Thursday, a second day of  the gridlock experienced on the Lagos-Ibadan expressway.

This follows the accident that occurred at about 3:30 am on Wednesday, in which a diesel tanker and a truck collided, leading to an explosion involving two other vehicles.

With the relentless effort of the emergency agencies, comprising the FRSC, NSCDC, LASEMA and the police, in putting out the fire outbreak and clearing the debris from the expressway, it seemed like the problem would have been abated before night fall but unfortunately that was not the case.

The incident necessitated the condoning-off of the outbound Lagos-lane which led to the undue congestion on the opposite lane where people struggled to move against the traffic.

As at 04:45 am on Thursday morning, lengthy back lights from cars, buses, trailers to trucks could be sighted far beyond one’s reach, stretching the lengthy expressway, with a stop point for adjoining vehicles heading towards Mowe-Ibafo/Lagos-outbound lane.

Motorists picked on the modus-operandi applied on Wednesday during the gridlock, this time without the presence or directives of the agencies, as Lagos in-bound lanes transformed into a two-way lane.

As at 07:45 am, on our breakfast show, Sunrise Daily a Channels Television Correspondent, Sulaiman Aledeh, who was held up in the gridlock, hinted about the situation on ground.

Speaking to Federal Road Safety Corps Marshall, Boboye Oyeyemi also on the breakfast show, he explained what has led up to the situation on the road so far.

“The Lagos Ibadan expressway has the highest traffic density in the country, of about 25,000 vehicles per hour,” he said.

This data according to him, is what led to the on-going construction aimed at expanding the roads from the two-way lane to three.

While commending efforts of the Lagos State Emergency Management Agency, and other agencies who helped to ease off the traffic on Wednesday, he said men have currently been deployed to make the situation better.