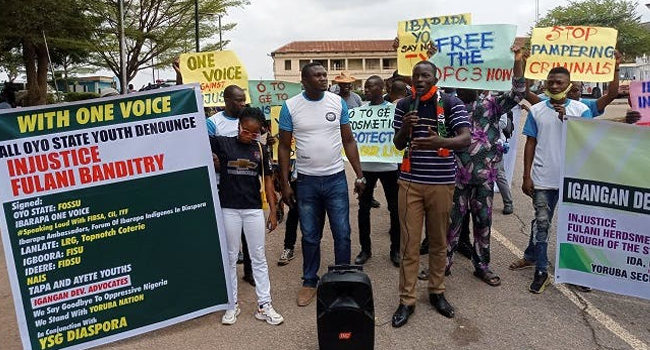 Some youths from Ibarapa in Oyo State have protested the prolonged detention of some Odua Peoples Congress (OPC) members for their role in the arrest of Iskilu Wakili accused of violence against farmers and residents of Ibarapa.

The youths staged the protest at the Oyo State Government Secretariat in Ibadan, the state capital, on Monday.

They claimed that there were signals pointing to government authorities being keen on pampering criminals and jailing the three OPC members whom they described as heroes.

READ ALSO: Insecurity: We Are In A Critical Situation – Defence Minister

A spokesperson for the youths, Oladiran Oladokun told Channels Television that, “since government and security operatives disappointed in the arrest of the alleged kidnap kingpin (Iskilu Wakili), it was the OPC that came to their rescue hence we demand the release of the three OPC members as we do not trust the judicial system for fair prosecution.”

Oladokun lamented that rather than for the three OPC members to be commended for daring the odds to help security agencies affect the arrest of the notorious Iskilu Wakili, they were being remanded in custody.

The Chief of Staff to the Governor, Bisi Ilaka, who addressed the protesters on behalf of the Oyo State government, assured that the government was on top of the situation and will ensure that justice would not be compromised

Following the arrest of the suspected notorious kidnapper in Ibarapa, over allegations of kidnapping, land grabbing, terror, murder amongst other offences, by members of OPC, three members of the OPC have been in police custody for their roles in the matter.