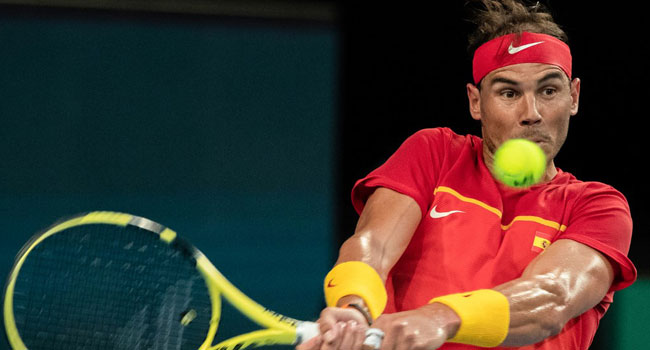 World number one Rafael Nadal sharpened his serve and cruised to a 6-2, 6-1 victory over Pablo Cuevas at the ATP Cup on Monday in a flawless display as he fine-tunes for the Australian Open.

Spain plays Japan on Wednesday with the winner qualifying for the knockout phase in Sydney, while the loser will have to rely on other results.

Underdog Cuevas had beaten Nadal in Rio four years ago, a feat particularly impressive for having been played on the Spaniard’s preferred clay surface.

But he was never in the contest Monday.

“I played better than the other day and it’s a very positive victory against an opponent I have a lot of respect for,” said Nadal, while praising the packed stadium as the reason why he keeps going.

“Because of these very special feelings when you are on court in front of a great crowd supporting, that’s one of the reasons why you wake up every morning and go on the practice court with the right passion and the clear goal to improve something.”

Nadal started with an ace and looked sharp but Cuevas, who suffered a tame defeat against Yoshihito Nishioka in his opener, matched with clean striking from the baseline.

The 33-year-old notably served strongly and faced just one breakpoint for the match after struggling in his season opener against Nikoloz Basilashvili.

World number 10 Bautista Agut has had a soft draw to start the season against ATP tour debutants Roncadelli and Aleksandre Metreveli, who he crushed 6-0, 6-0 on Saturday.

The left-hander unleashed several menacing slices and hit the scoreboard in the third game to energise the near-capacity crowd, before Bautista Agut put the foot down and he finished with 17 winners in the 57-minute match.

“It isn’t easy playing a match like this, but I’m happy for him to have this experience,” Bautista Agut said.

In the earlier Group B tie, Nishioka notched his second upset to start the season after downing world number 26 Basilashvili in straight sets, as injury-hit Japan continued to surprise.

The world number 72 won 6-2, 6-3 to clinch the tie for unbeaten Japan after Go Soeda prevailed over Georgia’s Aleksandre Metreveli in three sets.

Japan, who whitewashed Uruguay on Saturday, are unbeaten despite the withdrawal of injured star Kei Nishikori and Yasutaka Uchiyama, their third best player, before the tournament.

They will attempt to continue their gutsy run against Spain, where Nishioka faces the daunting task of playing Nadal.

“I believe I can beat him,” Nishioka said. “I change my game plan against each opponent and I have a plan (against Nadal). If it works, maybe I have a chance.”

Winless teams Uruguay and Georgia are out of contention. 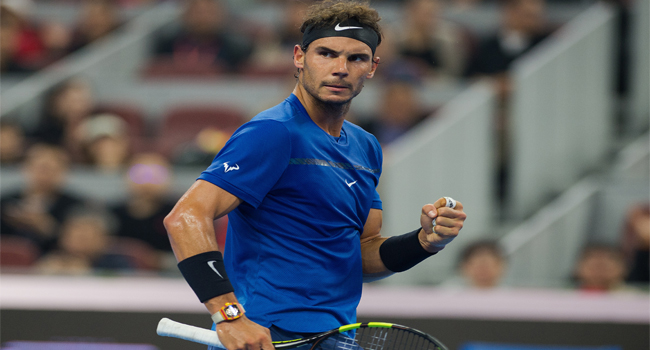 World number one Rafael Nadal overcame a second-set blip to reach the Paris Masters quarter-finals on Thursday with a 6-3, 6-7 (5/7), 6-3 victory over Uruguayan Pablo Cuevas.

The Spaniard, 31, had sealed the year-end number one spot for a fourth time on Wednesday, but he was made to work hard by an enterprising Cuevas.

Nadal is looking for his maiden title on the Bercy hard courts, which would take him clear of Novak Djokovic with a record 31st Masters triumph.

The 16-time Grand Slam champion will take on world number 77 Filip Krajinovic in the quarters, after the Serb beat Nicolas Mahut 6-2, 3-6, 6-1.

“It was a very difficult match, Pablo is a very good player,” Nadal said in his on-court interview.

“It’s always hard playing someone for the first time, but I will do my best (against Krajinovic).”

Nadal started far stronger than he did in Wednesday’s win over Hyeon Chung, breaking early on thanks to a couple of trademark forehands.

Cuevas played his part during the first set in front of a near-capacity crowd, hitting an outrageous ‘hot-dog’ shot between his legs for an outright winner.

But Nadal held after a tough service game for a 4-1 lead before closing out the opener on his fourth set point.

The reigning French and US Open champion has only won two of his 75 ATP titles indoors, with just one at this level coming at the 2005 Madrid Masters.

He broke in the third game of the second set, only to hand Cuevas a lifeline with a string of uncharacteristic unforced errors as the world number 36 hit straight back.

The South American forced a tie-break, but after Nadal had moved 4-2 in front, the top seed dumped two volleys into the net and Cuevas levelled the match at the first opportunity.

Nadal called the trainer to have his knee taped before the third set and returned to the court reinvigorated, breaking serve in the second game with a fierce backhand down the line.

Cuevas also had to call the trainer after appearing to dislocate his thumb when sliding for the ball, but he grabbed the break back as Nadal struggled to put the match to bed.

That proved to be the unseeded player’s final show of resistance, though, as his illustrious opponent reeled off three successive games before wrapping up the match with a big serve out wide.

– Del Potro one win from London –

Earlier on Thursday, Argentina’s Juan Martin del Potro closed in on a place for the World Tour Finals after beating Robin Haase 7-5, 6-4.

The former US Open champion will take the eighth and final qualification spot for London from Pablo Carreno Busta if he reaches the semi-finals at Bercy.

Last year’s runner-up Isner will qualify for the Tour Finals if he wins the tournament in Paris.

“It’s going to be a good battle next round trying to qualify for London,” said Del Potro.

“But anyways, I think I have two ways to take, one is London, one is my home and vacation.

“Both ways are great to me, but of course, I would love to reach London once again.”

The South American’s victory means that 12-time Grand Slam winner Djokovic will drop out of the world’s top 10 next week for the first time since March 2007.

Lucas Pouille’s slim chances of reaching London ended, though, as the home player lost 7-6 (8/6), 6-3 to the big-serving Jack Sock.

The American will next face veteran Spaniard Fernando Verdasco, who knocked out Austrian fifth seed Dominic Thiem with a 6-4, 6-4 victory to reach his first Masters quarter-final since 2012.