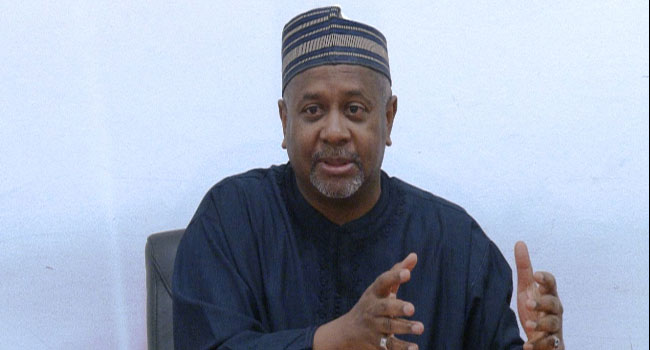 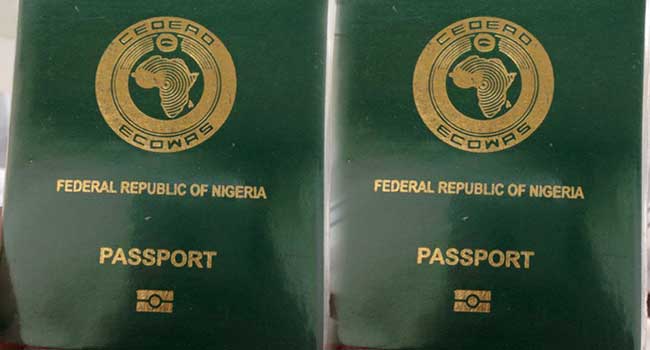 The latest report regarding the world’s most powerful International Passport places the Nigerian passport at 95.

According to the list put together by Henley Passport Index which occasionally curates a list of the world’s most travel-friendly passports, Nigeria is just above countries like Djibouti, South Sudan, and other war-torn countries in the middle-east.

In the recently published report, the Japanese passport is the most powerful in the world, as it avails those who possess it visa-free or visa-on-arrival access to about 191 destinations around the world.

The list also shows another Asian country – Singapore sitting in second place, with other European countries trailing right behind.

Though the largest nation in Africa and often called the giant of the continent, Nigerians still do not have it easy while travelling internationally.

Those who possess a Nigerian passport often experience difficulties going through a plethora of checks, many have often described as dehumanizing the way they were treated at the airports of other nations.

READ ALSO: Top Ten Most Powerful Passports To Hold In 2020

Every year millions of Nigerians leave the country’s shores some for pleasure visits, others for medical tourism and a lot more in search of greener pastures.

However, these trips are not all palatable as the Nigerian passport only avails visa-free or visa-on-arrival access to only 41 countries, with many having to struggle and pay through their noses to visit the highly developed nation.

The weakness of the Nigerian passport and the way Nigerians are treated when they travel is not unconnected with the nation’s battle with terrorism, fraud and other crimes.

In December 2019, Nigeria was added to a United States ‘special watch list’ of countries that had engaged in or tolerated the severe violation of religious freedom.

Boko Haram and eight other terrorist groups were also described as ‘Entities of Particular Concern’.

This in no way puts the nation and those who bear its passport in a good light, hence, one can tell where the unpalatable treatment meted out to Nigerians when they travel, stems from.

In recent times, the name ‘Nigeria’ had become very synonymous with fraud.

US authorities in August 2019, announced charges against 80 people, most of them Nigerians, in a wide-ranging fraud and money laundering operation that netted millions of dollars from victims of internet con jobs.

Federal prosecutors unsealed the dozens of indictments after 17 people were arrested and taken into custody in Los Angeles and elsewhere in the United States.

Most of the remainder of those indicted were believed to be in Nigeria.

With such a reputation, one cannot expect that many nations will be more skeptical about their interactions with Nigerians and those with Nigerian passports.

In an interview granted to the New Telegraph, President Buhari warned his fellow citizens to stop trying to make asylum claims in Britain, saying that their reputation for criminality has made it hard for them to be “accepted” abroad.

President Buhari said the number of Nigerians imprisoned for law-breaking in Britain and elsewhere, is the reason many are unlikely to get much sympathy.

Similarly, while addressing Nigerians in the Diaspora in Yokohama, Japan, Buhari said their actions should not reflect on the majority of Nigerians who are law-abiding.

He said there are few Nigerians in the Diaspora that are giving the country a bad name by engaging in criminal activities.

According to him, those Nigerians are a minority and do not represent the values of the country.

The President pleaded for those tarnishing the country’s name to change their ways, adding that his government will not condone any crime whether at home or abroad, and we will also not allow fraudulent Nigerians to define the nation as a people with reputation for criminality.

It is hoped that the fight against crime which is about the most important focus of the Buhari-led administration, will yield results which would see a turn in the value of the nation’s passport as well as a change in the way the world sees Nigerians. 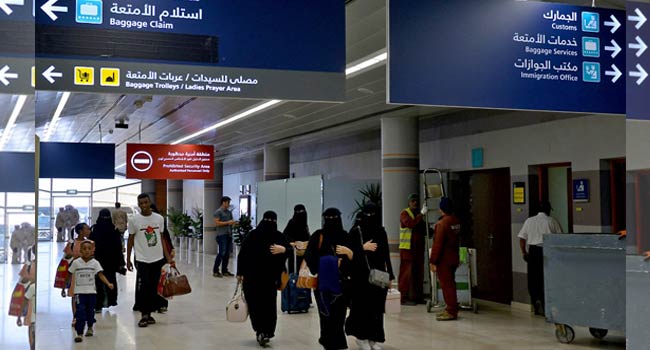 Saudi Arabia will allow women to travel abroad without approval from a male “guardian”, the government said on Thursday, ending a restriction that drew international censure and prompted extreme attempts to flee the kingdom.

The landmark reform erodes the longstanding guardianship system that renders adult women as legal minors and allows their “guardians” — husband, father and other male relatives — to exercise arbitrary authority over them.

The decision, following years of campaigning by activists, comes after high-profile attempts by women to escape their guardians despite a string of reforms including a historic decree last year that overturned the world’s only ban on female motorists.

“A passport will be granted to any Saudi national who submits an application,” said a government ruling published in the official gazette Umm al-Qura.

The regulation effectively allows women over the age of 21 to obtain passports and leave the country without their guardian’s permission, the pro-government Okaz newspaper and other local media reported, citing senior authorities.

Women in the kingdom have long required permission from their male “guardians” to marry, renew their passports or exit the country.

The decision was met with jubilation on social media, with the hashtag “No guardianship over women travel” gaining traction and many posting humorous memes of women fleeing with suitcases and being chased by men.

“Some women’s dreams were aborted due to inability to leave the country for whatever reason… to study abroad, a work opportunity, or even flee if so desired,” Saudi businesswoman Muna Abu Sulayman said on Twitter.

“This change means women are in a way in full control of their legal destiny.”

The changes announced Thursday also grant Saudi women what has long been a male entitlement — the right to officially register childbirth, marriage or divorce and to be recognised as a guardian to children who are minors.

The reform comes as Saudi Arabia faces heightened international scrutiny over its human rights record, including an ongoing trial of women activists who have long demanded that the guardianship system be dismantled.

That includes Loujain al-Hathloul, a prominent rights activist who marked her 30th birthday this week in a Saudi prison, campaigners said.

Alongside a sweeping crackdown on dissent, Crown Prince Mohammed bin Salman — the kingdom’s de facto ruler — spearheads a wide-ranging liberalisation drive that is aimed at transforming the conservative petrostate, long criticised for its treatment of women.

His reforms include the much-celebrated decision allowing women to drive in June last year, allowing women to attend soccer games alongside men and take on jobs that once fell outside the narrow confines of traditional gender roles.

But while transforming the lives of many women, critics said the reforms will be cosmetic for many others until the kingdom abolishes the “guardianship” system.

Some have undertaken perilous attempts to escape overseas despite the reforms.

They include 18-year-old Rahaf al-Qunun, whose live-tweeted asylum plea from a Bangkok hotel in January after she fled her Saudi family drew global attention.

Later, two Saudi sisters who sought sanctuary in Hong Kong from what they called family abuse were allowed passage to a third country that was not named for their safety.

And subsequently, two other Saudi sisters fled to Georgia.

The latest reform, which weakens but does not completely dismantle the guardianship system, could lead to family clashes in the deeply patriarchal society, observers warn.

Saudi officials have expressed commitment to fighting guardianship abuse, but have warned the system can only be dismantled piecemeal to prevent a backlash from arch-conservatives.

In a one-off case last year, a Saudi court ruled in favour of a 24-year-old woman who challenged her father’s decision to not let her have a passport. But until Thursday’s ruling, she would have still required his permission to travel. 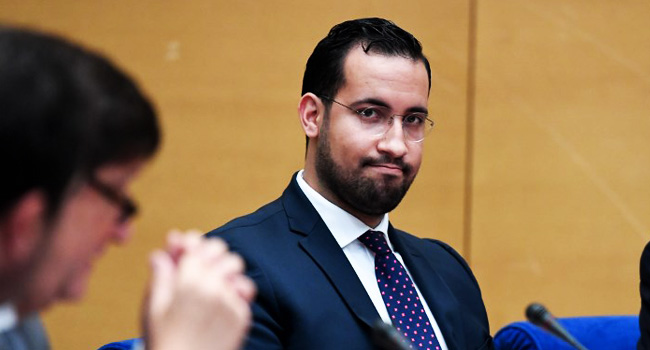 A former bodyguard for French President Emmanuel Macron was taken into police custody Thursday over his continued use of diplomatic passports after he was fired for roughing up protesters, prosecutors said.

Alexandre Benalla was a security official and a member of Macron’s inner circle before his dismissal last summer after a video emerged of him assaulting protesters at a May Day demonstration while wearing a police helmet.

The video, and claims that Macron’s office tried to cover up the affair, caused a political storm that severely dented the president’s popularity.

Benalla was eventually sacked on August 1, and he has since been charged with assault and impersonating a police officer.

But the 27-year-old returned to the headlines recently after it emerged he had retained several diplomatic passports even after losing his job.

In particular, he used them to travel to Africa to meet with top officials in what some officials fear was an attempt to profit from his former insider status.

Police opened an investigation into suspected abuse of trust and illegal use of professional documents, and a Senate hearing renewed its hearings this week of government officials, including Macron’s office director Patrick Strzoda.

Benalla has claimed that he returned the passports shortly after being fired, but that they were handed back to him by a “presidential aide” in October.

He is also suspected of having kept a government-issued cellphone with special encryption capabilities.

The former bouncer began working as a bodyguard for Macron during his election campaign in 2016 before being promoted to a senior security role in the presidential palace in May 2017.