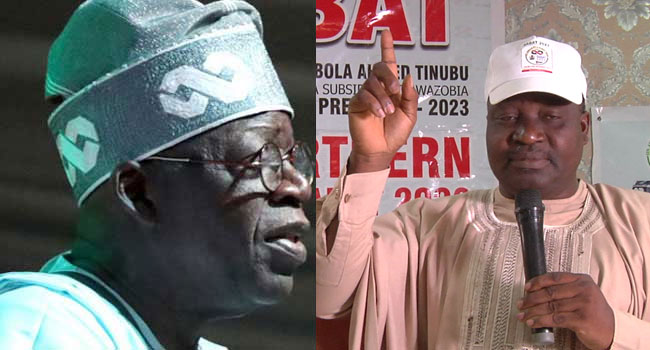 A group in the 19 northern states and the Federal Capital Territory, has endorsed former Governor of Lagos State, Bola Tinubu, for the presidency in 2023, saying he is the most qualified for the nation’s number one office.

The group, known as Senator Bola Ahmed Tinubu Support group, at its meeting in Kaduna State, said the former governor has all the qualities to tackle the myriads of socio-economic challenges confronting the nation including insecurity and an ailing economy.

Speaking during the meeting on Sunday, the Director-General of Senator Ahmed Tinubu Support group, Patrick Olatunji, described Tinubu as a detribalized person who has mentored and made thousands of people in politics and business, noting that the All Progressive Congress (APC) chieftain will replicate the same when he becomes the president in 2023.

READ ALSO: Medical Trip: Buhari Hands Over To Osinbajo, Flies Out To London

“He has demonstrated it in Lagos State, he is prepared for the job. He is ambitious to be President, but he is prepared. He has trained many people, he has foot soldiers in all nooks and crannies in this country,” he said.

“They work for him and that is why all of us are here. By the grace of God, when he gets there, I know our problem in this country will be solved 100 per cent.

“This man has connections all over the world. When there was [an] election crisis in Osun that PDP said they won the election, he traveled abroad to get these forensic people, the first in the whole world. He used that forensic tactic to win back Osun State.”

Olatunji also said that Tinubu will revamp the nation’s power sector as well as make industries strive should be emerge as Nigeria’s president next year.

Other members of the group also said that majority of northern residents have already bought into the Tinubu 2023 presidential project on the grounds that he has the capacity to reunite and champion the country on the part of progress and also tackle insecurity.

According to them, the country still needs mature people with vast knowledge and experience like Tinubu to take it to the level of greater development and progress.