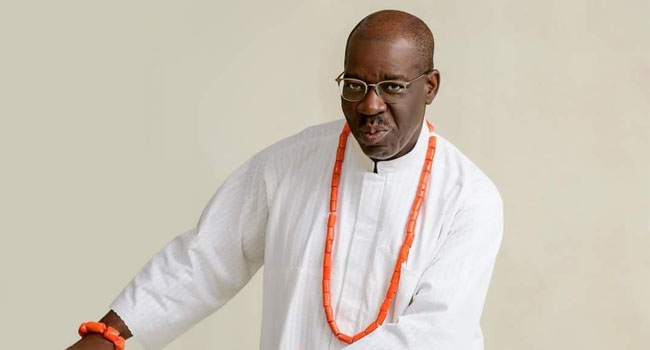 Congratulatory messages have been pouring from chieftains of the Peoples Democratic Party (PDP) after Godwin Obaseki was re-elected as the Governor of Edo State.

Governor Obaseki, returned elected on Sunday after polling the highest votes in the keenly-contested poll conducted on Saturday, defeated his main rival and candidate of the All Progressives Congress (APC) Osagie Ize-Iyamu.

And for a former Vice President, Atiku Abubakar, Obaseki’s win is an “end to godfatherism” and a “new dawn” in Edo State.

“There is a new dawn in Edo State, and the hard-won victory of Governor Obaseki is not just a victory, but a Declaration of Independence from the anti-democratic forces of godfatherism and militarism,” Atiku who contested the presidential seat under the PDP in 2019 tweeted Sunday.

“No victory could be sweeter than this, and I heartily congratulate the Governor and the good people of Edo state for their resilience in the face of the forces arrayed against them.”

The End of Godfatherism Has Come in Nigeria.

There is a new dawn in Edo State, and the hard-won victory of @GovernorObaseki is not just a victory, but a Declaration of Independence from the anti-democratic forces of godfatherism and militarism. #EdoDecides2020 pic.twitter.com/hbo33mIhyK

Although they were fears in many quarters that the election might turn violent, Atiku said the poll was largely peaceful, describing Obaseki’s re-election as “new record” in Nigeria’s democracy.

“I also seize this opportunity to thank His Royal Highness, the Oba of Benin, Omo N’oba N’Edo Uku Akpolopkolo, Ewuare II, for the fatherly role he played as a neutral catalyst for peace,” Atiku added.

He equally lauded members of the PDP for supporting Obaseki who had defected from the APC after he was disqualified from the party’s primary, urging him to deliver good governance to the people of Edo State.

“In good times, we will walk beside you. In bad times, we will be your loyal ‘comrade’,” he assured while calling on him to extend a hand of friendship to Ize-Iyamu. “We will never be a turncoat.”

The Delta State Governor, Ifeanyi Okowa, equally sent his congratulatory message to the re-elected Edo leader and believes that another term for Obaseki is an indication that the people’s choice will always prevail.

With their loud and irrefutable votes in #EdoDecides, the people of Edo State have sent a strong message that they choose to continue under Governor Godwin Obaseki’s development agenda to Make Edo Great Again! #EdoDecides pic.twitter.com/9skm0bi0C1

“With their loud and irrefutable votes in #EdoDecides, the people of Edo State have sent a strong message that they choose to continue under Governor Godwin Obaseki’s development agenda to Make Edo Great Again!”Okowa tweeted, Sunday.

‘Power Belongs To The People’

“I congratulate my colleague and brother, Governor Obaseki on his victory at the just-concluded Edo State gubernatorial elections,”  the Governor of Bauchi State, Senator Bala Mohammed, also said in his message to the Edo Governor.

I congratulate my colleague and brother, @GovernorObaseki on his victory at the just-concluded Edo State gubernatorial elections. Your win is a victory for Edo State and our great party, @OfficialPDPNig. It also validates that truly, power belongs to the people. #EdoDecides2020 pic.twitter.com/sG78tziAzx

“Your win is a victory for Edo State and our great party, PDP.  It also validates that truly, power belongs to the people.”

‘The Beauty Of Democracy’

While hailing Obaseki for his victory, the former Senate President Ike Ekweremadu, said the development captures the “beauty of democracy.”

“And if there is a moral lesson to be learnt, it is also that no man can successfully play God, for God will always put men in their place,” the PDP Chieftain said on Sunday, expressing hopes that “we can get our elections right.”

1) Congrats to @GovernorObaseki, Shaibu, and the @OfficialPDPNig on this well-deserved victory. As someone, who was on ground to monitor the poll, I must say that compared to recent elections, #EdoElection renews the hope that we can get our elections right… pic.twitter.com/tvDyLpUJz9

Ekweremadu called on Obaseki to see his popular mandate as both an approval of his stewardship in the last four years and a call to lead Edo land on the path of greater peace, prosperity, and all-round development.

The Minority Leader of the House of Representatives, Ndudi Elumelu was not left out in the streams of messages pouring in since Obaseki’s election.

Elumelu, who described Obaseki’s re-election as well-deserving, attributed the governor’s success to his sterling performance in developing the state and empowering the people during his first tenure.

Governor Seyi Makinde of Oyo State equally commended the Edo Governor for a “well deserved victory,” and hailed the PDP for the win.

Congratulations, H.E., @GovernorObaseki and Deputy Gov Phillip Shaibu for a well-deserved victory. Well done to the National Campaign Council for Edo State of our great party, @OfficialPDPNig led by H.E., @GovWike. The victory is for the people of Edo State. #EdoNoBeLagos pic.twitter.com/gGNhgJ7Iog