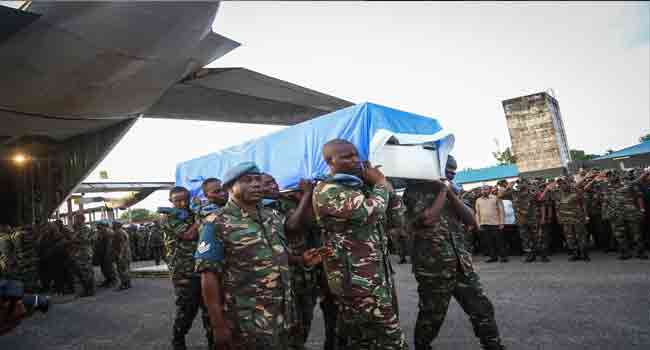 Tanzania called on Thursday for an investigation into the killing of 14 soldiers serving as UN peacekeepers in Democratic Republic of Congo by suspected Ugandan rebels.

“The Tanzanian government is asking the United Nations to conduct a thorough, transparent and genuine investigation,” Prime Minister Kassim Majaliwa said at a ceremony in Dar es Salaam in honour of the soldiers, whose bodies were repatriated on Monday.

Tanzanian army chief General Venance Mabeyo said one soldier was still missing and 44 wounded troops were being treated in hospital.

“We hope that the United Nations will do this quickly,” Majaliwa added, speaking alongside UN peacekeeping chief Jean-Pierre Lacroix.

The peacekeepers were killed on December 7 in the war-torn eastern DR Congo by gunmen suspected to be from the Allied Democratic Forces (ADF), a Ugandan Muslim rebel force. They do not claim the attacks.

The attack was the biggest single loss of peacekeepers in nearly a quarter of a century.