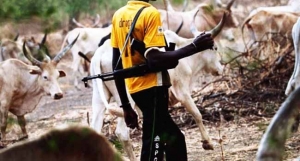 The Benue State Police Command says that it is deploying peace pact mechanism and the carrot approach to end the persistent armed herdsmen attacks on farming communities in the state.

The new Commissioner of Police, Mr Bashir Makama, disclosed this to reporters in Makurdi, the state capital in north-central Nigeria.

He urged opinion and community leaders to join the task of ensuring dialogue whenever there is a perceived grievance and not a resort to violence as a means of seeking justice.