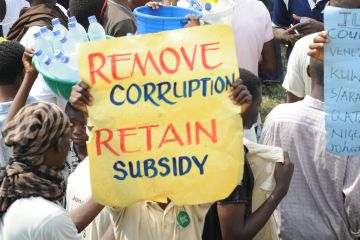 The Senate Committee on Petroleum Resources Downstream have warned the Petroleum Products Pricing Regulatory Agency (PPPRA) to beware of the return of fraudsters in the fuel subsidy scheme.
Speaking during an oversight meeting, the Chairman of the Senate Committee, Senator Magnus Abe commended the agency for cleaning up the fuel subsidy scheme by reducing the number of oil marketers from 142 to 38 as at December 2012.
The Executive Secretary of the Agency, Mr. Reginald Stanley had added that local consumption of Premium Motor Spirit (PMS) has also been brought down from 60.25 million litres per day in 2011 to 40 million litres per day in 2013.

Mr. Stanley added that claims for all cleared transactions for the last quarter of 2012 are being paid while the 2013 transaction reimbursements are in progress.