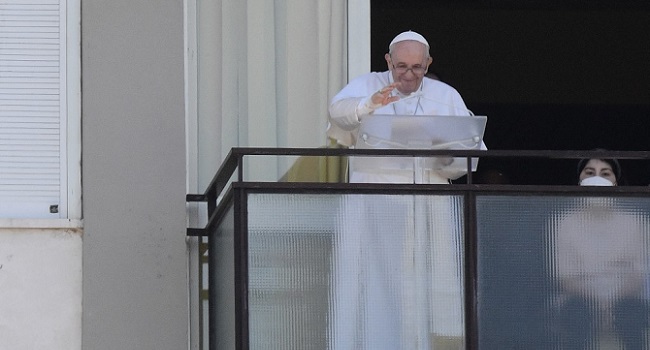 Pope Francis will not lead mass at Saint Peter’s Basilica this weekend as he continues to recover from colon surgery earlier this month, the Holy See said Friday.

“It’s completely normal, the pope continues to heal, “the Holy See said in a statement.

The 84-year-old pope will nevertheless give the traditional Angelus prayer from the window of the Apostolic Palace following mass, it added.

Mass to celebrate the World Day for Grandparents and the Elderly on Sunday will be presided over by Archbishop Rino Fisichella, president of the Pontifical Council for Promoting the New Evangelization.

Francis, who underwent an operation on his colon on July 4, was discharged from the hospital after 10 days and returned to his home within the Vatican.

He had been admitted to hospital after suffering from a type of diverticulitis, an inflammation of pockets that develop in the lining of the intestine. 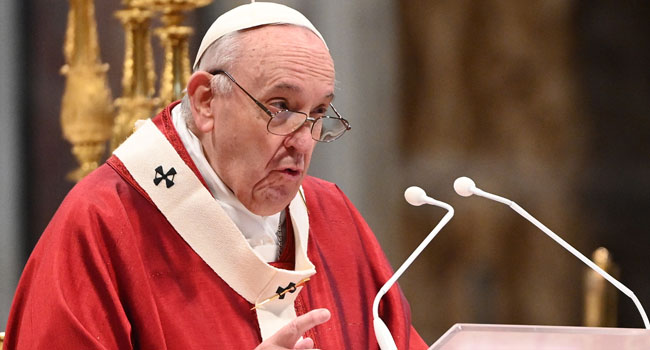 Pope Francis on Sunday urged “serious dialogue” and defended the right to peaceful protest in Colombia, mired in a month-long social crisis compounded by police repression.

“The situation in Colombia is still worrying,” the Argentinian pontiff said during his Sunday Angelus prayer address at the Vatican.

Francis said Colombia needed to advance “through serious dialogue, (whereby) fair solutions are found to the many problems it faces.”

He also called on Colombia’s security forces to “avoid, for humanitarian reasons, behaviours harmful to the population in the exercise of their right to demonstrate peacefully.”

Street protests and social unrest have swept the country in recent weeks resulting in more than 40 deaths while Colombia’s Covid-19 death toll has shot up past 80,000, exacerbating the social turmoil.

The protests began over proposed tax reforms that were swiftly shelved, but the unrest has widened into a manifestation of general anti-government sentiment. 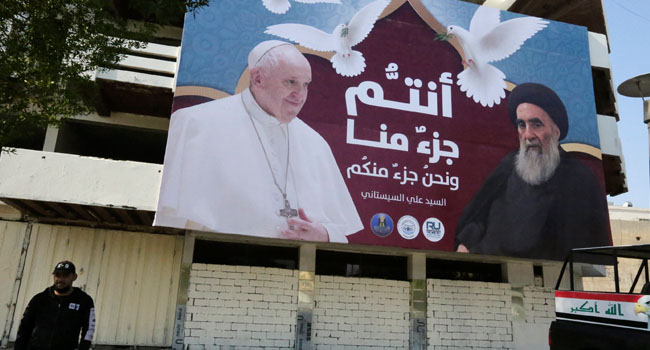 Pope Francis, on a historic trip to Iraq, will on Saturday hold a hugely symbolic meeting with Grand Ayatollah Ali Sistani, seeking to deepen his cautious dialogue with Muslim leaders.

The 84-year-old pope will visit the top Shiite cleric at his home in Najaf, the shrine city where Imam Ali, the fourth Islamic caliph and relative of the Prophet Mohammed, is buried.

Sistani, 90, is never seen in public and rarely accepts visitors, but the Argentine pontiff, always happiest among the faithful, favours direct encounters.

Francis has long hailed the power of inter-religious dialogue, symbols of peace and tolerance, without dwelling on the theological subtleties advanced by his predecessor.

Benedict XVI, who resigned as pope eight years ago, provoked years of cool relations with the Muslim world when in 2006 he quoted criticisms of the Prophet Mohammed by a 14th-century Byzantine Christian emperor.

They made a joint call for freedom of belief, although what stands out from that trip — the first by a pope to the Arabian Peninsula — was the image of the leader of the world’s 1.3 billion Catholics embracing a Sunni imam.

Sunnis account for almost 90 percent of the world’s Muslims, Shiites 10 percent — the majority in Iran and Iraq. In Iraq, the population is 60 percent Shiite and 37 percent Sunni.

With the visit to Najaf and meeting with the Shiite cleric Sistani, the pope is extending his hand to the other main branch of Islam.

She said the Najaf school of thinking on Islam became involved in inter-religious dialogue in the wake of the US-led invasion of Iraq in 2003, and the bloody civil war between Shiites and Sunnis.

Sistani has repeatedly stated that Muslims are forbidden from killing others. In 2014, however, as the Islamic State group approached Baghdad, he called on Iraqis to take up arms to drive the jihadists out.

“This visit by the pope sends a strong political message for a figure who is very much associated with the defence of Iraqis,” added Myriam Benraad, a French political scientist who specialises in the Arab world.

Sistani embodies one of the two currents of modern Shiism, that of Najaf, which makes a distinction between politics and religion.

By contrast, the school based around the holy Iranian city of Qom believes that the top religious leader should also rule the state, following the example of Iran’s supreme leader Ayatollah Ali Khamenei.

“The Shiites in Iraq want the Vatican and the western world to support them against the hold that Iran has, which wants to swallow Najaf,” said Iraqi Dominican friar Amir Jaje, a leading figure in inter-religious dialogue.

Since the pope’s visit was announced, the Shiite clergy has worked hard to ensure it includes a trip to Najaf.

The historian Pierre-Jean Luizard, a specialist on Iraq, noted that Sistani is also aware of “a moment of despair and disaffection towards everything sacred”, particularly among the young — and cannot ignore the pope’s global stature.

The pope never stops distributing the Abu Dhabi document and has also published an encyclical, “Fratelli tutti” (All Brothers), which includes numerous references to it.

No such text however is expected to be signed in Najaf.

The Abu Dhabi document called for the freedom of belief and expression, advocating full citizenship for “minorities”.

But it does not go so far to acknowledge the right to hold no belief at all, or to convert, even drawing a parallel between “atheistic, agnostic or religious extremism” and “fanatic extremism”.

“The text, written in Arabic by two Egyptians, is symbolically very powerful but its contents push against open doors,” said Jean Druel, of the Dominican Institute for Oriental Studies in Cairo.

“It deals with common issues. When Al-Azhar supports religious freedom, he means that Christians can go to mass.

“But atheism remains incomprehensible in the Arab Muslim world.”

The pope and his emissaries avoid flashpoint issues. In Abu Dhabi, Francis declared that religious freedom is “not limited only to freedom of worship”.

“Perfect freedom of religion is also the freedom to convert and change religion, as many Catholics have converted to Islam or Buddhism,” said Cardinal Leonardo Sandri, who heads the Congregation for the Oriental Churches at the Vatican, while suggesting the subject is taboo.

Nevertheless, he believes in the small steps of dialogue towards an “open Islam”, he said.

“It takes time, but it’s possible.”