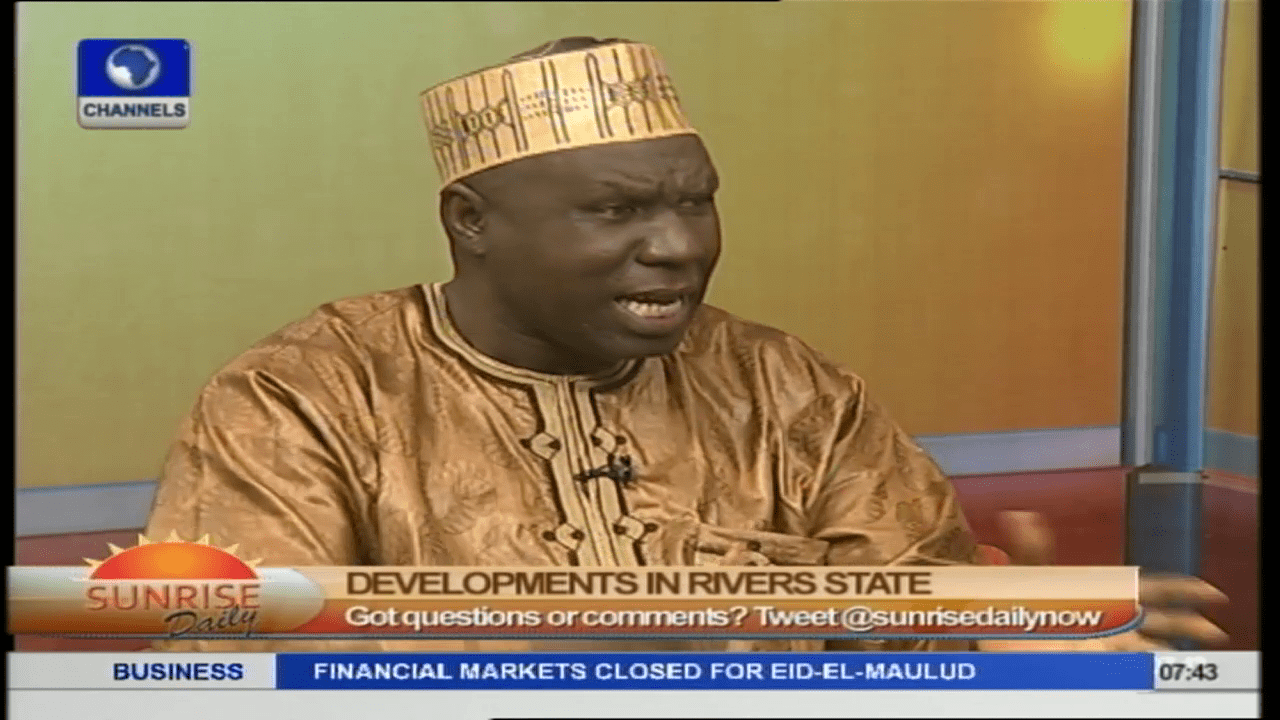 The Director of Press in the Adamawa State House, Ahmad Sajoh, on Wednesday told Channels Television that the outcry against the National Chairman of the People’s Democratic Party, Bamanga Tukur as well as the call for his removal originated from a poorly conducted party election in the northern state.

Speaking as a guest on the station’s breakfast programme, Sunrise Daily, Mr Sajoh said acts of impunity by the leadership of the PDP at the national level led to the on-going crisis which has threatened to engulf the nation.

“Beyond what we are seeing in Rivers, I can see dangers in the whole country” as issues of National Development seem to have taken the back burner while issues of ethnicity, personalities and religions have dominated discourses in the public domain.

“If the situation in Adamawa was managed properly, maybe the National Chairman (of the PDP) would not have gotten to where he is because that is the genesis of the entire crisis.”

“The whole agitations against him, the level of impunity that people are talking about today came from Adamawa,” he said.

He continued by saying that: “There was an election of the party leadership in Adamawa. That election was conducted by a panel sent by the National Secretariat. No Adamawa indigene was involved, no Adamawa person was involved.

“The panel called for nominations, screened the candidates, declared them fit to contest, conducted the elections and those that won the elections. They (panel) wrote a report (I have a copy of the report) to the National Secretariat that the election in Adamawa state was free, fair and in accordance with the constitution of the PDP. An appeal panel came and said Adamawa people have appeared to understand the meaning of working together so they passed the process.

“Shortly after that, a letter came from the National Secretariat dissolving the EXCO on the grounds that something violated the PDP constitution in the constitution of the EXCO.

“At that point, if after there was this strict argument based on the law and the documents available and if superior argument had won and the national leadership accepted that they were wrong in doing this or right in doing this and an amicable settlement was done, then this crisis would not have escalated to other states being affected, other people affected and now it’s trying to engulf the entire country,” Sajoh said.

He berated the attitude of Nigerian politicians for being unrelenting in their quest for position, adding that “most of us in politics in Nigeria are too self-centered. It’s about self and now we have also extended that same thing to the larger society by insisting that all discussions should be about individuals, about where they come from.”

According to him, the same scenario is playing out in Rivers State where the issue revolves around persons including Governor Chibuike Amaechi who had defected to the opposition party, the First Lady of the nation, Dame Patience Jonathan and others.

He described the situation in the oil-rich state ominous for the entire nation and that dishonesty on the part of the Police Commissioner, Joseph Mbu on the use of rubber bullets is a recipe for more troubles for the nation. “When people do things and don’t own up to them, it is a recipe for serious crisis in the country,” he said.

He cited the crisis which has torn apart the Central African Republic, adding that the crisis of leadership in Nigeria could create more repercussions than expected if left to degenerate.

Sajoh however expressed confidence in the power of dialogue adding that “political differences could be discussed no matter what they are without resorting to the use of violence.”