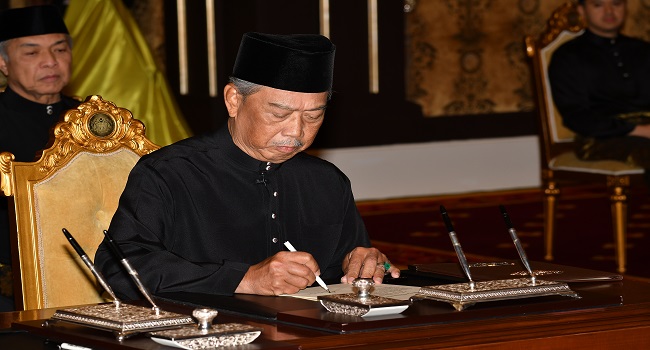 A staunch Muslim nationalist backed by a scandal-mired party was sworn in as Malaysia’s premier Sunday after a reformist government’s collapse, but ex-leader Mahathir Mohamad, 94, slammed the move as illegal.

The Southeast Asian nation was plunged into turmoil after Mahathir’s “Pact of Hope” alliance, which stormed to a historic victory in 2018, collapsed amid bitter infighting.

Mahathir, who was the world’s oldest leader, initially quit as premier but then sought to return.

He lost in a power struggle however to little-known Muhyiddin Yassin, who heads a coalition dominated by the multi-ethnic country’s Muslim majority and has faced criticism for controversial remarks about race.

The king’s decision Saturday to pick Muhyiddin as premier was greeted with shock as Mahathir’s allies claimed to have enough support, and it sparked widespread anger that the democratically elected government had been ejected.

UMNO was the corruption-riddled lynchpin of a coalition thrown out at the 2018 elections as allegations swirled that Najib and his cronies looted billions of dollars from state fund 1MDB. Najib is now on trial for corruption.

Just before Muhyiddin’s inauguration, Mahathir accused him of betrayal and said he would seek a parliament vote challenging the new premier’s support — signalling the political crisis is far from over.

“This is a very strange thing … losers will form the government, the winners will be in the opposition,” he said.

“The rule of law no longer applies.”

A candidate for prime minister must prove to the king, who appoints the position, that he has the backing of at least 112 MPs. Mahathir claims to have that number and believes Muhyiddin does not.

Mahathir’s alliance said parliament should be allowed to re-convene on March 9, as it is scheduled to do, as speculation grows the new government might seek a delay.

Muhyiddin’s inauguration went ahead Sunday morning at the national palace, although Mahathir’s alliance boycotted it.

Meanwhile public anger is growing at the ejection of the reformist alliance, with the hashtag “NotMyPM” trending on Twitter and more than 130,000 people signing a petition that said the move is a “betrayal” of voters’ choice at the 2018 poll.

Mahathir — who served a first stint as premier from 1981 to 2003 before staging a comeback two years ago — also raised concerns that ongoing court cases against Najib related to the 1MDB scandal could be affected by the change of government.

Mahathir came out of retirement aged 92 to take on his one-time protege Najib over the controversy, and has pledged to bring him to justice.

Analysts said Muhyiddin’s government was in a weak position as it was not clear whether he had a parliamentary majority, and he was a member of a tiny party without a strong support base.

He was a senior UMNO figure for decades before being sacked from the party by Najib in 2015 after criticising the handling of the 1MDB scandal, and then allied with Mahathir to oust them at the last elections.

In a volte-face, he joined hands last week with UMNO in his quest for the premiership — although he is not a member.

In addition, he lacks “the domestic legitimacy or the international legitimacy the previous government had”, Bridget Welsh, an analyst from the University of Nottingham, told AFP.

Muhyiddin once controversially described himself as “Malay first” and Malaysian second, and there are concerns race and religious relations could worsen under his Muslim-dominated coalition.

About 60 percent of Malaysia’s population are ethnic Malay Muslims and the country is also home to substantial ethnic Chinese and ethnic Indian minorities.

The “Pact of Hope” alliance had been riven by infighting between factions over who should succeed Mahathir, who had designated Anwar Ibrahim as his successor.

The political crisis began a week ago when a group of ruling coalition lawmakers joined forces with opposition parties in a bid to form a new government and push out Anwar.

In a week of fast-moving twists and turns, Mahathir and Anwar — who have a long and stormy history — briefly locked horns in a fight for the leadership.

They then joined forces again in an 11th-hour bid to stop Muhyiddin, but it proved too little, too late. 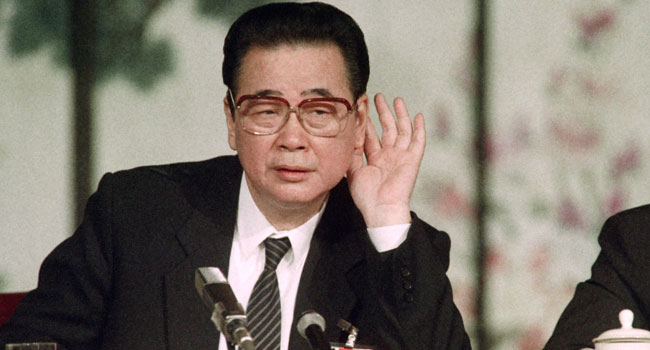 The former chairman of the National People’s Congress Standing Committee died of an unspecified illness in Beijing on Monday, Xinhua said.

Li gained notoriety worldwide as one of the key architects of the brutal breakup of mass pro-democracy demonstrations in the capital on June 4, 1989, and stayed at the top of the Communist regime for more than a decade, while remaining a hated symbol of the repression until his death.

After vast crowds of students, workers and others had been encamped for weeks in Tiananmen Square to demand change, Li proclaimed martial law on May 20, 1989.

Two weeks later, on the night of June 3-4, the military put a bloody end to the protests, killing hundreds of unarmed civilians — by some estimates more than 1,000.

Though the decision to send in the troops was a collective one, Li was widely held responsible for the bloody crackdown.

Li afterwards frequently defending the decision to fire on the demonstrators as a “necessary” step.

“Without these measures, China would have faced a situation worse than in the former Soviet Union or Eastern Europe,” he said on a tour of Austria in 1994 as his international pariah status started to wear off. 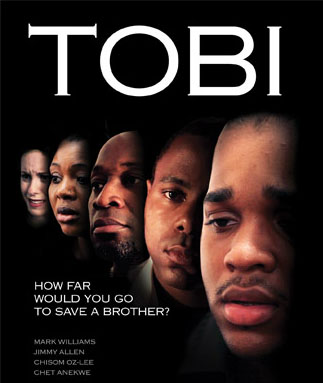 A good number of entertainment celebrities both at home and in the Diaspora have expressed their excitement at the Nigerian premiere of TOBI – a movie shot in the U.S.

The movie was premiered at the Ozone cinemas Yaba.