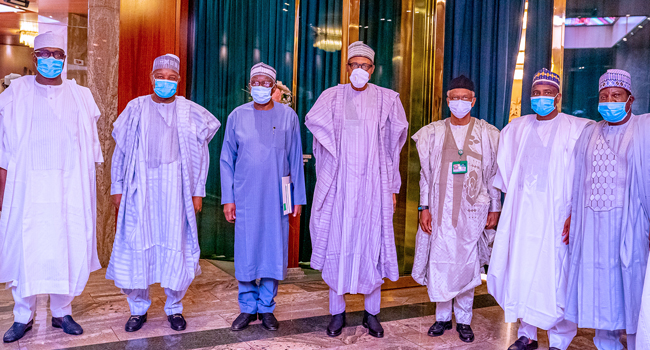 President Muhammadu Buhari Thursday met with governors from the northern part of Nigeria as the country seeks ways to contain its numerous security challenges.

The governors were led to the meeting by the Plateau State Governor and the Chairman of the Northern Governors’ Forum, Simon Lalong, and were also joined by the Chief of Staff to the President, Prof Ibrahim Gambari during the meeting held at the President Villa, Abuja.

According to the governors, the meeting was convened to review the region’s security situation and seek ways to address it.

They also pledged to work with the Federal Government in a bid to tackle the issue which they described as stifling development in the region.

President @MBuhari was in a meeting with some Northern State Governors at the State House, Abuja.#AsoVillaToday pic.twitter.com/T2fYPWjzR7

Nigeria’s northern region as well as several parts of the country have been battling various forms of security challenges including banditry, kidnapping, and herders-farmers clashes among others.

Although the Federal Government had changed the security chiefs and adopted several measures to tackle the issues, criminality appears to be on the rise and critics believe the government has not done the right thing.

Buhari himself had admitted that though the country is doing its best in taming the situation, the efforts are not good enough.

“I assure you, we are doing our best, our best hasn’t proved to be good enough, and we are getting desperate,” the 78-year-old admitted.

He, however,  gave orders to the military to ensure that in a few weeks the nation must experience a difference.