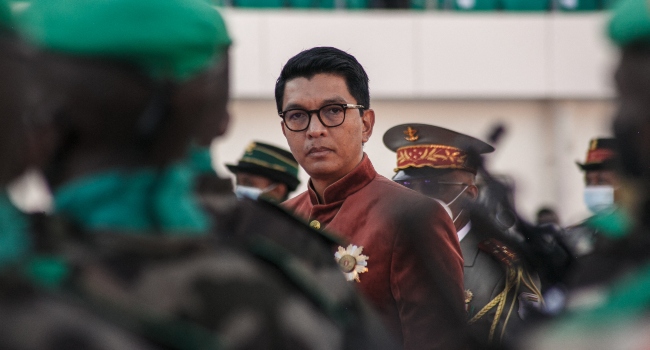 Prosecutors in Madagascar said Thursday they had foiled an attempt to assassinate President Andry Rajoelina and made several arrests.

“Several foreign and Madagascar nationals were arrested on Tuesday, July 20, as part of an investigation into an attack on state security,” prosecutor Berthine Razafiarivony said in a statement released overnight.

There was “a plan to eliminate and neutralise various Madagascan figures, including the head of state,” Razafiarivony said.

“At this stage of the investigation, which is ongoing, the prosecutor-general’s office assures we will shed light on this case,” she added.

Two French nationals are among those who were arrested on Tuesday, diplomatic sources told AFP.

The two suspects are reputedly retired military officers, according to the Taratra, a local news agency operation to the Communications ministry.

During the country’s Independence Day celebrations on June 26, the gendarmerie announced that they had foiled an assassination attempt on their boss, General Richard Ravalomanana, who is also Rajoelina’s right-hand man.

Rajoelina, 47, first seized power in March 2009 from Marc Ravalomanana with the backing of the military.

He won the last vote in December 2018 beating his main rival and predecessor Ravalomanana in an election beset by allegations of fraud.

The former French colony has had a long history of coups and unrest since gaining independence from France in 1960.

The island is internationally famed for its unique wildlife and vanilla but is heavily dependent on foreign aid. Nine out of 10 people live on less than $2 a day.

The country has been under a lockdown since the Covid-19 pandemic hit last year and its southern region is in the grips of a famine.

Former Madagascan President Andry Rajoelina has beaten his rival and predecessor Marc Ravalomanana in an election beset by allegations of fraud, the electoral commission said Thursday.

Rajoelina has returned to power after he won 55.66 percent against 44.34 percent for Ravalomanana in the run-off vote held last week, it said.

The results, announced under high security, were quickly appealed by Ravalomana.

The defeated candidate filed papers with the Constitutional Court just hours after the electoral commission announced the election’s complete results.

The court has nine days to formally name the new president after it has reviewed the petition.

– ‘Massive fraud’ –
Rajoelina meanwhile called for unity and a “democratic” transfer of power as he thanked those who voted for him and those who did not.

“I already came first in the first round, and the people of Madagascar have confirmed my victory in this second round,” he said Rajoelina.

“What matters is that the people of Madagascar were able to express themselves freely,” he added.

“My message is simple, the people of Madagascar no longer need a crisis, they need a wise, unifying leader”.

Rajoelina, 44, sat in the front row among the 200 guests in the room where the electoral commission announced the results.

A seat next to him, apparently reserved for Ravalomanana, was empty, according to an AFP journalist.

“It’s unfortunate that the other candidate is not here,” the president of the electoral commission, Hery Rakotomanana, said.

The electoral commission chief said “efforts were made to respond” to concerns raised by both candidates, which included a review of the counting software.

The two-round election was plagued by mutual accusations of vote-rigging in a country with a long history of instability.

Heavily-armed police patrolled the area around the electoral commission offices for the announcement.

No victory celebrations were witnessed on the streets of the capital.

Rajoelina and Ravalomanana are former presidents and long-time rivals who have fought a fiercely personal duel for power.

They each spent lavishly on campaigning, with promises and handouts distributed liberally to voters, who are among the poorest in Africa.

– ‘People expressed themselves freely’ –
European Union election observers have said they had not seen evidence of wrongdoing in the vote in which about five million ballots were cast.

Ravalomanana, a 69-year-old former milkman who built a business empire, had on Sunday urged supporters to protest what he called “injustice and a violation of their right to vote”.

Elected president in 2002, he was forced to resign seven years later following protests fuelled by Rajoelina, who had been elected mayor of the capital Antananarivo.

Rajoelina was then installed by the army and ruled until 2014.

He is a former events planner and successful entrepreneur with slick communication skills.

The two adversaries came a close first and second in the preliminary election in November, with Rajoelina garnering 39 percent compared with 35 percent for Ravalomanana.

The two candidates were both banned from running in the 2013 election as part of an agreement to end recurring crises that have rocked Madagascar since independence from France in 1960.

Outgoing president Hery Rajaonarimampianina was eliminated in the first round after winning only nine percent.

Just 48.09 percent of the eligible 10 million voters cast their votes in the run-off, slightly lower than in the 55 percent in the first round.

Madagascar is well known for its vanilla and precious redwood, yet is one of the world’s poorest nations, according to World Bank data, with 76 percent of people living in extreme poverty.

The island, which is also famed for its unique wildlife, is dependent on foreign aid and burdened by a long history of coups and unrest.

Candidates in Madagascar’s run-off presidential election face off on Friday, December 20 for the final round in what voters hope will mark the end of five years of political and economic uncertainty in the Indian Ocean Island nation.

Both candidates failed to score a commanding victory in October’s first round, and voters may not deliver a clear mandate to either Hery Rajaonarimampianina, a former finance minister backed by outgoing President Andry Rajoelina, or Jean Louis Robinson, an ally of Marc Ravalomanana, who was deposed by Rajoelina with the army’s help in 2009.

However, old rifts may persist, extending a crisis begun by the 2009 coup that deterred investors and donors of aid to one of Africa’s poorest nations.

Parliamentary polls also taking place on Friday could lead to one camp holding the presidency and the other controlling the legislature, perhaps forcing them into a power-sharing deal.

Smooth elections could help restore the confidence of mining and other investors, revive the battered tourist industry and re-open the aid taps to a country of 22 million people, of whom 9 out of 10 live on less than 2 US dollars a day.

Candidates took part in a televised debate on Wednesday, December 18, and while many voters say it was informative, they also said that it did not change their decision on who to back come Friday.

“There was already a debate such as this one during the time of Presidents Zafy and Didier Ratsiraka, but this time all the aspects have been addressed,” said Lanto Rakotoarisoa, an Antananarivo resident.

“The leaders say they want national reconciliation but they can’t even agree on just one debate,” said Dizo Henri, another resident of the capital.

Political analyst, Gilbert Raharizatovo, said that none of the candidates have the experience to lead the country out of crisis.

“What Madagascar is looking for now is a man who’s able to organise (things), who has a vision, so that’s called a statesman. In Madagascar, it doesn’t really exist. Why? Simply because, in my opinion, a statesman is a man who’s been trained for long years to recognise what are the ethics of governance, the deontology of governance or the deontology of politics,” he said.

Much hangs on how the loser reacts and whether the army, which had backed Rajoelina, stays in its barracks this time.

In the first round Robinson secured 21 percent of the vote, while Rajaonarimampianina won 16 percent, both far short of the 50 percent plus needed for outright victory.