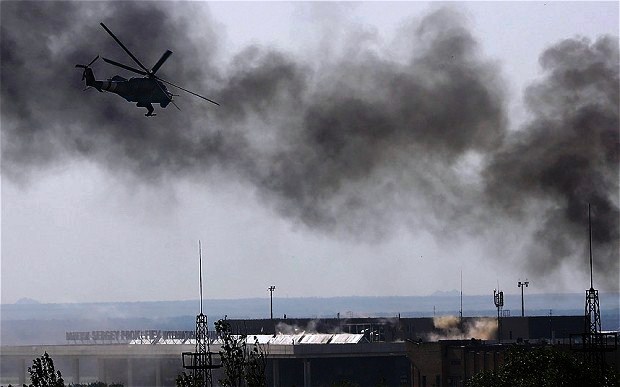 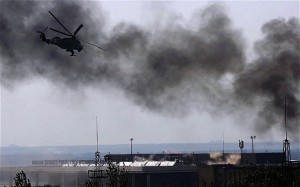 As fighting intensifies in eastern Ukraine, reports say at least 30 pro-Russia separatists have been killed in clashes at the airport in the city of Donetsk when armed separatists tried to take over the airport on Monday.

Monday’s clashes started after separatist militants stormed the Sergei Prokofiev Donetsk Airport in the early hours of the morning and ordered Ukrainian soldiers to leave. The Ukraine Army responded by sending in reinforcements and issuing an ultimatum to the local fighters to lay down their arms.

The sound of automatic weapons, heavy machine guns and rockets inside the airport compound resonated for hours while Ukrainian military aircraft was swooped overhead all day.

A local resident said that they were living in fear as many tried to flee the area.

“I just came back from work and saw a gunship flying above my house. We were almost scared to death.”

As the situation intensified, the Co-Chairman of the Donetsk People’s Republic placed the city under martial law.

After hours of fighting, government forces managed to overwhelm some of the positions of local armed forces outside the airport and forced the local fighters to evacuate some of their wounded.

The airport serves a city of 1 million people that the rebels have proclaimed capital of an independent “People’s Republic”, and where they succeeded in blocking all voting in Sunday’s election.

Their attempt to seize the airport may have been intended to prevent President-Elect, Petro Poroshenko from travelling there, as he had said that his first trip in office would be to visit the restive east.