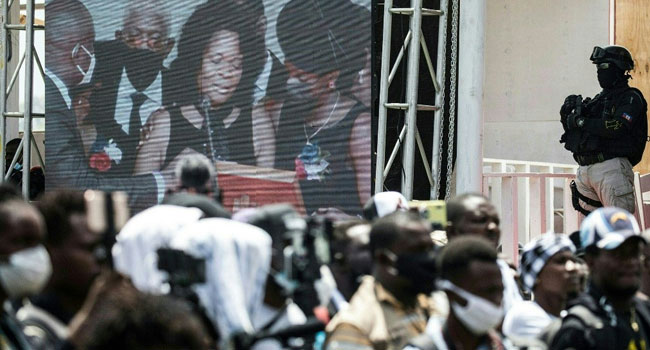 The United States announced on Thursday it has named a special envoy to help Haiti get back on its feet after its president’s assassination and work toward holding long-overdue elections.

The envoy is veteran foreign service officer Daniel Foote, who has served before as deputy chief of mission in Haiti and as the US ambassador to Zambia.

Foote will lead America’s “efforts to support the Haitian people and Haiti’s democratic institutions in the aftermath of the tragic assassination of Jovenel Moise,” the State Department said.

Foote, it added, “will engage with Haitian and international partners to facilitate long-term peace and stability and support efforts to hold free and fair presidential and legislative elections.”

Moise was assassinated in his residence on July 7, plunging the Caribbean country wracked by poverty, corruption, political instability, and gang violence further into crisis.

The last prime minister named by Moise, Ariel Henry, took power Tuesday with a promise to restore order and organize elections as sought by the international community.

Moise, 53, had ruled Haiti by decree after legislative elections due in 2018 were delayed in the wake of multiple disputes, including on when his own term ended. Haiti has no working parliament now.

Haitian authorities, with the help of the US Federal Bureau of Investigation, are still investigating the murky motives for Moise’s assassination.

More than 20 people, many of them retired Colombian military personnel, have been arrested in connection with the killing.

Haitian police have accused a Haitian doctor with ties to Florida, Christian Emmanuel Sanon, of being a mastermind of the assassination plot and having “political objectives.” He is among those under arrest.

The US exerts strong influence over Haiti, which it occupied militarily from 1915 to 1934.

But President Joe Biden has so far turned down a Haitian request to send US troops to secure key infrastructure sites in the chaotic aftermath of the assassination. 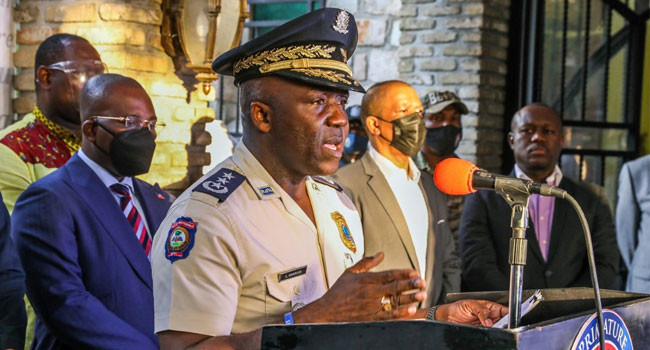 Haitian police announced on Sunday they had arrested a Haitian national “who had political objectives” in recruiting the gunmen who assassinated President Jovenel Moise last week.

“This is an individual who entered Haiti on a private plane with political objectives,” said Leon Charles, head of the Haitian National Police.

Christian Emmanuel Sanon, 63, who is of Haitian nationality, arrived in the island nation in June accompanied by several Colombians, according to details provided at a press conference.

Several Haitian ministers were also at the conference.

“The mission then changed,” Charles said, explaining that the intent had originally been to arrest Moise, and the operation was mounted from within the country.

Eighteen Colombian citizens have been arrested since Wednesday. By interrogating them, the Haitian police learned that Sanon had recruited 26 team members via a Florida-based Venezuelan security company named CTU.

“When we, the police, blocked the progress of these bandits after they committed their crime, the first person that one of the assailants called was Christian Emmanuel Sanon.

“He contacted two other people that we consider to be the masterminds of the assassination of President Jovenel Moise,” Charles said, without disclosing the identity of the two other suspects.

Members of the US Federal Bureau of Investigation (FBI), State Department, Justice Department, National Security Council, and Department of Homeland Security arrived Sunday in Haiti and met with the director-general of police.

According to Haitian authorities, the 28-member hit squad burst into Moise’s family home and opened fire on him and his wife, Martine.

The president was killed and his wife gravely injured. She was airlifted to a Miami hospital for treatment.

Moise’s assassination has plunged already troubled Haiti — the poorest country in the Americas — into chaos.

Amid deep uncertainty over its political future, the international community has called on the impoverished Caribbean country to go ahead with presidential and legislative elections slated for later this year.

The US delegation met Sunday with the main actors in Haiti’s government.

“I met with the US delegation and together we welcomed the resolution of the Senate that chose me as interim president of the Republic,” Joseph Lambert, president of the Haitian Senate, tweeted Sunday evening.

The delegation also met with interim Prime Minister Claude Joseph, who says he is still in charge.

US officials did not immediately respond to requests for comment.

No police officers were injured during the operations to arrest the Colombian alleged mercenaries, three of whom were killed in the process. 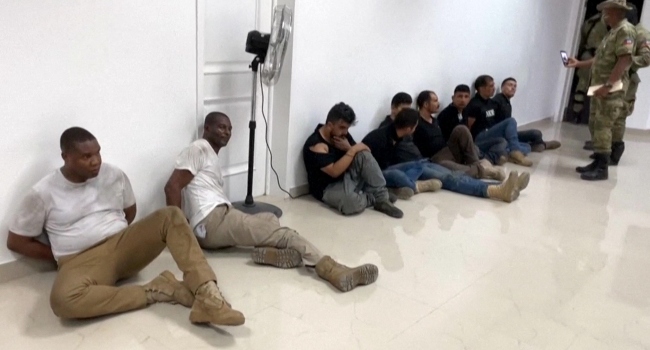 At least 28 people carried out the assassination of President Jovenel Moise, Haitian police said Thursday, adding that 26 of them were Colombian and two were Americans of Haitian origin.

“We have arrested 15 Colombians and the two Americans of Haitian origin. Three Colombians have been killed while eight others are on the loose,” national police director-general Leon Charles said at a news conference.

On Wednesday police said four of the suspects had been killed. Charles did not explain the discrepancy.

He also said the “weapons and materials used by the assailants have been recovered.”

Charles spoke a day after Moise and his wife Martine were attacked by gunmen at their private residence in the capital Port-au-Prince.

Moise was shot dead in the early morning attack, and his wife was wounded. She has been taken to Miami by air ambulance and authorities have said her condition is stable.

The poorest country in the Americas now has no president or working parliament and two men claiming to be in charge as prime minister.

Charles vowed the hunt for the other alleged assassins would continue.

“We will strengthen our investigation and search techniques to intercept the other eight mercenaries,” he said. 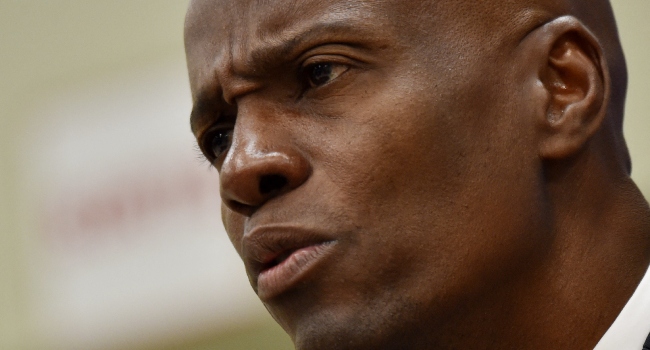 Haitian police were on Thursday hunting for more gunmen behind the assassination of President Jovenel Moise after killing or capturing six “mercenaries”, with the nation under a state of siege.

Security forces engaged in a fierce shootout with the suspected assailants in the capital, Port-au-Prince early Wednesday after the overnight attack on the president’s private residence.

Four gunmen were killed by Haitian police, and two more taken into custody, while other members of the hit squad are at large, Police Chief Leon Charles said.

Officials have not identified the suspects or said what their motives were for shooting dead Moise and wounding his wife Martine, who survived.

The assassination has pitched the already impoverished and violence-plagued Caribbean nation into further turmoil.

Interim Prime Minister Claude Joseph declared a national “state of siege” and said he was now in charge.

The UN Security Council was due to hold an emergency meeting over the crisis on Thursday as Haiti enters a two-week mourning period for the head of state.

Charles, the head of Haiti’s national police, vowed to catch the perpetrators.

“We are chasing them so that either in the exchange of fire they will be killed or we will apprehend them,” he said.

He added that three police officers who had been taken hostage had been recovered.

The airport was closed in Port-au-Prince, but witnesses said the city was quiet with the streets deserted and no extra security forces on patrol.

The attack took place around 1:00 am (0500 GMT) at Moise’s home. Shell casings could be seen on the street outside as forensics experts combed the scene for evidence. A nearby car was peppered with bullet holes.

Magistrate Carl Henry Destin told the Nouvelliste newspaper that the president’s body had twelve bullet holes in it, from large caliber rifles and smaller 9mm weapons to the forehead, chest, hips, and abdomen.

“The president’s office and bedroom were ransacked. We found him lying on his back, blue pants, a white shirt smeared with blood, his mouth open, his left eye gouged out,” he said.

Moise’s wife was first treated at a local hospital then rushed by air ambulance to the Ryder Trauma Center in Miami.

Joseph said she was “out of danger”, later adding that “her situation is stable.”

Their daughter Jomarlie was in the home during the attack but hid in a bedroom, Destin, the magistrate, said.

He said a maid and another domestic staff member had been tied up by the commandos who allegedly shouted “DEA operation” as they burst in.

Joseph said the president was “assassinated at his home by foreigners who spoke English and Spanish.”

“This death will not go unpunished,” Joseph said in an address to the nation.

The unpopular Moise had ruled Haiti, the poorest country in the Americas, by decree after legislative elections due in 2018 were delayed.

In addition to the political chaos, kidnappings for ransom have surged in recent months.

The capital’s streets were at a standstill in the hours after the assassination, with just a handful of citizens outdoors.

“We didn’t expect it. This is another earthquake in Haiti,” said a mother of two who gave her name only as Bernadette, referring to deadly 2010 quake.

Haiti will observe two weeks of national mourning from Thursday.

Joseph — who spoke by telephone to US Secretary of State Antony Blinken Wednesday — has only been in his post for three months and was due to step down within days after Moise named his replacement on Monday.

As well as presidential, legislative and local elections, Haiti was due to hold a constitutional referendum in September after it was twice postponed due to the coronavirus pandemic.

US President Joe Biden condemned the killing as “horrific” and said Washington was ready to assist in any way.

Washington also called for Haiti to proceed with the elections, with the State Department spokesman saying a fair vote would “facilitate a peaceful transfer of power to a newly elected president.”

Moise, a successful businessman, burst onto the political stage in 2017 and campaigned as a populist. He was sworn in in February 2017.

The end date of his mandate however became the source of a standoff, as Moise maintained that his term of office ran until February 7, 2022, but others said it ended on February 7, 2021.

The disagreement is because Moise was elected in a 2015 vote that was cancelled for fraud, and then re-elected in November 2016.

Without a parliament, the country fell further into crisis in 2020.

Many feared Haiti could tip further into violence.

“How much worse can hell get?” asked Haiti expert Irwin Stotzky at the University of Miami.

“Haiti faces even more violence and death and failure as a democratic nation than ever before, which is hard to imagine given its recent and chaotic history.”

Henry, 71, is close to the opposition, but his appointment was not welcomed by the majority of opposition parties.