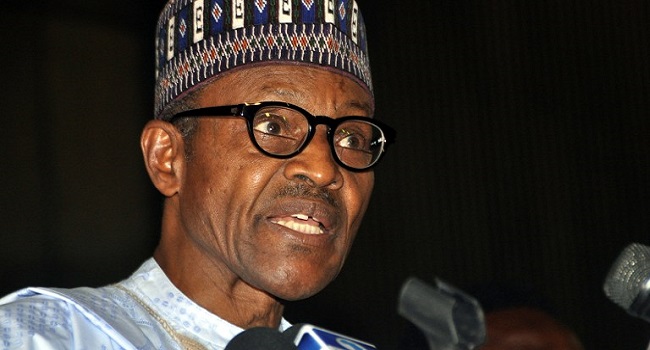 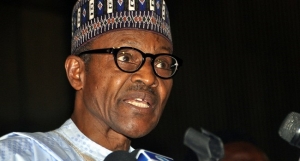 President Muhammadu Buhari has called on Nigerians to be patient and accept democracy not as a system of government but as a lifestyle in order to ensure development of the country.

The President said this when he paid homage to the Emir of Daura, Alhaji Umar Faruk Umar, after attending the Juma’at prayer at the Low Cost Housing Mosque in Daura, Katsina State.

The President, who delivered his speech in Hausa, urged those who were aggrieved after the 2015 elections to seek redress through democratic means and institutions, noting that Nigeria is adopting democracy from the western nations and learning fast by avoiding mistakes made when studying the weaknesses and strengths of those nations.

According to the President , if Nigerians decide to be hasty, some avoidable mistakes can be made, urging that elections at all levels must be conducted based on democratic principles.

President Buhari also urged those interested in elective positions to look for a political platform of their choice, declare their interests and the party would support them.

He said that in 2002 when he joined politics, many people did not give him a chance because they knew his antecedents as a military officer but added that the 2015 polls had clearly shown that it is God that chooses who becomes a leader.

President Buhari said that he decided to contest elections because of his commitment to serve the people and not to be served or to amass wealth.

He added that he had served the nation in different capacities in the past and had not had so much money in the banks either locally or abroad or anywhere in the world.

He said that all he had over time is “integrity and commitment to serve the people” adding that he would fulfil his promises to the people.

The Emir of Daura, Alhaji Umar Faruk Umar, had earlier said he had known Buhari for his consistency which had become the hallmark of his integrity. 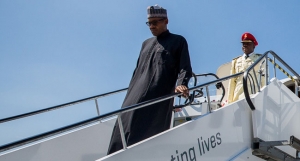 The Presidency has reacted to statements credited to President Muhammadu Buhari, saying his age would limit his performance, stating that “Buhari is like an old wine that has got tastier”.

Buhari had told a gathering of Nigerians living in South Africa that ”I wish I became Head of State when I was a governor. Now at 72, there is a limit to what I can do.”

The Special Adviser to the President on Media and Publicity, Mr Femi Adeshina, in a statement said ”though the President is 72, his persona has not changed”.

Read in full the statement below.

On Monday evening President Muhammadu Buhari spoke with the Nigerian community at the Nigerian Consulate in Johannesburg, South Africa.

Speaking extempore, because according to him, he wanted to “speak from the heart,” the President urged them to be good ambassadors of Nigeria, a country he went to the warfront to keep together.

”Still extolling the virtues of our country, Nigeria, the President, who had served as a military governor of the then North-Eastern State at 33 years old, declared:”I wish I became Head of State when I was a governor. Now at 72, there is a limit to what I can do.”

The above comments have been reported by some newspapers to mean that the President was saying he was too old to cope with the demands of his office. Far from it.

As the saying goes, ”old wines are tasty” and the President Buhari we have today is a man, like old wine, that has got tastier. At 72, yes, he can’t be called a youth, but he has in quantum the wisdom, the patience, temperance and forbearance that age brings. And all these virtues he has brought to the Presidency, to make a difference in our national life.

The President assured the Nigerian community in South Africa that his Administration will make  a positive impact on the country. And that he would do.

Insecurity as symbolized by insurgency will be brought to an end, corruption will be fought to a standstill, employment will be created for the teeming army of unemployed, the economy will be revived, and the quality of life of Nigerians will take an upward swing again. These will not come by a sudden flight, but they will happen in the life of this Administration.

At 72, the Buhari persona has not changed. He remains the simple, honest, incorruptible patriot he has always been. And because Nigerians earnestly desired change, that was why they voted for him overwhelmingly at the general elections in March, this year. All the virtues and values of the Buhari persona will be deployed into governance in the weeks and months ahead.

The Nigerian community in South Africa was enthralled as President Buhari spoke with them on Monday. In fact, leaving the venue was an effort, as they swarmed round the President, who shook hands with as many of them as he could.

They took his message well. That is the essence of good wine. It gets better with age. And it is a message for all Nigerians, both at home and in the Diaspora.

Uche Okoro, the Special Assistant, Research and Strategy to the Chairman, Nigerian Electricity Regulatory Commission (NERC), Sam Amadi on Tuesday blamed the reported incidences of overestimated billing by the Power Holding Company of Nigeria (PHCN) to corruption in the electricity distribution companies.


Mr Okoro, who was a guest on Channels Television’s breakfast programme, Sunrise Daily, assured Nigerians that once the distribution companies are fully concessioned, the cases of estimated billing will be a thing of the past.

He also spoke about the plan of the NERC to ensure that all electricity consumer get the prepaid meter before the 18 month deadline set by the commission.

Watch the video below for the complete discussion. 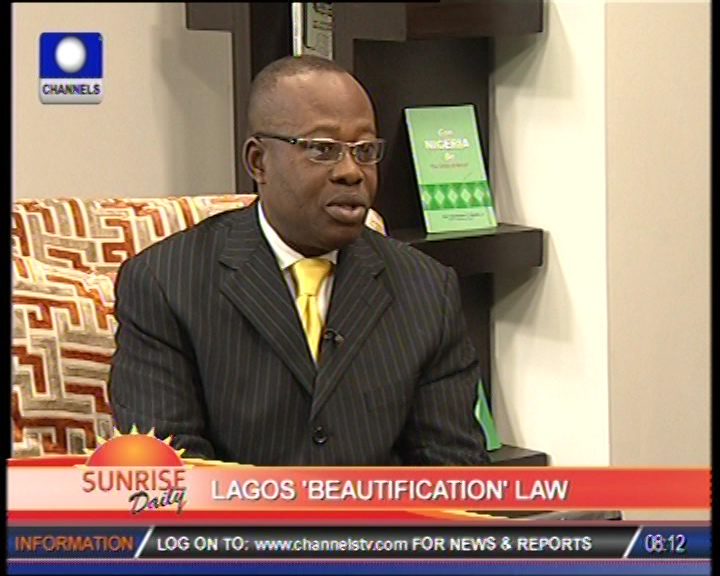 The Chairman of the Nigerian Bar Association (NBA), Ikeja branch, Onyekachi Ubani on Monday urged the Lagos State government to use persuasion in enforcing the new Parks and Gardens law which was recently established in the state.

The new law makes it mandatory for landlords of landscapes to beautify the perimeter areas of their properties. Violation of this law, according to the commissioner, shall warrant the penalty of N250, 000 or any amount the state shall incur in doing same on behalf of the property owner.

Mr, Ubani, who was a guest on Channels Television’s breakfast programme, Sunrise Daily, said while it is important to maintain a decent and clean environment, the government should also consider the living standard of residents of Lagos while enforcing the law.

Watch the video below for the complete interview with Mr Ubani.

The Lagos State Commissioner for Environment, Tunji Bello on Tuesday said that it was necessary for the state government to establish the new Parks and Garden Law to ensure that the reputation of the state changes from the dirtiest to the cleanest cities in the world.

The agency is expected to manage all the parks and gardens and enforce the laws.

The new law makes it mandatory for landlords of landscapes to beautify the perimeter areas of their properties. Violation of this law, according to the commissioner, shall warrant the penalty of N250, 000 or any amount the state shall incur in doing same on behalf of the property owner.

According to Bello, all houses in the Lagos metropolis, no matter how small or congested must have flowers planted at their perimeters or the owners will face the law if they fail to comply.

Following the establishment of the law, critics have kicked against it insisting that the government does not have the right to punish any landlords for not beautifying their property.

Mr Bello however said the aim of the law is not to punish Lagosians but to ensure that the environment is liveable.

Watch the video below for the complete interview. 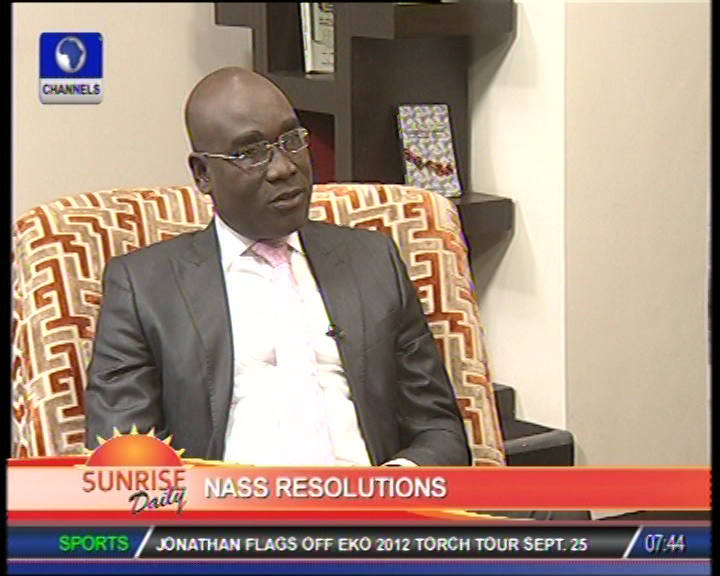 A lawyer, Ikechukwu Ikeji on Monday said the various arms of government in Nigeria should show respect for one another insisting that the executive arm should “do unto others what you expect them to do to you.”

Mr Ikeji, who was a guest on Channels Television’s programme, Sunrise Daily, was responding to questions surrounding the controversial comments reportedly attributed to the Minister of Information, Labaran Maku.

Mr Maku was reported to have said that the position of the senate asking President Goodluck Jonathan to reverse the issuance of N5000 note was advisory and can either be implemented or ignored.

Mr Ikeji however said though the executive arm of government is not duty bound to implement the resolutions of the National Assembly, it must accord respect for such resolutions.

Watch the video below for the complete interview: 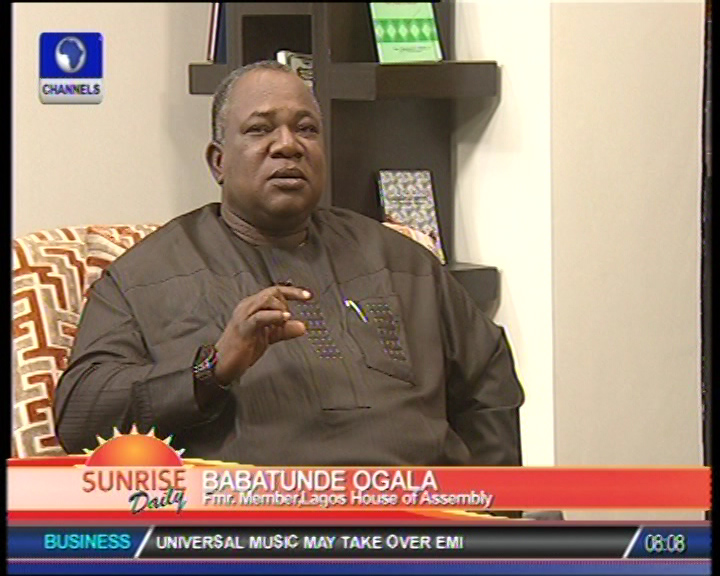 A lawyer and former member of the Lagos State House of Assembly, Babatunde Ogala on Monday said the comments credited to the Minister of Information, Labaran Maku about the resolutions of the Nation Assembly is irresponsible.

Mr Maku was reported to have said that the position of the senate asking President Goodluck Jonathan to reverse the issuance of N5000 note was advisory and can either be implemented or ignored.

Speaking as a guest on Channels Television’s breakfast programme, Sunrise Daily, Mr Ogala said the information minister should have been more tactical in his comments.

“I guess we are coming from statement that was attributed to the information minister, which I would say with all respect was most irresponsible. He could have been more tactical,” he said.

Watch the video below for the former lawmaker’s comment on the relationships between the three arms of governments.