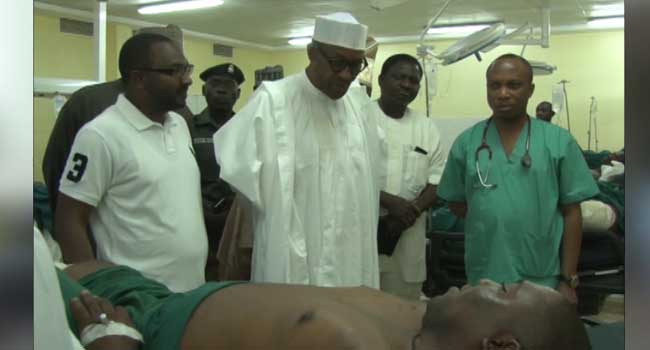 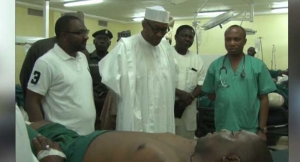 President Muhammadu Buhari has visited the National Hospital, Abuja, to see victims of the bomb blast.

The President who spent a few minutes with hospital management, also promised to investigate the attack.

Latest report from the Federal Capital Territory (FCT) on the Kuje bombing says calm has returned to the area after Friday’s bomb blasts.

13 of the 24 people admitted in the hospital are said to have been discharged on Sunday afternoon while death toll remains 20.

The multiple bomb attack went off in two satellite towns in Abuja on Friday, October 2.

President Buhari has condemned the attack, calling it a cowardly action by those who carried out the crime and promised to end extremism in the country. He has also given a deadline of December to the military to end Boko Haram.

Also, the Senate President, Bukola Saraki, condemned the blast, saying that the renewed attacks are signs that the days of Boko Haram are numbered.

He also commended the security agencies for their quick response to the incidents in Nyanya and Kuje, especially the prompt evacuation of both the dead and injured to medical facilities where they are receiving needed medical attention.