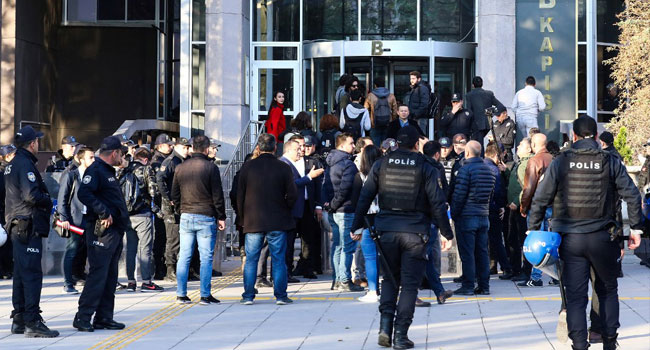 Eighteen Turkish students and a lecturer went on trial on Tuesday for taking part in a banned LGBTI Pride event at an Ankara university.

The defendants face up to three years in prison if convicted of “unlawful assembly and protest” and “refusing to disperse” in a trial deemed “farcical” by rights groups.

One of the 18 students also faces up to two years for insulting a police officer with hand gestures.

Homosexuality has been legal throughout modern Turkey’s history, but LGBTI individuals face regular harassment and abuse.

The pride event at the prestigious Middle East Technical University has taken place every May since 2011.

But university bosses banned this year’s event and police used pepper spray, plastic bullets and tear gas to break it up.

Diplomats from several European embassies, including Denmark and Sweden, attended the packed hearing.

Lawyers and rights groups urged the court to immediately acquit the defendants.

“The ban of the Pride march lacks legal grounds, and these brave students and others who defied it had their right to freedom of expression and peaceful assembly violated,” Sara Hall of Amnesty International said in a statement.

Police did not allow supporters to read a statement outside the courthouse.

Defendant Melike Irem Balkan told the court there were “no legal grounds” for banning the event, noting that it has taken place “peacefully” in previous years.

The Ankara governor’s office banned all LGBTI events in November 2017, saying they could “provoke reactions” in society, but the ruling was overturned by a court in the capital in April.

LGBTI events have faced difficulties since the Islamic-rooted government of President Recep Tayyip Erdogan came to power in 2003.

Authorities in Istanbul have banned the city’s Pride march for the past five years, and used tear gas to break up this June’s event.

ILGA-Europe, an umbrella organisation for LGBTI groups, called for “a thorough and impartial investigation into the excessive use of force” against the Pride marchers.

It places Turkey in the bottom three European countries, alongside Armenia and Azerbaijan, for equality laws and policies.