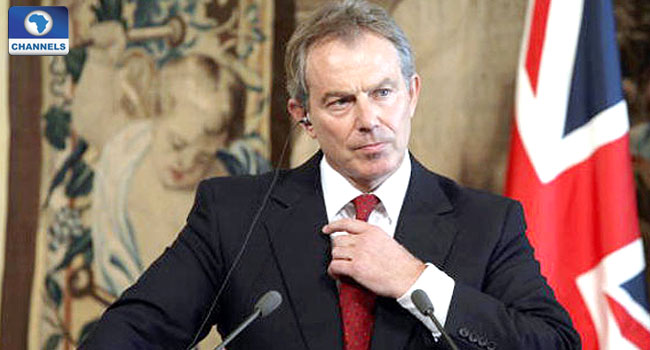 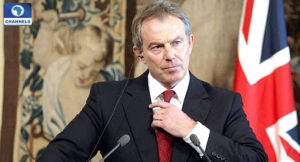 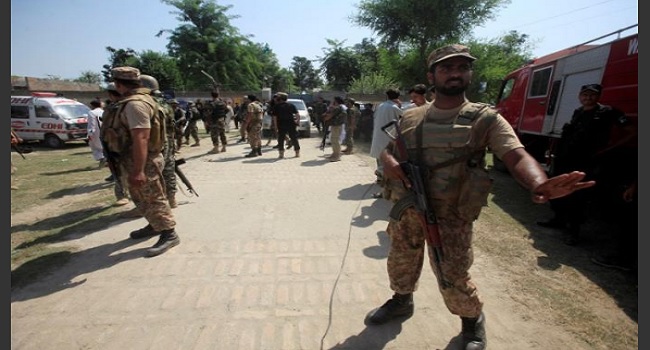 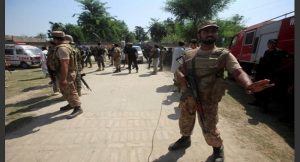 Two bombs killed at least 12 people and wounded dozens outside a court complex in northwest Pakistan on Friday, a rescue official said, hours after militants killed two people in a Christian neighborhood in the same region.

Both attacks were claimed by Jamaat-ur-Ahrar, a breakaway Pakistani Taliban faction believed to be behind some of the past year’s deadliest attacks, including last month’s bombing of lawyers in the city of Quetta that killed 74 people.

The bodies of policemen, lawyers and other civilians were recovered, said Haris Habib, chief rescue officer in the city of Mardan in Khyber Pakhtunkhwa province.

“First there was a small blast followed by a big blast,” Habib told Reuters.

The twin attacks in the northwest came one day after Pakistan’s army touted the successes of its fight against myriad armed jihadist groups, though a spokesman acknowledged there was still a long way to go.

Prime Minister Nawaz Sharif said Friday’s latest bombing would “not shatter our unflinching resolve in our war against terrorism”.

“These receding elements are showing frustration by attacking our soft targets. They shall not get space to hide in Pakistan,” Sharif said in a statement.

“We appeal to civilians to remain away from law enforcement installations and these un-Islamic courts. We will target them more,” he said.

More than 20 people were killed in an attack in December on a government office in Mardan, which was also claimed by Jamaat-ur-Ahrar. 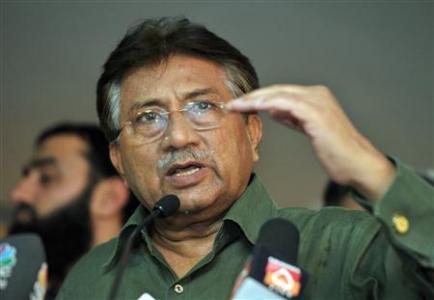 A court in Pakistan has formally indicted former military dictator Pervez Musharraf on Tuesday with the murder of former premier Benazir Bhutto who was assassinated in 2007.

“He should be tried,” the public prosecutor, Mohammad Azhar, told reporters after a brief hearing in the city of Rawalpindi during which the three charges of murder, conspiracy to murder and facilitation of murder were read out to Musharraf.

The indictment of the army chief who seized power in a 1999 coup – once Pakistan’s most powerful man – is an unprecedented event in a nuclear-armed country ruled by the military for half of its 66-year history.

The case has also shattered an unwritten rule that the top military brass are untouchable as the South Asian country tries to shake off the legacy of decades of military rule under the new government of Prime Minister Nawaz Sharif.

Musharraf, who made no public remarks during his appearance, denied all the charges against him, a lawyer from his defense team told Reuters. Journalists were not allowed in the court room for the hearing which lasted just about 20 minutes.

“All the cases against Musharraf are fabricated. He denied all the charges,” said Afshan Adil, the lawyer. The next hearing was set for August 27.

Bhutto was killed in a gun and suicide bomb attack after an election rally, weeks after she returned to Pakistan from years in self-imposed exile.

The government at the time blamed Pakistani Taliban militants and Musharraf has said he warned her of the danger she faced.

Hundreds of police were deployed along the main road leading to the court as well as on rooftops as Musharraf’s car arrived.

On August 6, the court delayed the widely expected indictment because it was too dangerous for Musharraf to attend the proceedings due to threats to his life. 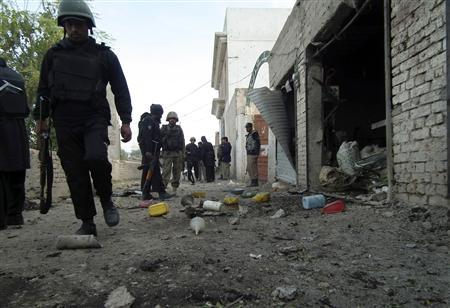 Pakistan’s Taliban plan to carry out suicide bombings during Saturday’s election in a bid to undermine the poll, according to a letter from the leader of the militant group.

Pakistani Taliban leader Hakimullah Mehsud, in a message to the group’s spokesman, outlined plans for attacks, including suicide blasts, in all four of the country’s provinces.

“We don’t accept the system of infidels which is called democracy,” Mehsud said in the letter, dated May 1, and obtained by Reuters on Thursday.

Since April, the al Qaeda-linked Pakistani Taliban have killed more than 100 people in attacks on candidates and rallies, particularly those of secular-leaning parties, in a bid to undermine elections they regard as un-Islamic.

The attacks have prevented candidates from the three main parties in the ruling coalition from holding big rallies. Instead, they have relied on door-to-door campaigning or small meetings in homes or on street corners.

However, the militants have not attacked the main opposition party led by former Prime Minister Nawaz Sharif, which has courted support from groups accused of supporting militancy.

Sharif, who is seen as favorite to become the next prime minister, says Pakistan should reconsider its support for the U.S. war on Islamist militancy and suggests he would be in favor of negotiations with the Taliban.

Nor have the Taliban attacked former cricketer Imran Khan’s party, which advocates shooting down U.S. drones and withdrawing the Pakistani military from insurgency-infested ethnic Pashtun areas along the Afghan border.

The letter from Mehsud is bound to raise fears of attacks during the historic vote.

Pakistan’s military said on Thursday it would send tens of thousands of troops to polling stations and counting centers to prevent the Taliban from disrupting the election.

The polls, already Pakistan’s most violent, marks the first time that a civilian government will complete a full term and hand over to another administration.

The Taliban are blamed for many of the suicide bombings across Pakistan, a nuclear-armed strategic ally.

Army spokesman Major General Asim Bajwa said 300,000 security officials, including 32,000 troops, had been deployed in Punjab, the most populous province.

“Definitely they have reports and obviously they have made a plan to counter that,” newspapers quoted him as saying, referring to security agencies getting threats of violence from the Taliban.

Another 96,000 security forces would be deployed in the northwest of Pakistan, where the Taliban operate from strongholds.

The military has ruled Pakistan for more than half of its 66-year history, either through coups or from behind the scenes.