Calls for zoning of the National Chairmanship of the Peoples Democratic Party (PDP) to the southwest again resurfaced at an enlarged stakeholders and leaders’ forum in Ibadan, the Oyo State capital.

In a nine-point communique read by a former Minister of Sports, Professor Taoheed Adedoja, leaders of the PDP from all the southwest states in Nigeria resolved to support the ongoing reconciliation move by the national leadership of the party.

They, however, noted that all interests must be considered and harmonised.

In various submissions, the leaders admitted that the PDP was fractured and needed to be mended by genuine interests from all stakeholders.

They listed the priorities on their agenda to include strategies to retain power in Ondo State and the move to get back their mandate in Edo State.

They mandated all states and zones across Nigeria to put heads together and constitute a new peace committee to address grievances militating against unity in the PDP.

A PDP chieftain, Mr Shuaibu Oyedokun, chaired the forum which held on Monday with the theme: “Working Together To Regenerate Our Party In Line With the Spirit of the Founding Facilitators”. 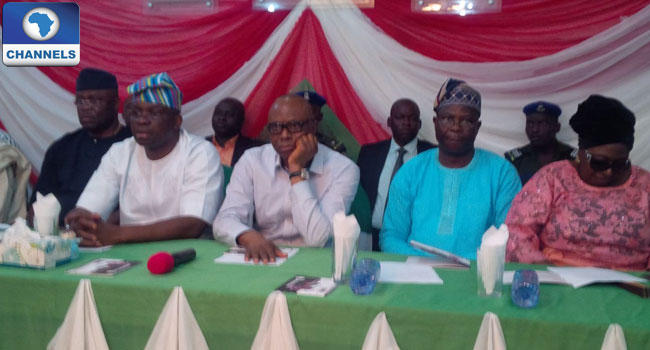 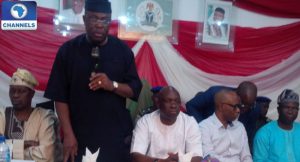 Efforts of members of the Peoples Democratic Party (PDP) in the South-west region of Nigeria to put forward a strong candidate for the chairmanship of the party appear to have hit a brick wall on Monday.

A meeting of the leaders of the party in the region held on Monday in Akure, the capital of Ondo State, ended without agreement on who becomes the candidate for the national chairmanship position of the party.

The national leadership of the party had earlier zoned the position to the south-west and at the meeting, leaders of the party were expected to agree on a consensus candidate ahead of the national convention planned to hold on August 17 in Port Harcourt, River State.

Briefing reporters after the meeting held at the Government House of Ondo State, the factional South-west Zonal Chairman of the party, Dr. Eddy Olafeso, revealed that the chairmanship was zoned to Lagos and Ogun States, while the deputy publicity secretary position went to Osun and Oyo; and the treasurer was zoned to Ekiti and Ondo States.

One of the chairmanship aspirants, Professor Taoheed Adedoja, from Oyo State, however, disagreed with the zoning arrangement insisting that all the aspirants must be allowed to test their popularity.

Another aspirant, Mr Bode George from Lagos State commended the oneness and cohesion of the party in the zone, expressing hope that all the issues in the party would be amicably resolved.

While the plan for the convention is ongoing, Senator Ali Modu Sheriff is still claiming the chairmanship position, with a court ruling in his favour.

He had approached a court to stop the party from holding the planned convention, insisting that he remained the chairman of the party.

Senator Sheriff was removed by some members of the at an earlier Convention held in May, with a caretaker committee established.

The caretaker committee has set up two committees in preparation for the planned convention.

After Senator Sheriff’s removal, he insisted that a court order had stopped the convention from holding, an order he said led to his announcement of the convention’s postponement before he was removed by some members of the party.

On July 28, a Federal High Court sitting in Abuja affirmed Senator Sheriff as the authentic national chairman of the Peoples Democratic Party (PDP).

He, however, said that although he had the powers to nullify the ruling of the Port Harcourt division of the Federal High Court, which recognised the Makarfi-led leadership, he would not do so because there was no application to that effect before him.

Earlier on July 27, Senator Sheriff and eight others approached the Federal High Court, Abuja for an order of interlocutory injunction restraining the Independent National Electoral Commission (INEC) and the party from conducting the national convention slated for August 17.

The court is yet to give its verdict on the request and the Senator Makarfi-led Caretaker Committee is going ahead with plans for the proposed convention.