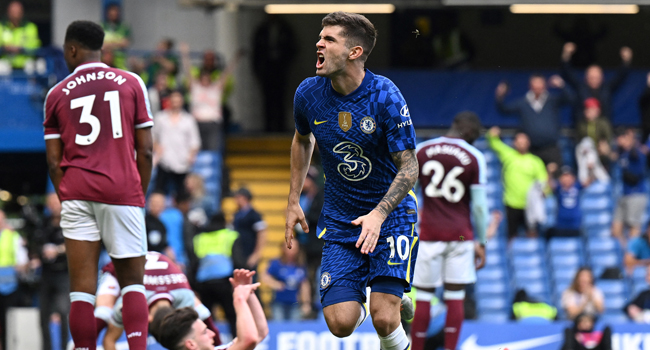 Christian Pulisic settled Chelsea’s top four nerves as his late goal sealed a dramatic 1-0 win against West Ham, while Burnley climbed out of the Premier League relegation zone with a 1-0 victory against Wolves on Sunday.

With Liverpool looking to close the gap on leaders Manchester City to one point with a win against Merseyside rivals Everton later on Sunday, the focus in the early games was on the top four race and the relegation battle.

At Stamford Bridge, Thomas Tuchel’s side looked set to endure more angst on home turf when Jorginho’s penalty was saved by Lukasz Fabianski in the final minutes.

But Pulisic came off the bench to inspire third-placed Chelsea, lifting them seven points clear of fifth-placed Tottenham in the fight to qualify for next season’s Champions League via a top-four finish.

A 4-2 defeat against Arsenal on Wednesday condemned Chelsea to three successive losses at the Bridge for the first time since 1993.

Tuchel admitted he had “no solution” for the “fragile” Chelsea defending that saw them concede 11 goals in their last three home games.

Concerned about Chelsea’s ability to hold onto their top-four berth, Tuchel made three changes from the Arsenal game as Thiago Silva replaced Malang Sarr in that creaky defence.

West Ham boss David Moyes left Declan Rice, Jarrod Bowen, and Michail Antonio on the bench as he prioritised the club’s first European semi-final since 1976, against Eintracht Frankfurt in the Europa League on Thursday.

Referencing the swathes of empty seats around the Bridge due to ticket restrictions imposed as part of the sanctions on Chelsea owner Roman Abramovich, West Ham fans chanted “just like the old days, there’s nobody here”.

Look what it meant! 😎 pic.twitter.com/AeKWVoqsZW

Following a tepid first half, Chelsea were more dynamic after the break.

Timo Werner twice went close as he fired into the side-netting, then stretched to poke his shot straight at Fabianski.

In the 87th minute, Silva flicked a header towards Romelu Lukaku, prompting Craig Dawson to concede a penalty with a pull on the substitute.

Dawson was initially booked before being sent off after a VAR check, but West Ham avoided further punishment as Jorginho’s weak spot-kick was easily saved by Fabianski.

But Pulisic sparred Jorginho’s blushes in the 90th minute as the United States forward met Marcos Alonso’s cross with a clinical low finish from 10 yards.

Burnley boosted their bid for a remarkable escape act as they moved into 17th place thanks to Matej Vydra’s second-half strike.

Since Sean Dyche’s surprise sacking after 10 years in charge, Burnley’s caretaker boss Mike Jackson has taken seven points from three games to revive their hopes of beating the drop.

Vydra had a second-half goal disallowed for offside, but he didn’t have to wait long to celebrate as he netted in the 62nd minute with a composed close-range finish from Wout Weghorst’s cross.

Burnley moved two points above third-bottom Everton, who have two games in hand as they look to avoid playing outside the top tier since 1954

James Ward-Prowse scored twice as Southampton came from two goals down to draw 2-2 at Brighton.

Danny Welbeck put Brighton ahead with a close-range finish after just two minutes and Mohammed Salisu turned Leandro Trossard’s cross into his own net for a 44th-minute own goal.

Ward-Prowse reduced the deficit on the stroke of half-time with his 14th successful Premier League free-kick, just four behind David Beckham’s record of 18.

He struck again nine minutes later, this time producing a clinical finish from the edge of the area. 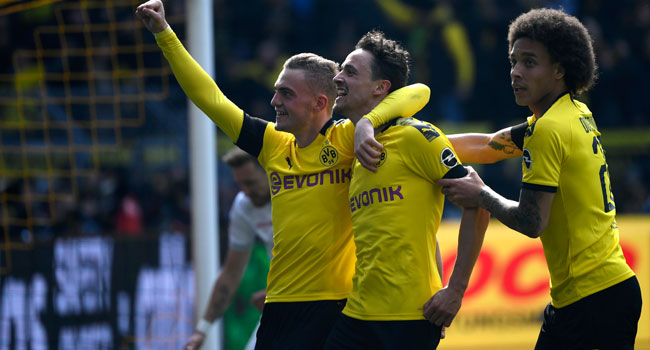 Bayern Munich missed the chance to wrap up a seventh successive Bundesliga title as they were held to a goalless draw at RB Leipzig on Saturday and rivals Borussia Dortmund edged a nervy 3-2 win over Fortuna Duesseldorf.

Chelsea-bound US international Christian Pulisic found the net in his final home game for Dortmund, helping them to battle back to within two points of league leaders Bayern ahead of the final round of games next weekend.

Bayern can now secure the title with a win at home to Eintracht Frankfurt next Saturday, while Dortmund must win at Borussia Moenchengladbach.

Dortmund, who looked dead and buried after slipping four points behind last week, enjoyed the rub of the green as they stumbled to victory over Duesseldorf.

Pulisic, who will join Chelsea next season, bid an emotional farewell to the Dortmund fans before the game and then opened the scoring on 41 minutes.

A howler from stand-in goalkeeper Marwin Hitz allowed Oliver Fink to equalize, but Thomas Delaney restored the lead for Dortmund.

Hitz then gave away a penalty with a foul on Dodi Lukebakio, but the Belgian dragged the ball wide from 12 yards.

Mario Goetze appeared to seal the win for Dortmund on 90 minutes, but Dawid Kownacki pulled one back for Duesseldorf minutes later to make it a nerve-jangling finish for the hosts.

In Leipzig, Leon Goretzka’s stylish scissor-kick sent Bayern into ecstasy after half-time, but the goal was ruled out by VAR.

Serge Gnabry hit the bar later in the second half, but Bayern could not force the winner.

At the other end of the table, Nuremberg and Hanover were finally relegated as Stuttgart secured the relegation play-off place with a 3-0 win over Wolfsburg.

Yet Anastasios Donis, Gonzalo Castro and Daniel Didavi were on the mark for Stuttgart to condemn Hanover and Nuremberg to the drop.

Nuremberg, meanwhile, suffered a 4-0 defeat to Borussia Moenchengladbach thanks to an own goal from Lukas Muehl and strikes from Thorgan Hazard, Denis Zakaria and former Nuremberg man Josip Drmic.

The thumping win sees Gladbach go fourth overnight, leapfrogging both Eintracht Frankfurt and Bayer Leverkusen, who were held to a 1-1 draw at home to Schalke, Guido Burgstaller cancelling out Kai Havertz’s opener.

Frankfurt have the chance to break back into the top four with a win over Mainz on Sunday.

Werder Bremen also kept their European hopes alive with a 1-0 win over Hoffenheim, and Hertha Berlin snatched a late 4-3 victory away to Augsburg.

Andre Hahn and Michael Gregoritsch put Augsburg ahead three times but goals from Marvin Plattenhardt and Marko Grujic kept Hertha in the game before a late brace from Salomon Kalou secured three points. 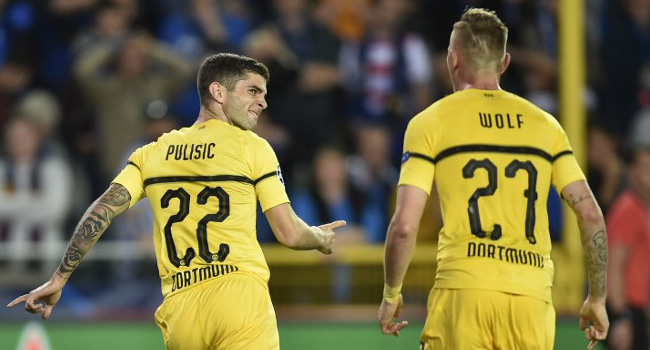 Christian Pulisic celebrated his 20th birthday in style on Tuesday with a lucky late goal as Borussia Dortmund won 1-0 at Club Brugge in the Champions League.

The United States international claimed the winner in fortuitous fashion by charging down a clearance from Brugge defender Matej Mitrovic which looped over the goalkeeper on 85 minutes.

It was a huge slice of good fortune but one that ended Dortmund’s 10-match winless streak in the Champions League.

“In the end, we won, but there is definitely room for improvement,” admitted Dortmund captain Marco Reus.

“We have to keep working hard to play better.

“Currently, we are not playing the kind of football we want to, but we are winning and we’ll take that.”

While Pulisic spared Dortmund’s blushes in Belgium on his 100th appearance for the club, it was a bad night for Mario Goetze.

The struggling Germany international made a rare start after being an unused substitute in the first three Bundesliga this season, but endured a frustrating hour in an attacking midfield role.

Goetze is a pale shadow of the player who hit the winner in the 2014 World Cup final and was hauled off midway through the second half after making little impact.

Having been left out of Germany’s World Cup squad for Russia, the 26-year-old is a long way from the player who helped Dortmund win back-to-back Bundesliga titles in 2011 and 2012.

However, Dortmund were delighted to win away after failing to win any of their six group stage games last season.

This was their first win in Europe since reaching the quarter-finals in 2016/17, but they will need to improve at home to Monaco in their second Group A game in a fortnight.

Thanks mainly to their goalkeeper Roman Burki, Dortmund were lucky to go into the break with the score goalless as Brugge, last season’s Belgian league champions, wasted clear chances.

Dortmund skipper Reus came to the rescue by deflecting a shot by Brugge striker Jelle Vossen after 20 minutes.

Dortmund were more aggressive after the break as head coach Lucien Favre brought on Shinji Kagawa with an hour gone, finally losing patience with Goetze.

Pulisic, who came on for England youth international Jadon Sancho, eventually broke the deadlock after he was thrown on for the final 20 minutes.

The all-action American gave away a free-kick before popping up with the winner to get Dortmund off to a victorious start in Europe.