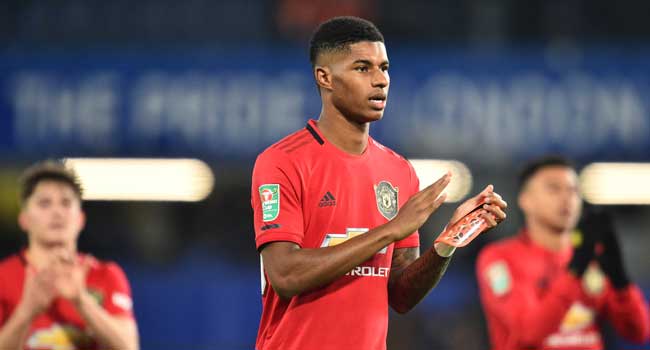 Manchester United forward Marcus Rashford has pleaded with the British government to continue to supply free meals for children in poorer families during the summer holidays in a letter “written from the heart”.

Children eligible for free school meals have received food during the coronavirus lockdown, often in the form of vouchers to spend at supermarkets.

About 1.3 million disadvantaged pupils are entitled to free school meals but the scheme in England will not run during the school holiday period, which starts in July.

England international Rashford, who has helped raise around £20 million ($25 million) for FareShare, a charity that fights hunger and food waste, received free meals as a child.

“The government has taken a ‘whatever it takes’ approach to the economy — I’m asking you today to extend that same thinking to protecting all vulnerable children across England,” he wrote in an open letter to lawmakers.

“I encourage you to hear their pleas and find your humanity. Please reconsider your decision to cancel the food voucher scheme over the summer holiday period and guarantee the extension.”

Rashford, 22, added: “As a black man from a low-income family in Wythenshawe, Manchester, I could have been just another statistic.

“Instead, due to the selfless actions of my mum, my family, my neighbours, and my coaches, the only stats I’m associated with are goals, appearances and caps.”

Rashford, last week named the fifth most valuable player in Europe, told the BBC the letter was “written from the heart”.

“What families are going through now, I’ve once had to go through that — and it’s very difficult to find a way out. It’s very important for me to help people who are struggling,” he said.

A spokesman for British Prime Minister Boris Johnson said Johnson would respond to the letter.

“He (Rashford) has been using his profile in a positive way to highlight some very important issues,” the spokesman said.

“The prime minister understands the issues facing families across the UK, which is why last week the government announced an additional £63 million for local authorities to benefit all families who are struggling to afford food and other basic essentials.”