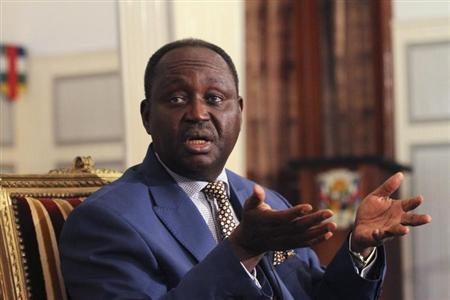 Rebels in Central African Republic seized control of the riverside capital Bangui after fierce fighting on Sunday, forcing President Francois Bozize to flee and raising fears of instability in the mineral-rich heart of Africa.

At least nine South African soldiers were killed trying to prevent the rebels taking Bangui, a Reuters witness said, dealing a blow to Pretoria’s attempt to stabilize the chaotic Central African nation and assert its influence in the region.

The Seleka rebel coalition resumed hostilities this week in the former French colony and quickly swept south towards Bangui with the aim of toppling Bozize, whom it accused of breaking a January peace deal to integrate its fighters into the army.

“We have taken the presidential palace,” Eric Massi, a Seleka spokesman, told Reuters by telephone from Paris.

Senior government officials confirmed the rebels had captured the city of more than 600,000 people, which lies on the banks of the Oubangi river bordering Democratic Republic of Congo. Residents reported widespread looting of homes and businesses.

“The looting is bad. Both the population and Seleka are involved,” said one senior U.N. official in Bangui. “We are not sure who is in charge. I don’t think it is clear yet. It is too early in the game.”

The violence is the latest in a series of rebel incursions, clashes and coups that have plagued the landlocked nation – which has rich deposits of gold, diamonds and uranium – since its independence from France in 1960.

The whereabouts of Bozize – who seized power in a 2003 coup backed by neighboring Chad – was uncertain. A presidential advisor said he had crossed the river into Congo on Sunday morning as rebel forces headed for the presidential palace.

French Foreign Minister Laurent Fabius confirmed Bozize had fled Bangui, but gave no details of his whereabouts. He appealed to France’s 1,200 citizens in the country to remain calm and stay in their homes.

Congo’s government asked the U.N. refugee agency to help move 25 members of Bozize’s family out of the border town of Zongo. Information Minister Lambert Mende said the ousted president was not among them: “Bozize is not in Democratic Republic of Congo.”

CAR has extensive and unprotected borders and the rebel takeover may add to instability in the turbulent region. It was one of several countries where U.S. special forces were helping local soldiers hunt down the Lord’s Resistance Army, a rebel group that has rampaged across Central Africa killing thousands.

As the loose coalition of rebels – some of them former rivals – tightened their grip on Bangui, it was unclear who would replace Bozize or whether the power-sharing government of Prime Minister Nicolas Tiangaye would remain in place.

The rebels received several key ministerial portfolios in the government under January’s peace deal but accused Bozize of unfairly keeping important posts for his loyalists.

Nelson Ndjadder, a spokesman representing Seleka’s CPSK faction, said the rebels would begin a transition process towards elections which would include all political groups.

“This situation must not lead to any vengeance, pillaging or score-settling which we would quickly condemn and bring those responsible to justice,” Ndjadder said in a statement.

A Reuters witness, however, saw youths looting houses -including the residence of Bozize’s son, Francis – in the northern part of the city.

Rebel fighters directed looters towards the houses of army officers but fired their rifles in the air to protect the homes of ordinary citizens, the witness said.

Seleka’s forces had fought their way to the northern suburbs of the riverside capital late on Saturday before an overnight lull in the fighting. Residents said heavy weapons fire erupted across Bangui around 8 a.m. (3.00 a.m. ET).

Seleka’s Massi said the rebels had broken through a line of South African soldiers during their push into the city. Around 400 South African troops were deployed in the country as military trainers.

“I saw the bodies of six South African soldiers. They had all been shot,” a Reuters witness said. Later, he saw three more bodies in burned-out South African military vehicles.

Regional peacekeeping sources said the South Africans had fought alongside the Central African Republic’s army on Saturday to prevent rebels entering the capital.

A source with the United Nations in Bangui said South African troops were preparing to leave the country.

“They took substantial losses and have asked for French support to load their troops and take off,” said the source.

Several peacekeepers from the Central African regional force, including three Chadians, were also killed on Saturday, when a helicopter operated by Bozize’s forces attacked them, Chad’s presidency said in a statement.

Bozize seized power in 2003 with Chad’s support and Chadian forces have since intervened on several occasions to fend off attempts to depose him.
France, which already had 250 soldiers in Central African Republic, has sent in another company of 150 troops to secure Bangui’s international airport, a diplomat said on Saturday. Paris said on Sunday it had no plans to deploy more troops.

Seleka fought its way to the gates of the capital late last year after accusing Bozize of violating an earlier peace deal to give its fighters cash and jobs in exchange for laying down their arms.