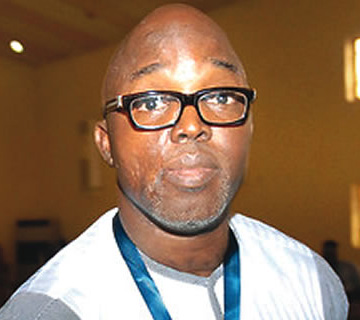 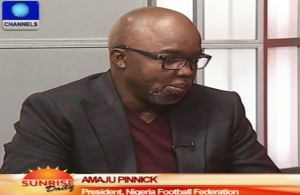 The President of the Nigerian Football Federation, NFF, Mr Amaju Pinnick says his election was divinely scripted and he would therefore depend on the Almighty for the task of fixing the game.

Speaking on Channels Television’s Sunrise Daily on Tuesday, Pinnick noted that identifying the problems in the Federation and creating an environment of peace and stability would be the first task to embark on.

He stated that he was aware of how bad things were in the organisation before venturing into leading it and therefore did not expect to have things easy but he was ready for the challenge.

“I came at a time when there is so much turbulence, bickering, animosity, hatred in the system. So its not going to be something very rosy or easy, but prayerfully, tactfully we are going to do what we want to do.”

He revealed that one of the major sources of problems in the NFF, asides the deep seated emotional bitterness, is the politics of exclusion.

He, however, expressed joy that some top people have started extending hands of fellowship to him including those who ran against him in the race to the NFF Presidency, like Amanze Uchegbulam.

“Repairing Nigerian Football is a major task,” he said.

Pinnick also emphasized the need to create an environment for potential partners to wish to identify with the Federation, noting that it would be important for the NFF to build trust especially among corporate organisations.

“We are going to create a platform for them to see that we are very serious.”

Pinnick itemised a number of steps his team would take in order to build the confidence in corporate organisations, “where people know that their brand name will not be tainted”.

Sustainable football culture is Pinnick’s priority and he warned that this would mean Nigerians have to make sacrifices as regards their constant quest for winning trophies, as there must be long, medium and long term goals.

He explained the plan to create a technical study group under the NFF technical department, which would go round the country to select genuinely young and talented players quarterly for transfer to developmental leagues abroad.

He explained that this would not be for them to be put under the pressure of winning at all cost for the Golden Eaglets or Flying Eagles but they would be trained to have the mentality of seeing themselves as future Super Eagles.

Pinnick linked the successes recorded by Germany in recent years to a similar approach with he said also gives him the assurance that “Germany is going to dominate for the next eight years.”

Pinnick also noted that his strategy was based on a similar template which he has worked and succeeded with, citing the Blessing Okagbare success as an example of how to build sustainable development which he assured would eventually yield results.

He also played up his experiences working at the world football governing body, FIFA, and the progression from that and rising gradually to the top of football administration in Delta State as quality antecedents that give him the confidence that same successes can be achieved with the NFF.

On the employment status of Super Eagles Coach, Stephen Keshi, Pinnick noted that the Eagles Coach remains a hero who must be accorded the respect of one, having won the African Cup of Nations as a player and as a coach. 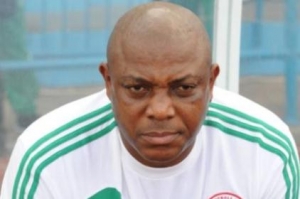 He noted that although he had made comments in the past that “Keshi has reached his limit and he needs to build his capacity” the recommendation of the technical arm of the NFF would be considered.

“I believe in due diligence, going through a due process. The technical department will come up with a comprehensive report about Keshi, submit it to the technical committee, they look at it and give it to the board.

“The board will now make a decision based on those reports, but I can assure you we are not going to do anything that is against the interest of Nigerians.”

Pinnick would not give a categorical statement on the future of Keshi with the Super Eagles, but hinted that “if Keshi is going to stay we will help him” explaining how he intends to do this.

He also noted that the priority of the board would not just be Keshi but also the training of other Nigerian coaches and referees, as improving the level of officiating in Nigeria, and having a Nigerian referee feature at the next World Cup is one of his targets.

He appealed to Nigerians to be patient, promising, “We are going to give you what you’ve never seen before.”