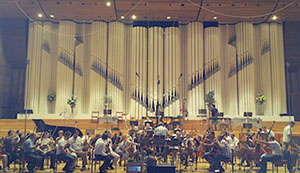 The 25 original classical tunes were recorded with the Bratislava Symphony Orchestra and some are already available on some Nokia Lumia models.

Nokia said they decided to hire the orchestra after a study revealed that classical music ringtones were the second most popular.

According to the Telegraph, the pieces were composed by the mobile phone giant’s in-house ‘sound designers’ before being recorded with the 55 members of the orchestra.

It can be said authentically now that Sony’s Xperia T mobile phone has gotten more prominence as it was mentioned as the ‘James Bond phone’. Although it does not come up as something suave and stylish, possibly throwing in some devilish weapon or a nifty tool to open impenetrable doors too but it comes with its own exclusive content via the O2 network.

Sadly it doesn’t come with a special handset design. Would it have been that difficult to stick a Bond logo on the back? Obviously it was which a shame is.

Instead, you’ll get a handset that is preloaded with Skyfall content, including the 007 ringtone, themes and screensavers, plus Skyfall images geo-tagged to the film’s locations. It also has exclusive James Bond packaging, which is nice, but it’s not something you can show off when you are out and about. As a final sweetener, a copy of the 007 Legends game is thrown in for free.

The phone itself remains unchanged technically, which means a set of features headed up by a 4.6-inch screen powered by the Mobile BRAVIA engine, a 13-megapixel camera with ‘Sleep-to-snap’ feature to take a photo quickly plus 1080p video recording, along with NFC connectivity and a 1.5GHz dual-core processor.

O2 has the phone down for a September launch, which ties in with what we heard about a launch right at the end of the month. Contact O2 for details of its pricing, which is unlikely to differ much from the standard version.