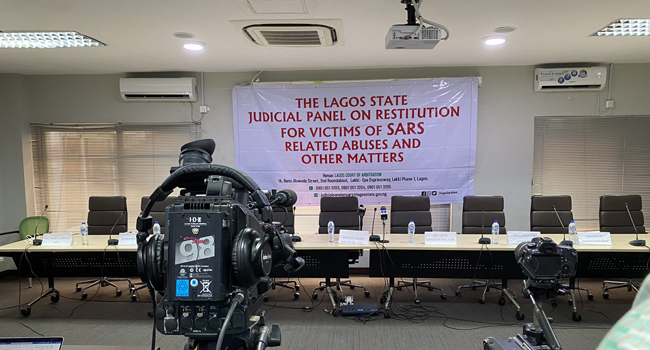 After failing to sit on Saturday, the Lagos State Judicial Panel on Restitution for victims of SARS and other related matters commenced its sitting today without two of its members.

Senior Advocate of Nigeria, Ebunolu Adegboruwa, who was absent had already hinted last weekend that he was considering his continued participation at the panel.

A youth representative on the panel, Rinuola Oduala, had also tweeted her decision to stop further participation in the panel.

With the absence of the two, seven other members of the panel sat to listen to 10 petitions listed for hearing.

While granting a further adjournment for the adoption of final addresses in the first petition of Francis Idum VS FSARS, the Chairman of the panel, Justice Doris Okuwobi warned lawyers to file their documents timeously. She said the panel had very little time left for its assignment and could not afford to be too liberal or magnanimous in granting adjournments when counsel fail to do what is expected of them.

In the second petition, involving late Rasheed Kareem, two witnesses testified on behalf of the family, the brother of the deceased, Olalekan Bankole whose testimony was closely followed by that of Imam Taofeek, who described himself as the best friend of the deceased.

The panel watched a video tendered in evidence by the petitioners of how the late Rasheed was allegedly shot by policemen said to be from the Area C police station in Surulere on October 3, 2020. 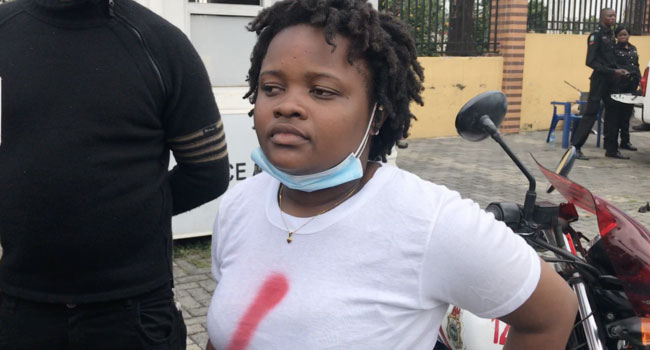 #ENDSARS Activist Bolatito Oduala commonly known as Rinu has spoken concerning the agitations of the protesters noting that the people have lost faith in the Nigerian government.

Rinu, who spoke with Channels Television during the breakfast programme, Sunrise Daily, is one of the frontline fighters to an end police brutality, extortion, and harassment by the officials of the Special Anti-Robbery Squad (SARS).

Despite the recent announcement by the Inspector-General of Police (IGP) pronouncing that SARS has been disbanded, protesters are still on major streets across the country.

While explaining the reason for the continuous protest, Rinu said, “the people do not believe in the Government and have lost faith in the policies of leadership to put an end to SARS officials.”

She added that the protesters do not take the recent announcement by the IGP seriously because such an announcement has been made in the past and the SARS operatives are still on the streets.

“SARS has been disbanded four times in the past five years,” she said, stressing that this is a strong reason the people have little or no trust in the Government policies.

Rinu believes that the only way Government can mitigate the actions of the youth and protesters is to call for an actionable and immediate implementation of ending the SARS unit of the Nigerian Police Force (NPF).

“Disarm these officials and ensure that guilty personnel gets punished in accordance with the law,” she said.

She also advised that the government should focus on implementing sustainable policies to protect citizens as the only way to regain public trust.

Listing some of the demands of the agitators, Rinu said the protesters are calling for an immediate investigation into the complaints and punishment of the erring officers.

The protesters also demand compensation for affected families and individuals who have been victims of SARS and police brutality and a complete reform of the Nigeria Police.

“The public space should be enlightened about the government’s steps and techniques to achieve the total end and eradication of the Special Anti-Robbery Squad and their unethical activities,” she added.

She said the government should listen to the protesters who have and are listing their demands and take cognizance of these demands and take the necessary steps to put an end to police brutality.