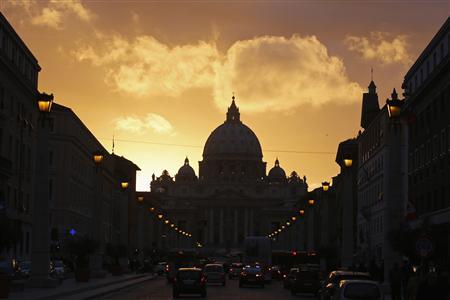 Roman Catholic cardinals gather under the gaze of Michelangelo’s “Last Judgment” on Tuesday to elect a new pope to tackle the daunting problems facing the 1.2-billion-member Church.

The secret conclave, steeped in ritual and prayer, could carry on for several days, with no clear favorite in sight to take over the reins from Pope Benedict, who abdicated last month saying he was not strong enough to confront the Church’s woes.

In a process dating back to medieval times, 115 “Princes of the Church” from 48 countries will shut themselves in the Vatican’s frescoed Sistine Chapel on Tuesday afternoon after a public Mass in St. Peter’s Basilica in the morning.

They will emerge from their seclusion only when they have chosen the 266th pontiff in the 2,000-year-history of the Church, which is beset by sex abuse scandals, bureaucratic infighting, financial difficulties and the rise of secularism.

“We are ready to enter the conclave and it will be longer than the last one,” South African Cardinal Wilfrid Fox Napier told reporters on Monday, referring to the 2005 election of Benedict, that was wrapped up in 24 hours after four ballots.

“It will last a few days. Maybe four or five,” he predicted.

The average length of the last nine conclaves was just over three days and none went on for more than five days.

Vatican-insiders say Italy’s Angelo Scola and Brazil’s Odilo Scherer have emerged as the men to beat. The former would bring the papacy back to Italy for the first time in 35 years, while the latter would be the first non-European pope in 1,300 years.

However, a host of other candidates from numerous nations also have been mentioned, including U.S. cardinals Timothy Dolan and Sean O’Malley, Canada’s Marc Ouellet and Argentina’s Leonardo Sandri.

All the red-hatted prelates closed in the Sistine Chapel were appointed by either Benedict or his revered predecessor John Paul, and the next pontiff will almost certainly pursue their fierce defense of traditional moral teachings.

But Benedict and John Paul were criticized for failing to reform the Vatican bureaucracy, battered by allegations of intrigue and incompetence, and some churchmen believe the next pope must be a manager or put a good management team in place.

Vatican insiders say Scola, who has managed two big Italian dioceses, might be best placed to understand the Byzantine politics of the Vatican administration – of which he is not a part – and therefore be able to introduce swift reform.

The Curia faction is said by the same insiders to back Scherer who worked in the Vatican’s Congregation for Bishops for seven years before later leading Brazil’s Sao Paolo diocese – the largest diocese in the biggest Catholic country.

With only 24 percent of Catholics living in Europe, pressure is growing within the Church to see a pontiff from elsewhere in the world who would bring a different perspective.

Latin American cardinals might worry more about poverty and the rise of evangelical churches than questions of materialism and sexual abuse that predominate in the West, while the growth of Islam is a major concern for the church in Africa and Asia.

The cardinals are expected to hold their first vote late on Tuesday afternoon – almost certain to be inconclusive – before retiring to the Vatican hotel for the night.

They hold four ballots a day thereafter until one man has won a two-thirds majority – or 77 votes. Black smoke from a makeshift chimney on the roof of the Sistine Chapel will show no-one was elected while white smoke and the pealing of St. Peter’s bells will announce the arrival of a new pontiff.

As in medieval times, the cardinals will be banned from communicating with the outside world. The Vatican has also taken high-tech measures to ensure secrecy in the 21st century, including jamming devices to prevent eavesdropping.