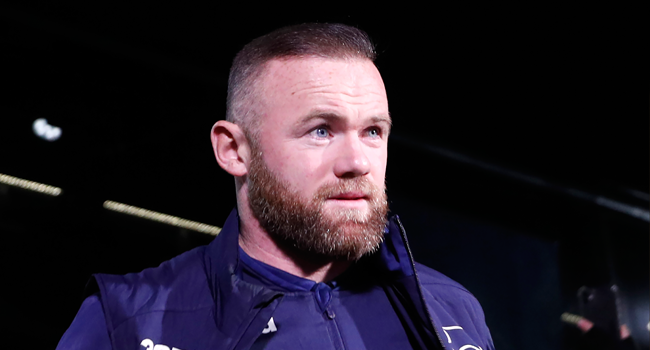 Jamie Lindsay fired home four minutes from time as the Millers’ moved above Derby, who slip to second bottom of the table.

It was far from an ideal start to his reign for the former Manchester United and England captain, who gave an honest assessment of side’s underwhelming performance.

“Our quality on the ball and our concentration levels weren’t where they should be.

“That’s the disappointing thing and, if I’m being honest, I don’t think we deserved anything from this game.”

At the other end of the table, Norwich remain well on course for an immediate return to the Premier League thanks to a fast start in a 2-1 win at Cardiff.

Grant Hanley put the leaders in front after just four minutes, nodding in at the far post after a flick-on from a corner.

And it was 2-0 after 20 minutes as Todd Cantwell rounded off a slick counter-attack by slotting into an empty net following a smart save from Alex Smithies.

Joe Ralls gave Cardiff hope by thumping into the bottom corner from 12 yards after 65 minutes but the hosts were reduced to 10 men five minutes later when Marlon Pack was shown a second yellow card and slipped to a fourth successive defeat.

Ben Cabango opened the scoring just before half-time before Jamal Lowe doubled the Swans advantage with his 10th goal of the season.

Bournemouth are now four points off the automatic promotion places after a 1-0 loss at home to Luton.

The Cherries’ task was made more difficult when Jefferson Lerma was shown a straight red card after 26 minutes for catching Tom Lockyer in the face with a stray arm while competing for a header.

Bournemouth pushed to overcome their numerical disadvantage but Luton capitalised as the hosts tired when Kiernan Dewsbury-Hall curled the winner into the bottom corner 23 minutes from time.

Watford returned to the playoff places with a 2-0 win over Huddersfield.

Alex Vallejo attempted to pass the ball back to Ryan Schofield, who hesitated as Cleverley closed in and beat the goalkeeper to the ball to slide in from six yards.

Joao Pedro made sure of the points 10 minutes later, tapping in at the far post from Kiko Femenia’s cross.

Sammy Ameobi struck twice as Nottingham Forest secured back-to-back wins for only the second time this season with a 3-1 victory against Millwall.

Birmingham manager Aitor Karanka enjoyed a successful return to the Riverside as Scott Hogan struck to earn the Blues a 1-0 win and prevent Middlesbrough from moving into the play-off places.

A 1-1 draw did little to aid Stoke and Blackburn’s playoff hopes. 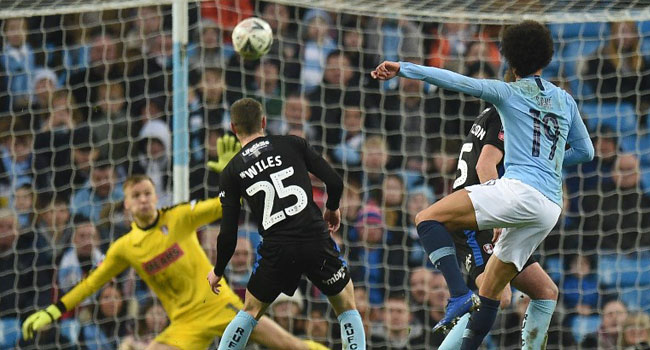 Premier League champions Manchester City began their FA Cup campaign with a 7-0 thrashing of Rotherham on Sunday but Fulham, battling to avoid relegation from the Premier League, were beaten 2-1 by fourth-tier Oldham.

Barnet ensured there would be a non-league presence in the fourth round with a 1-0 win away to second-tier Championship club Sheffield United.

Manchester City manager Pep Guardiola may have made eight changes from the team that beat Premier League leaders Liverpool on Thursday but still fielded a strong side for the visit of Championship club Rotherham, with Raheem Sterling, Riyad Mahrez and Gabriel Jesus all starting as playmaker Kevin De Bruyne returned from injury.

De Bruyne played in Sterling for a 12th-minute opener and City then scored twice in the closing stages of the first half.

Phil Foden, the England Under-21 international, got on the end of a cross from Ilkay Gundogan in the 43rd minute before Rotherham defender Semi Ajayi turned the ball into his own net.

Jesus made it 4-0 early in the second half before Mahrez, Nicolas Otamendi and Leroy Sane added further goals.

Denis Odoi put Fulham ahead in the 52nd minute at Craven Cottage but Sam Sturridge drew Oldham level with a penalty before Callum Lang’s header two minutes from time sealed a comeback win.

Watford manager Javi Gracia changed his entire starting side from the team that drew 3-3 at Bournemouth, with Venezuela forward Adalberto Penaranda making his Hornets debut against non-league Woking.

But hopes of Woking, 110 places adrift of the Hornets, enjoying a shock win suffered a setback when Will Hughes curled in a 13th-minute shot from the edge of the area.

Watford made it 2-0 16 minutes from time when Troy Deeney scored from close range.

On Saturday, FA Cup holders Chelsea cruised to a 2-0 win over Nottingham Forest in what seems certain to have been Cesc Fabregas’s final match for the Blues.

It was the same scoreline as Manchester United beat Reading to make it five wins out of five under caretaker boss Ole Gunnar Solskjaer.

Newcastle were also held to a draw, 1-1 against second-tier Blackburn.

Premier League leaders Liverpool will complete a third round that started with Tottenham’s 7-0 thrashing of Tranmere on Friday when they travel to top-flight rivals Wolves on Monday.