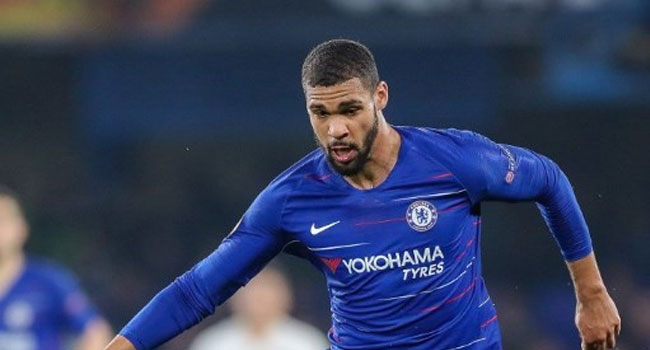 The 23-year-old made a strong impression during his first season as a regular in the Chelsea team last term and new Blues boss Frank Lampard is expected to make him a key part of his plans.

Loftus-Cheek missed out on the Blues’ Europa League final victory over Arsenal after suffering a ruptured Achilles tendon during a friendly in the United States.

“I’m really happy and pleased that I get to stay here for another five years,” Loftus-Cheek told Chelsea’s website.

“It’s the place where I’ve grown up playing and hopefully I’ll be playing here for a lot longer.”

Loftus-Cheek joined Chelsea as an under-eight and progressed through the youth ranks to the first team, so far making 72 appearances.

A loan spell at Crystal Palace gave the midfielder valuable top-level experience and coincided with his first full England call-up against Germany in November 2017.

With Chelsea currently operating under a transfer ban for the next two windows, keeping promising players like Loftus-Cheek is essential to their hopes of competing for a top-four finish in the Premier League.

“When I look back and see how the hard work has paid off, it’s a good feeling. That only makes me want to work harder to achieve more in the future,” Loftus-Cheek added.

“I hope to win a lot more trophies with the team and personally it’s just about trying to do as well as I can and work hard to be a key player for Chelsea.”

Chelsea director Marina Granovskaia added: “We see Ruben as an important part of the squad for many years to come and we are very pleased he also considers his future to be with Chelsea.” 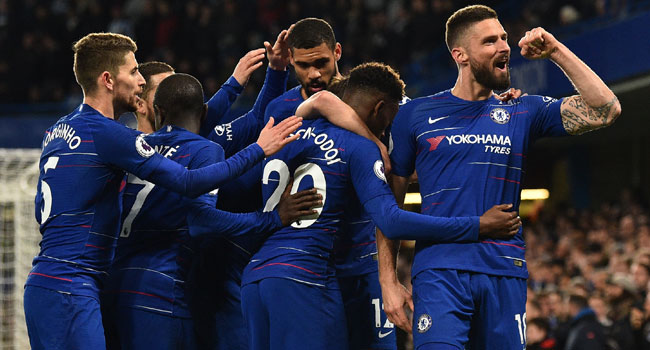 Chelsea eased the pressure on under-fire boss Maurizio Sarri as Callum Hudson-Odoi’s influential display and sublime strikes from Eden Hazard and Ruben Loftus-Cheek sealed a 3-0 win over Brighton on Wednesday.

Sarri couldn’t afford a negative result against struggling Brighton at Stamford Bridge after being subjected to fresh calls for his sacking during Sunday’s unconvincing win at Cardiff.

The angry Chelsea fans that showed their displeasure at the weekend were in part, motivated by Sarri’s refusal to select England winger Hudson-Odoi.

But Sarri finally unleashed Hudson-Odoi for his first Premier League start, while Loftus-Cheek also made the most of a rare appearance as the youngsters bolstered Chelsea’s bid for a top-four finish.

England midfielder Loftus-Cheek capped a morale-boosting victory for the troubled Blues when the 23-year-old netted a majestic third to kill off FA Cup semi-finalists Brighton.

Chelsea is up to fifth place, behind fourth-placed Arsenal on goal difference as the race to qualify for the Champions League approaches a dramatic denouement.

Achieving that target is essential for Sarri as he battles to avoid the sack in a turbulent first season in charge.

Criticised for leaving Hudson-Odoi as an unused substitute against Cardiff, Sarri, at last, bowed to public pressure.

Hudson-Odoi was one of seven changes, with Hazard and N’Golo Kante returning after being rested in south Wales.

The 18-year-old’s fine performances for England recently shone the spotlight on Sarri’s decision to use him so infrequently.

Hudson-Odoi had played mostly in Europa League, FA Cup and League Cup ties, with his Premier League appearances coming from the bench.

Infuriated by his bit-part role, Hudson-Odoi has considered leaving, with Bayern Munich making their interest public before having a bid rebuffed by Chelsea in the January transfer window.

Sarri would be a brave man to drop him again, but whether Chelsea can persuade him to stay remains to be seen.

Hudson-Odoi’s name was loudly cheered when the team was read out before kick-off and he almost made the perfect start when his burst into the Brighton area ended with Shane Duffy deflecting his shot narrowly over.

Adding a much-needed cutting edge to Chelsea’s attack, Hudson-Odoi unfurled a pin-point cross that was headed over by Cesar Azpilicueta.

Hudson-Odoi was a constant threat and he played a key role as Chelsea made the breakthrough in the 38th minute.

Hazard’s precise pass found Hudson-Odoi on the right flank and he effortlessly eased past Anthony Knockaert with a nimble piece of footwork before whipping over a low cross that Giroud cleverly flicked in from close range.

It was Giroud’s first Premier League goal since November and his 11th in all competitions, rewarding Sarri’s decision to pick him instead of the misfiring Gonzalo Higuain.

Hudson-Odoi was a far more potent presence than either Willian or Pedro has been on the flanks for Chelsea this season.

Rising to meet Jorginho’s cross in the second half, Hudson-Odoi showed impressive strength to get in front of his marker but could only head straight at Mat Ryan.

While Hudson-Odoi’s potential is undeniable, Hazard remains Chelsea’s main man, a point he stylishly underlined in the 60th minute.

Teed up by Loftus-Cheek on the edge of the Brighton area, Hazard fooled Lewis Dunk with a drop of the shoulder that left the Brighton defender sliding past him, giving the Belgian time to bend a fine finish into the far corner.

Inspired by that moment of magic, Loftus-Cheek produced a show-stopper of his own three minutes later when he curled a superb 25-yard strike into the roof of Ryan’s net for his second goal in successive games. 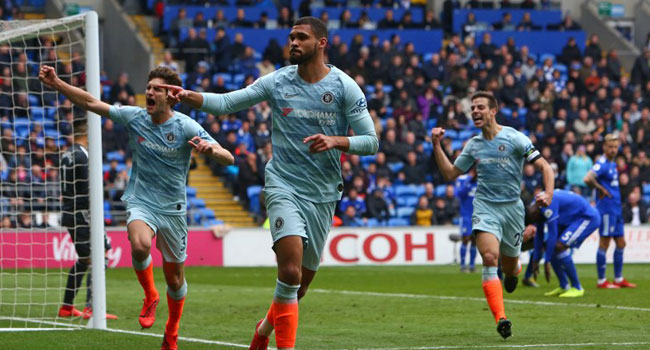 Maurizio Sarri rode his luck as Chelsea narrowly avoided humiliation at Cardiff to hit back and snatch a controversial 2-1 win on Sunday.

Blues boss Sarri was on the brink of a loss that would have pushed him closer to the sack after Victor Camarasa swept struggling Cardiff ahead early in the second half.

Chelsea’s traveling fans had made their feelings clear as they chanted “We want Sarri out” in the second half.

But Sarri’s luck was in as Cesar Azpilicueta headed Chelsea’s equaliser even though clearly offside with just six minutes left.

Chelsea’s fightback got another boost when Antonio Rudiger escaped a red card when he hauled down Kenneth Zohore.

The result keeps sixth-placed Chelsea in contention for a top-four finish in the Premier League, leaving them just one point behind fourth as Sarri battles to salvage a wretched first season in charge.

Cardiff remains the third bottom, with boss Neil Warnock visibly furious at the decisions that pushed his team closer to relegation.

The pressure on Sarri will reduce a little with this victory, but the performance was so unconvincing that it would be no surprise if Wednesday’s clash with Brighton is another close affair for the former Napoli boss.

Despite the clamour for Callum Hudson-Odoi to be given his first league start for Chelsea after his fine England performances, Sarri was unmoved.

The 18-year-old was named among the substitutes, with Eden Hazard – scorer of a hat-trick against Cardiff back in September – also surprisingly on the bench alongside N’Golo Kante.

Chelsea controlled the early stages but the nearest they came to a threat was a long-range shot by Pedro which dipped over the bar.

Cardiff’s response was to create their own first opportunity.

Harry Arter’s neat pass let Josh Murphy have a run at Marcos Alonso and when the winger cut inside; his shot curled the wrong side of the far post.

Chelsea was remarkably lacklustre in attack and Marcos Alonso’s tame side-foot effort summed up their drab efforts in the first 45 minutes, highlighting how blunt their attack can appear when Hazard is absent.

Within a minute of the re-start Camarasa gave the home side a shock lead.

A long throw-in by Aron Gunnarsson was only half-cleared by the Chelsea defence, giving the Icelander the time to find Arter.

The midfielder clipped a pass to the unmarked Camarasa who struck a crisp half-volley from 15 yards past a startled Kepa Arrizabalaga in the Chelsea goal.

Sarri’s response was to send on Hazard, just as Chelsea supporters started to chant for their manager to be sacked.

The Belgian was straight into the action as Chelsea looked for their talisman to turn things around.

An increasing desperate Sarri also sent on Loftus-Cheek and then Olivier Giroud.

But there was no introduction of Hudson-Odoi despite his impact for England.

Hazard was unable to impose himself and there was a chorus of “You don’t know what you’re doing” aimed at Sarri as the final whistle loomed.

But with six minutes left, Chelsea finally forced their dubious equaliser as Azpilicueta headed in from Alonso’s flick.

It was the defender’s first goal for almost a year, but it could prove so precious to both Chelsea and Sarri’s future.

That gave Chelsea the confidence to pour forward and Loftus Cheek produced a composed stoppage-time header from Willian’s cross just when Sarri needed it most. Nigeria internationals Kelechi Iheanacho and Alex Iwobi have been shortlisted for the 2016 edition of the Golden Boy Award.

Iheanacho who recently became the first Nigerian to score in the Manchester derby made the list having scored 10 goals in the 2015/2016 season and has three so far in the ongoing 2016/17 season.

Iwobi got into the Arsenal first team last season, scoring two goals and has become a regular for the Gunners this season.

The Golden Boy Award is meant for the best player under the age of 21 who play in a European nation’s top division.

The 18-year-old talent has enjoyed a stellar 2016 since making his Manchester United debut in February, including becoming an England international.

There are three representatives from Chelsea (Ruben Loftus-Cheek, Andreas Christensen and Nathan), while Manchester City have two (Kelechi Iheanacho and Leroy Sane). 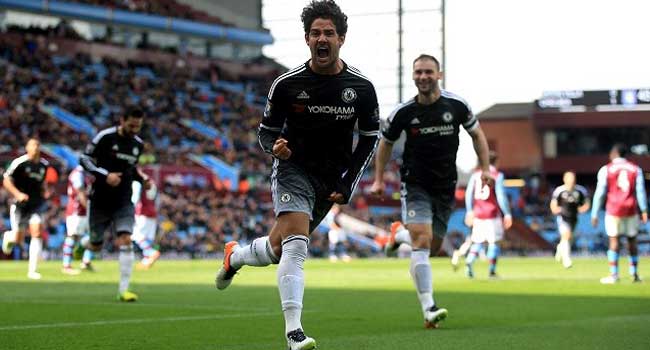 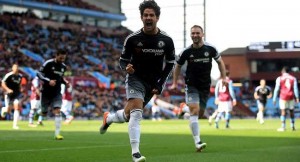 Alexandre Pato marked his Chelsea debut with a goal as the Barclays Premier League champions won 4-0 to leave Aston Villa on the brink of relegation.

The Brazilian soon converted a penalty he won himself and was also instrumental in the second half, combining with Oscar to create two goals for Pedro, as the Blues’ slender hopes of a top-six finish were given a boost.

The manager said after the game, “It was good to see him come in, of course the expectation was for him to come in earlier but we had to give him a pre-season. It wasn’t the toughest Premier League game but we are happy to see him play and we will see how he copes.

“The players see him suffering by training with the first team and then doing extra work so they are happy, they recognise his situation and it was a relief for him to get his first goal.”

Having parted company with manager Remi Garde on Tuesday, and then suspending Gabriel Agbonlahor amid an investigation into his conduct, interim Villa manager, Eric Black presided over a limp performance.

Alan Hutton’s late sending-off ended a dismal afternoon on another low note for Villa, who have suffered seven defeats in a row for a second time this season.

The Blues have now extended their unbeaten Premier League run to 15 games and the manager hopes they continue in that fashion.

“It would be nice to be unbeaten until the end of the season. When I bring young kids in there is a bigger risk of failure, but I prefer that.”