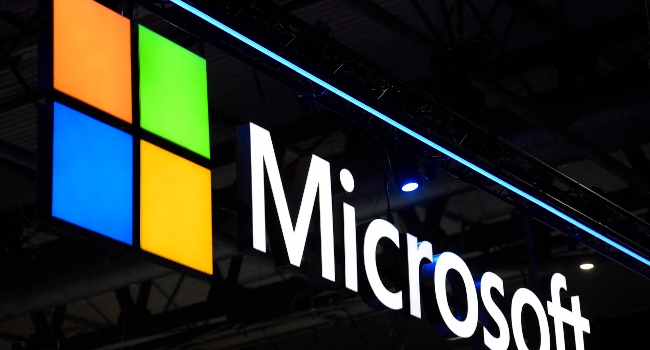 Microsoft is halting new sales of its products and services in Russia, the tech giant announced Friday, in the latest fallout over Moscow’s invasion of Ukraine.

“Like the rest of the world, we are horrified, angered and saddened by the images and news coming from the war in Ukraine and condemn this unjustified, unprovoked and unlawful invasion by Russia,” Microsoft president Brad Smith said in a blog 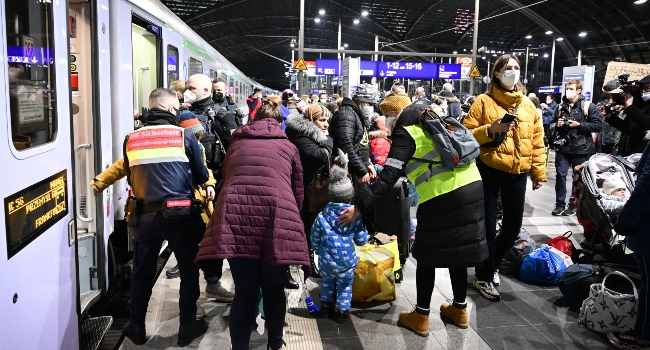 One million refugees have fled Ukraine in the week since Russia’s invasion, the United Nations said Thursday, warning that unless the conflict ended immediately, millions more were likely to flee.

“In just seven days we have witnessed the exodus of one million refugees from Ukraine to neighbouring countries,” UN refugee chief Filippo Grandi tweeted.

“Unless there is an immediate end to the conflict, millions more are likely to be forced to flee Ukraine,” Grandi warned.

Grandi said the numbers were rising with incredible speed.

“I have worked in refugee emergencies for almost 40 years, and rarely have I seen an exodus as rapid as this one,” he said.

“Hour by hour, minute by minute, more people are fleeing the terrifying reality of violence,” he said.

More than half of those who have fled Ukraine have crossed into neighbouring Poland. Hungary, Moldova, Hungary and Slovakia have also welcomed many refugees.

The UNHCR said more than 505,500 people have left Ukraine for Poland in the past week. Poland’s border guards put the figure at over 575,000 by early Thursday, with 95,000 having crossed on Wednesday alone.

Countless people have also been displaced inside Ukraine.

Grandi said UNHCR staff and other humanitarians were “working where and when they can in frightening conditions” inside Ukraine.

“Our staff stay, even at great risk, because we know the needs in the country are huge.”

The UN refugee chief also hailed the “remarkable” response of governments and local communities in surrounding countries that have received more than one million refugees.

“International solidarity has been heart-warming,” he said.

“But nothing – nothing – can replace the need for the guns to be silenced; for dialogue and diplomacy to succeed. Peace is the only way to halt this tragedy.” 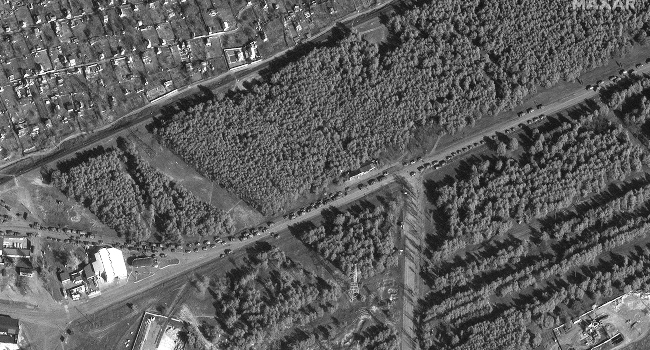 Russian troops have seized Kherson, the first major Ukrainian city to fall in a devastating week-old war that has already created one million refugees.

The capture of the Black Sea city of 290,000 people, which just last year hosted NATO-supported war games, appeared a significant boost for Moscow as it readied for potential ceasefire talks on Thursday.

After a three-day siege that left Kherson short of food and medicine, and struggling to collect and bury its dead, the town’s mayor also announced he was in talks with “armed guests.”

He had “made no promises” to the invading forces, but agreed to a night curfew and restrictions on car traffic.

“So far so good. The flag flying above us is Ukrainian. And for it to stay that way, these requirements must be met,” he said in a Facebook post.

Stalled elsewhere, Russia continues to make significant advances on the southern front, with troops breaking through in Kherson — opening the path west and north — and besieging the larger strategically vital port city of Mariupol.

There, mayor Vadym Boychenko reported hours of punishing bombardments that trapped civilians in a city now without light, water or heating as temperatures hover around freezing.

“Today was the hardest, cruellest of the seven days of this war,” he said. “Today they just wanted to destroy us all.”

Moscow’s victory in Kherson comes one week after Russian President Vladimir Putin’s army marched into Ukraine from the north, east and south, training a vast arsenal of weaponry at Ukrainian cities.

Russian forces have sporadically bombarded civilian targets across the country, including the capital Kyiv and the majority Russian-speaking second city of Kharkiv, which is now coming under more intense attack.

Ukrainian President Volodymyr Zelensky has called the barrage of missiles, shells and rockets a “war crime” and the International Criminal Court has confirmed an investigation is underway.

Amid violence that has kindled memories of Europe’s blood-soaked past, one million Ukrainians have now fled across the border into neighbouring Poland, Slovakia, Hungary, Romania and Moldova, according to the UN refugee agency’s rapidly rising tally.

“We left everything there as they came and ruined our lives,” refugee Svitlana Mostepanenko told AFP in Prague.

“They’re bombing even civilian houses where there are kids, small kids, children, they die now.” 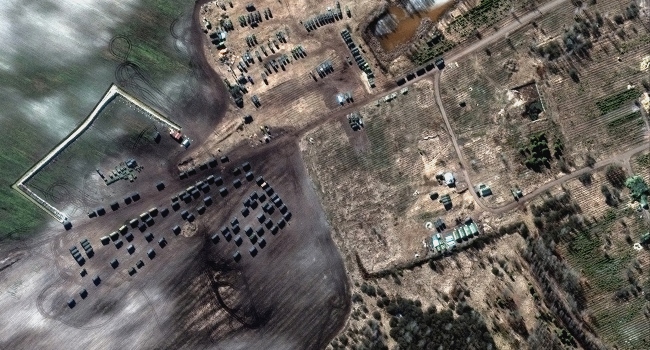 Russian forces struck cities in eastern Ukraine and massed armoured vehicles and artillery near the capital Kyiv on Tuesday, as Western powers promised further sanctions to bring down Russia’s economy.

An AFP reporter saw emergency services carrying a body out of the building, which was surrounded by rubble and whose windows were completely shattered.

“This is state terrorism on the part of Russia,” Ukrainian President Volodymyr Zelensky said in a video statement in which he called the defence of Kyiv “the key priority for the state”.

Ukrainian emergency services said at least 10 people were killed and more than 20 wounded, with 10 people discovered alive under the rubble as rescue workers cleared debris.

Armed clashes and bombings were also reported in various cities in southern Ukraine.

Mariupol on the Azov Sea was left without electricity, while Kherson on the Black Sea reported Russian checkpoints around the city.

Russian President Vladimir Putin has “shattered peace in Europe”, NATO chief Jens Stoltenberg said during a visit to an airbase in neighbouring Poland.

“Russia’s aim is clear — mass panic, civilian victims and the destruction of infrastructure. Ukraine is valiantly fighting back,” Mykhailo Podolyak, an adviser to Zelensky, said on Twitter.

More than 350 civilians have been killed since the Russian invasion began, including 14 children.

New Delhi said an Indian student was among the victims, killed by shelling in Kharkiv on Tuesday.

More than 660,000 people have already fled abroad, the UN refugee agency said, estimating that a million people are displaced within Ukraine.

Russia has defied international bans, boycotts and sanctions to press ahead with an offensive that it says is aimed at defending Ukraine’s Russian speakers and toppling the leadership.

Defence Minister Sergei Shoigu said Russia would continue “until set goals are achieved” after initial ceasefire talks between Moscow and Kyiv failed to secure a breakthrough.

He vowed to “demilitarise and de-Nazify” Ukraine and protect Russia from a “military threat created by Western countries”.

“We will bring about the collapse of the Russian economy,” French Finance Minister Bruno Le Maire told the Franceinfo broadcaster.

The British government said Western sanctions would remain “for as long as it takes” and warned Putin himself could face prosecution for war crimes.

‘Bombing kept us up all night’

As the conflict intensifies, fears are growing of a possible Russian assault to capture Kyiv — a city of 2.8 million in normal times.

The column is more than 65 kilometres long and covers the entire road from near Antonov airport outside Kyiv to the town of Prybirsk, US satellite imaging company Maxar said.

“Some vehicles are spaced fairly far apart while in other sections military equipment and units are travelling two or three vehicles abreast on the road,” Maxar said.

In the city, makeshift barricades dotted the streets and residents formed long queues outside the few shops with essentials that remained open.

“We will greet them with Molotov cocktails and bullets to the head,” bank employee Viktor Rudnichenko told AFP. “The only flowers they might get from us will be for their grave.”

In the village of Shaika near Kyiv, Natasha, 51, opened a canteen in the local church to feed soldiers and volunteers.

“The shelling and the bombing kept us up all night,” she said.

Of the hundreds of thousands of people who have fled abroad, neighbouring Poland alone has taken in nearly 400,000 people.

Iryna Plakhuta, a pregnant 43-year-old executive, had to leave her family behind in the capital because of fears over her safety.

“Our husbands stayed in Kyiv,” she said. “They are protecting Ukraine. It’s so hard.”

Badr Tawil, 23, a student, was among a group of Israelis evacuated from Ukraine who landed on Tuesday at Ben Gurion airport outside Tel Aviv.

“We just woke up once and we heard the sounds around us. Bombs everywhere. So we decided to leave, just to leave Ukraine,” he said.

Putin announced his demands to bring the war to an end in a phone call with his French counterpart Emmanuel Macron on Monday.

They included recognition of Russian sovereignty over Crimea and Ukraine’s demilitarisation.

Instead, Western nations have moved to increasingly isolate Russia, responding with an intensifying diplomatic, economic, cultural and sporting backlash.

The weekend featured a momentous series of announcements from Europe, with Germany unveiling a historic change to its defence policies.

The EU also said it would buy and supply arms to Ukraine, the first such move in its history.

Moscow came under fire on Monday at the UN General Assembly and the International Criminal Court (ICC), which opened a war crimes investigation.

At the UN Human Rights Council in Geneva on Tuesday, numerous diplomats walked out of the room when a pre-recorded video message by Russian Foreign Minister Sergei Lavrov was played.

And Turkey said it would implement an international treaty to limit ships passing through the Dardanelles and Bosphorus straits, a move requested by Ukraine to block the transit of Russian warships.

Within Russia, sanctions imposed by the West began to bite.

The Russian ruble crashed to a record low and the central bank to more than double its key interest rate to 20 percent.

Many raced to withdraw cash.

Retired soldier Edward Sysoyev, 51, fidgeted impatiently while in line at a bank in Moscow.

“Ninety percent of Russians are going to rush to withdraw their rubles and change them into dollars, property or even gold… it’ll be ordinary people who pay for this military bun-fight,” he said.

The response from the world of sports also gathered steam, as Russia was expelled from the World Cup and the country’s clubs and national teams were suspended from all international football competitions.

The International Olympic Committee on Monday urged sports federations and organisers to exclude Russian and Belarusian athletes and officials from international events.

Authorities in badminton, rugby, ice hockey, basketball and Formula One have all moved to act against Russia, either banning Russian national teams and clubs or suspending events in Russia.

In the latest developments, Russia was stripped of hosting the 2022 Volleyball World Championships, YouTube said it was blocking Russian channels RT and Sputnik in Europe and shipping giant Maersk said it would stop deliveries to Russian ports.

In the arts, the Munich Philharmonic said it was parting ways with star Russian conductor Valery Gergiev “with immediate effect” after he failed to respond to a request to denounce the invasion.