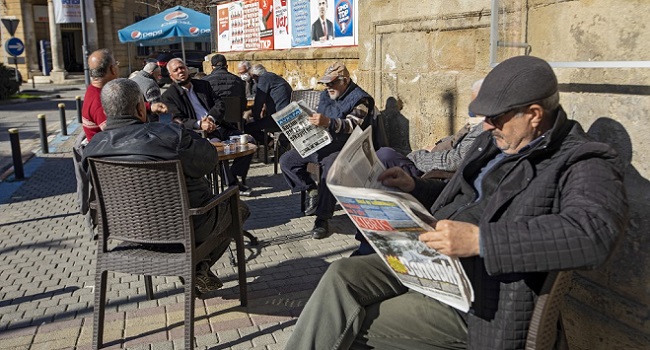 Every Sunday Noori Sani welcomes his old friends around a bountiful Turkish breakfast in Istanbul. But surrounding him now are empty tables on his terrace at his restaurant by the Blue Mosque.

“On a day like this, we should be full,” the owner of Serbethane restaurant said in the city’s historic district.

Within a few days of Russia’s invasion of Ukraine on February 24, Ukrainians and Russians cancelled reservations for trips, disastrous for Turkey where tourism represented 10 percent of GDP before the pandemic.

There had been high hopes for a tourism revival in 2022 and the sector was in desperate need of a boost after the Turkish lira lost significant value last year and inflation soared to over 50 percent in February.

Visitors from Ukraine and Russia made up over a quarter of all tourists who arrived in Turkey last year, usually opting for the turquoise beaches on the Mediterranean and Aegean, according to tourism ministry figures.

“Russia and Ukraine are very important markets for us,” Hamit Kuk of the Association of Turkish Travel Agencies (TURSAB) said.

TURSAB expected seven million Russians and 2.5 million Ukrainians this year, but Kuk said it would “likely have to review these figures”.

“The war between Russia and Ukraine is making everyone nervous here. Both from a human and commercial point of view,” Kuk said.

“Normally, there would be a rush of summer reservations in March. But the demand has stopped,” he added.

“If it goes on like this, there will be a very serious problem,” warned TURSAB president Firuz Ballikaya.

“We try to wait as calmly as we can.”

In front of the Hagia Sophia mosque, Russian tourists were rushing to follow their guide, ducking their heads and refusing interviews.

There were even a few Ukrainians, including a young couple from Kyiv who “arrived as tourists and became refugees” and who were now tearfully looking to leave for a third country.

“Maybe the United States?” they asked, wishing to remain anonymous.

The situation is tricky for Turkish travel agents like Ismail Yitmen because of Western sanctions against Russia.

In his office opposite the Hagia Sophia, Yitmen despaired.

“Travel agencies like mine working with Russia are really suffering right now. Taking into account the deposit amount I have paid for hotels, my loss is more than 11,000 euros ($12,000) so far,” he said.

“A group was supposed to arrive in Turkey in two months, but we couldn’t receive the money, so it’s cancelled. It’s because they stopped SWIFT transfers. We had already paid for the hotels.”

Several Russian banks were cut off from the SWIFT messaging system, which allows banks to communicate rapidly and securely over transactions.

Despite being a NATO member, Ankara did not sanction Russia and unlike many other countries, Turkey has not closed its airspace to Russian planes.

Before the coronavirus pandemic, the tourism sector was recovering after multiple terror attacks in 2015 and 2016 scared tourists away.

On the edge of the Middle East, the country had suffered in the few years from the impact of wars in Syria and Iraq, both on its southeastern border.

“When the war started in Iraq and then in Syria, European and American tourists stopped coming. They thought we were too near,” said Hassan Duzen, sitting with his friends at the back of his deserted carpet shop.

He was convinced the same thing would happen after the invasion.

“When they look at a map, they will see the Black Sea and think we are very close,” Duzen lamented. “Why would they take a risk?”

The Ukrainian couple had the same fears.

“We can’t stay here, this place isn’t safe, it’s too close. Their missiles can hit you,” the young man said, his eyes clouded with anxiety.