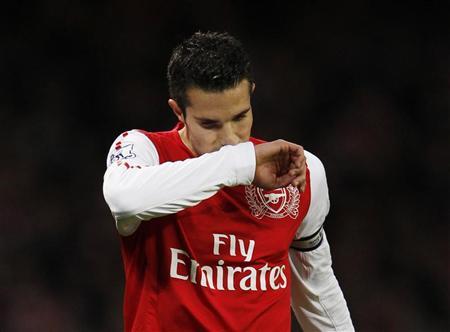 Arsenal striker Robin van Persie has announced that he will not be signing a new deal at the club.

The 28-year-old, who has a year left on his current contract, confirmed that he had met with manager Arsene Wenger and chief executive Ivan Gazidis.

But he revealed that they disagree on the way the club should move forward.

“I’ve thought long and hard about it, but I have decided not to extend my contract,” the Dutchman wrote on his personal website.

The striker had previously kept quiet over his future and refused to commit to a decision until Wednesday.

The Dutchman, who joined Arsenal from Feyenoord in 2004, added: “I love the club and the fans, no matter what happens. I have grown up and became a man during my time with Arsenal FC.

“Everybody at the club and the fans have always supported me over the years and I have always given my all (and more) on and off the pitch. I am very proud of being part of this fantastic club for the last eight years.

“As soon as Mr Gazidis is back from his two-week holiday in America further meetings will follow and I will update you if and when there are more developments.”

Reigning champions Manchester City have been linked with a move for the prolific frontman, while European heavyweights Barcelona, Real Madrid and Juventus are all thought to be interested.

Manager Arsene Wenger stated the importance of keeping Van Persie at the club earlier this month but the 28-year-old Dutchman has decided against prolonging his deal.