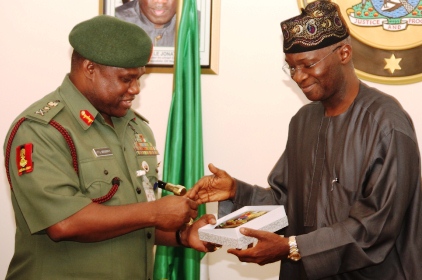 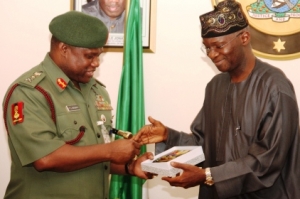 Lagos State Governor, Mr Babatunde Fashola, on Tuesday charged the military in the country to always do everything possible to protect and nurture the nation’s budding democracy to enable it grow and benefit all Nigerians.

The Governor, who made the call while hosting the new Chief of Army Staff, Lieutenant- General Kenneth Minimah, at the Lagos House, Marina, noted that it was the responsibility of the military to defend and support democracy to grow, once any society has moved to embrace it as its system of government.

Acknowledging that the nation’s military had done very well in this area as well as in the defence of the nation’s territorial integrity, Fashola noted that there were a few bad eggs that must not be allowed to destroy the good reputation of the military.

The Governor declared, “We know that the military has done very well; but like in every other institution, there is always a few bad eggs. They are in the minority and, as I always say, we must do everything possible to fish them out and put them where they belong.”

He congratulated the new Army boss on his elevation and noted that it has been the lot of every military officer who has had the privilege to serve in Lagos to be elevated as soon as he or she is moved from the state as was the case of the last two General Officers Commanding (GOCs) who moved from the state.

The Governor ascribed this to a rub-off effect of the state as ‘Centre of Excellence’ saying, “As the Centre of Excellence, I do not think anybody should expect anything less from those who served here because of the multi-national family that you interact with here and the experience that it brings. The challenges, of course, are many”.

He prayed that the new Army boss and his officers and men would find the needed inspiration as they continue to tackle the insecurity challenges facing the nation and, expressed the hope that the Military would also take all measures to secure the territorial integrity of the country.

“Let me lend my voice of inspiration as you and your officers and men respond to the national insecurity challenges that we face as a nation and we hope also that you will take all the measures that you need to secure the territorial integrity of the country”, he said.

Earlier, in his opening remarks, the Chief of Army Staff said that he was in Lagos as part of his tour of the Army formations under his command across the country, adding that the courtesy visit was a routine one normally made to Chief Executives of states where he visits before undertaking the tour of the formation in any state.

Thanking the Governor for rescheduling his travel for lesser Haddj in order to receive him, Lt. Gen. Minimah expressed delight at meeting the Governor and promised to do his utmost during his tenure to uphold democracy and defend the territorial integrity of the nation.