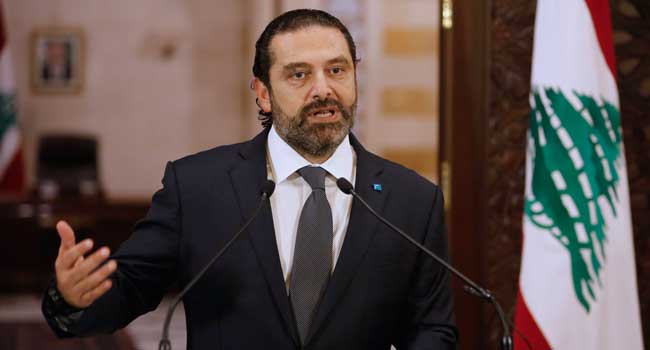 Lebanon has been gripped by unprecedented anti-government and anti-austerity protests for nearly two weeks, pushing Prime Minister Saad Hariri to announce sweeping economic reforms then offer to resign on Tuesday.

Here is a recap:

Demonstrations erupt on October 17, just hours after the government announces a tax on calls made via messaging services like WhatsApp.

Thousands take to the streets in the capital Beirut and the cities of Sidon and Tripoli, some chanting “the people demand the fall of the regime”.

There are clashes near government headquarters in Beirut, as demonstrators try to storm the building.

Security forces say around 40 of their members are wounded. They fire tear gas to try to disperse crowds.

On October 18, thousands of demonstrators from a broad spectrum of sects and political affiliations bring the capital to standstill.

They demand an overhaul of the political system, citing grievances from austerity measures to poor infrastructure.

The demonstrations swell over the following days, with major gatherings also in second city Tripoli and other locations across the country.

On October 19, the Maronite Christian Lebanese Forces party pull its four ministers from the cabinet.

On October 21, Hariri announces his government has approved a raft of economic reforms, including halving salaries of lawmakers and ministers.

But the protests continue, with demonstrators dismissing the new measures as insufficient and a desperate move by the political class to save their jobs.

On October 25, the head of the powerful Shiite movement Hezbollah, which with its allies holds the majority in parliament, tells his supporters to not take part in the protests.

“We do not support the resignation of the government,” Hassan Nasrallah says.

On October 26, loyalists of Hezbollah mobilise counter-demonstrations across the country, sparking scuffles with demonstrators.

But Hezbollah faces pressure, with protests breaking out in some of its strongholds, an unprecedented development in the politically fractured country.

Also on October 26, at least six civilians are reportedly wounded when soldiers confront protestors trying to block a road near Tripoli.

The following day, tens of thousands of protesters form a 170-kilometre (105-mile) chain across the country to symbolise national unity.

On October 29, dozens of counter-demonstrators descend on Riad al-Solh Square and attack anti-government protesters, torching tents and tearing down banners that call for “revolution”.

Less than an hour later, Hariri announces in a televised address that he will submit his and his cabinet’s resignation to Aoun later in the evening. 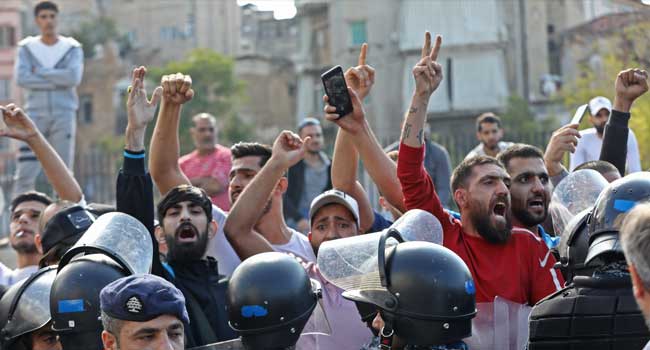 The resignation of Lebanon’s government in response to nearly two weeks of countrywide protests has made the crisis there “even more serious,” France’s foreign minister said Tuesday.

“Prime Minister (Saad) Hariri has just resigned, which makes the crisis even more serious,” Jean-Yves Le Drian told parliament in Paris, and urged the authorities in Lebanon “to do everything they can to guarantee the stability of the institutions and the unity of Lebanon.”

Hariri earlier announced he was submitting the resignation of his government, bowing to rising public pressure. His televised statement was met with cheers from crowds of protesters demanding change.

Le Drian said a condition for stability in any country “is a willingness to listen to the voice and demands of the population”.

“Lebanon needs a commitment from all political leaders to look within themselves and make sure there is a strong response to the population,” said the minister, offering France’s help.

A nationwide protest movement has gripped Lebanon for almost two weeks, calling for an overhaul of a political class viewed as incompetent and corrupt.

Lebanon’s embattled prime minister Tuesday said he would submit his resignation to the president, bowing to pressure from a mass protest movement that has crippled the country for nearly two weeks.

“It has become necessary for us to make a great shock to fix the crisis. I am going to the Baabda Palace to give my resignation,” Saad Hariri said in a televised speech.

Hariri said his decision was “in response to the will of many Lebanese who have taken to the streets to demand change” in what he called “historic” protests.

“Posts come and go, what matters is the safety and dignity of the people,” Hariri said.

It is unusual for a prime minister to announce his cabinet’s resignation before holding talks at the presidential palace in Baabda.

The sudden resignation — the third by Hariri in his career — will restart the complicated task of parliament forming a new government if it is accepted by the president.

It would also mark the most significant win by demonstrators who have thronged the streets of the country since October 17 demanding political change.

After the announcement, the main protest square in central Beirut erupted into applause, less than a hour after counter-demonstrators ravaged the site and attacked protesters.

“Saad Hariri is only the beginning,” said one protester shown on local television.

“We will continue” until others resign, he added.

The nationwide cross-sectarian protest movement is calling for an overhaul of a political class viewed as incompetent and corrupt.

Lebanon’s political leaders have appeared shell-shocked, trying simultaneously to express sympathy for the largely peaceful protests while warning of chaos in case of a power vacuum.

In a bid to appease the protests, Hariri had announced a package of economic reforms aimed at reviving an economy that has been on the brink of collapse for months.

But the protesters have accused the political elite of desperately attempting to save their jobs and have stuck to their demands for deep, systemic change. 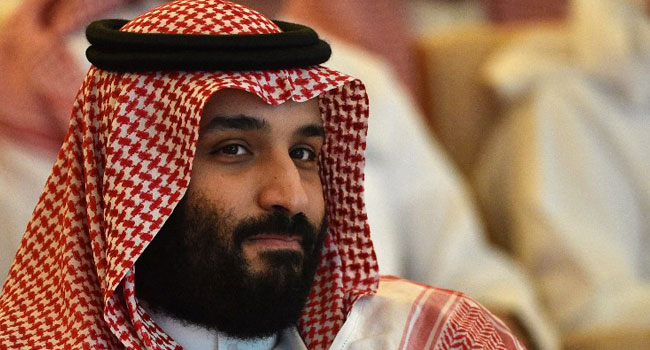 Saudi Arabia’s crown prince on Wednesday joked about allegations that Lebanon’s premier-designate Saad Hariri was detained in the kingdom last year, saying he hoped his current visit does not spark “abduction” rumours.

Hariri “will be staying in the kingdom for two more days, so I hope there are no rumours of his abduction,” Prince Mohammed bin Salman said while addressing the Future Investment Initiative forum in Riyadh.

The prince burst out laughing and shook hands with a smiling Hariri, who sat next to him on stage, as the audience also erupted in laughter.

But in November last year, Hariri announced he was stepping down in a televised address from the Saudi capital, causing observers to speculate he was being held against his will.

After French mediation, he rescinded his resignation the following month, and Saudi Arabia has denied intimidating Hariri into quitting his post.

Hariri was named premier for a third term in May after Lebanon’s first parliamentary elections in nine years but has since struggled to form a cabinet.

Hariri, a dual Saudi citizen, has thrown his support behind Prince Mohammed as he faces global outrage over the murder of Saudi journalist and government critic Jamal Khashoggi at the kingdom’s consulate in Istanbul. 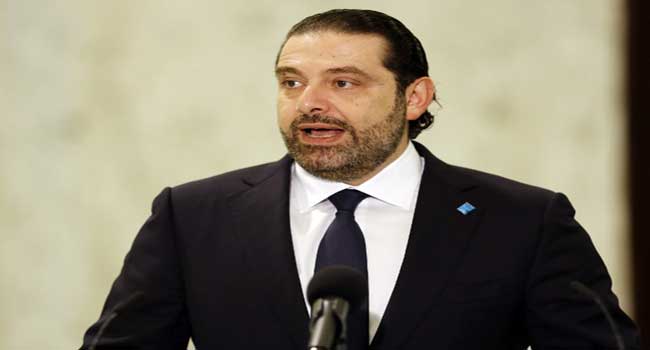 Lebanese Prime Minister Saad Hariri announced his resignation on Saturday, citing Iran’s “grip” on the country and threats to his life.

“I announce my resignation from the post of prime minister,” Hariri said in a speech broadcast from Saudi Arabia by the Al-Arabiya news network.

“I felt what was being covertly plotted to target my life,” he said.

Hariri’s personal security concerns appeared to gain little traction among the public. Social media were flooded with messages deriding him for choosing to resign from abroad and on a foreign channel.

The two-time premier, whose father Rafik held the same position for years and was assassinated in 2005, accused Iran and its powerful Lebanese Shiite ally Hezbollah of seeking hegemony in the region.

The 47-year-old Sunni politician’s resignation comes less than a year after his government, to which Hezbollah’s political wing belongs, was formed.

“Iran has a grip on the fate of the region’s countries… Hezbollah is Iran’s arm not just in Lebanon but in other Arab countries too,” Hariri said.

He accused Tehran of “sowing discord among the children of the same nation and creating a state within the state… to the extent that it gets the final say on how Lebanon’s affairs are run”.

Iran dismissed his accusations as “unfounded”.

Hariri’s “repetition of unreal and baseless accusations… against Iran show that the resignation is designed to create tensions in Lebanon and in the region”, Iranian foreign ministry spokesman Bahram Ghassemi said.

“In recent years, Hezbollah has used the power of its weapons to impose a fait accompli,” he said, reading a speech from behind a desk.

Hezbollah is a vital ally of Syrian President Bashar al-Assad in the war the Damascus regime is waging against the Islamic State group and armed opposition movements.

It enjoys broad support from Iran and is the only Lebanese party to have kept its weapons after the 1975-1990 civil war.

Hezbollah’s arsenal has since grown exponentially and now outstrips that of the nation’s own armed forces.

The group claims it is the only credible rampart against neighbouring Israel, and its refusal to disarm is the main political crux in Lebanon.

Hezbollah members have been accused over the 2005 assassination in a massive car bomb blast of Rafik Hariri, the dominant figure in Lebanon’s post-war political landscape.

He made his fortune in Saudi Arabia, where his son Saad was born.

Saudi Arabia is Iran’s main regional rival, and the two powers’ tussle for influence has played out in ongoing conflicts in Iraq, Syria and Yemen.

The office of Lebanese President Michel Aoun, a veteran Christian leader allied to Hezbollah, issued a statement saying it was waiting for Hariri’s return to Lebanon “to enquire about the circumstances of his decision and decide on the next steps”.

Hariri said in his speech that the political climate in Lebanon was reminiscent of that which prevailed before his father was killed.

Walid Jumblatt, one of Lebanon’s political heavyweights and the country’s most prominent Druze leader, said Hariri’s resignation could adversely affect a country already under huge strain.

He argued it was the latest manifestation of the tug-of-war between Saudi Arabia and Iran and called for intensifying diplomatic efforts to solve the feud.

“Lebanon is too small and vulnerable to bear the economic and political burden that comes with this resignation,” he said on social media. “I will continue to call for dialogue between Saudi Arabia and Iran.”

Even as he resigned, Hariri warned his foes: “Our nation will rise just as it did before and the hands that want to harm it will be cut.”

Lebanese political analyst Hilal Khashan argued that Saudi Arabia had been piling the pressure on its protege lately and “summoned” him to Riyadh.

He said Hariri’s move could start “a cold war in Lebanon that could escalate into a civil war” or even a regional offensive on Hezbollah.

It is unclear who could replace Hariri at this stage.

Under a power-sharing system that helped end Lebanon’s 15-year civil war, the president must be a Christian, the prime minister a Sunni and the speaker a Shiite.