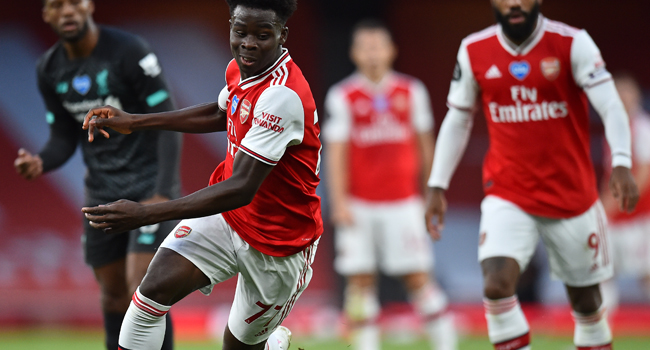 He said this on Thursday in an Instagram chat with the NFF media department, noting that there are many players of Saka’s pedigree in Nigeria willing to play for the three-time African champions.

Pinnick, who is the NFF President, said although the 18-year-old is an excellent player, anyone interested to feature for Nigeria must show zeal.

According to him, the football body will always welcome Saka or others with interest in playing for the country.

“There are many players that play like Bukayo Saka in Nigeria. We don’t want to go begging any player,” Pinnick said.

He added, “It is about ardour and fervour. If a player has decided for Nigeria and only want to be assured that he would be much welcome, we will come in and provide that assurance.”

Similarly, Super Eagles Head Coach, Gernot Rohr had in the past said he would not beg anyone to play for Nigeria and that players must show interest in the country first before inviting them.

In December 2019, Saka told the BBC that he had yet to decide the country he would play for at the senior level.

The versatile player, however, said he had not been approached by either the Nigerian or English side.

Saka who is having a breakthrough season with the Gunners after making a senior debut in 2018, is eligible to play for the Super Eagles and the English Three Lions.

He was born to Nigerian parents and has also played for the English team at age grade levels.

Since breaking into the Arsenal first team this term, he has scored two goals and made five assists in 15 games for the North London side.

He recently signed a long-term deal with the Premier League club following his impressive performances.