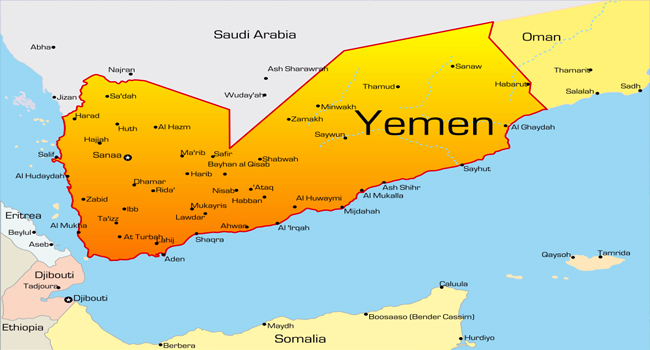 Seventeen civilians were killed in an attack in a market in Yemen’s northern Saada governorate, the United Nations said, the third deadly assault on the same location in just over a month.

The attacks come despite relative calm in Yemen, where large-scale combat between government troops — backed by a Saudi-led military coalition — and the Iran-aligned Huthi rebels has largely subsided.

The UN said 12 Ethiopian migrants were among the 17 civilians killed in the incident on Tuesday at the Al-Raqw market in Saada governorate, a Huthi rebel stronghold.

At least 12 people were wounded, it said, without saying who was responsible or what weaponry was used.

The Saudi-led coalition acknowledged on Thursday it had carried out an operation in Monabbih, a Saada district where the market is located.

The Joint Incident Assessment Team (JIAT) — which the coalition established but says operates independently — will investigate “the possibility of collateral damage”, coalition spokesman Turki al-Maliki said in a statement.

The coalition did not provide further details.

An attack on Al-Raqw market on November 22 killed 10 civilians, again including Ethiopian nationals, and just days later, at least another 10 civilians were killed and 22 wounded in a second such incident.

“The attacks on Al-Raqw market raise deeply troubling questions about the commitment of the parties to the conflict to uphold international humanitarian law,” Lise Grande, the UN’s humanitarian coordinator for Yemen, said Wednesday.

“Every attack of this kind is a gross violation,” she said in a statement.

The UN says 89 civilians have either been killed or wounded in the attacks on the market.

Tens of thousands of people, mostly civilians, have been killed and millions displaced since March 2015, when the Saudi-led coalition intervened in Yemen’s conflict. 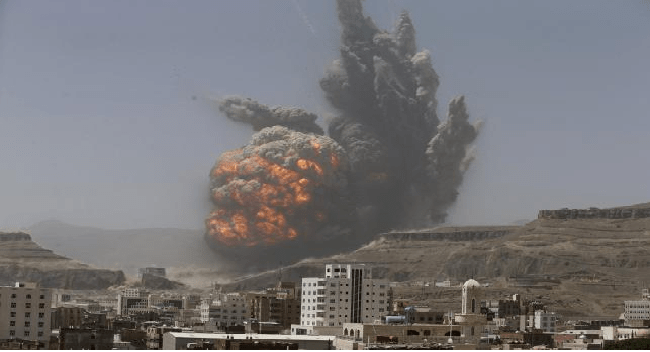 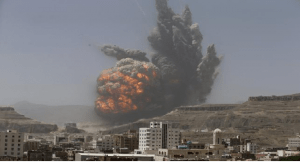 Saudi Arabia has announced on Tuesday that it was ending a month-long campaign of air strikes against the Houthi rebels, who seized large areas of Yemen to back a political solution which will bring peace to its war-ravaged neighbour.

The ceasefire, which followed months of factional fighting between the militant group and forces loyal to the government, which was driven out of the capital Sanaa, was welcomed by Iran.

“Operation Decisive Storm has achieved its goals including removing the threat to Saudi Arabia and neighbouring countries, especially in terms of heavy weapons,” said a statement carried by Saudi State News Agency.

The report says a new phase called “Operation Restoring Hope” was beginning. It would combine political, diplomatic and military action but would focus on “the political process that would lead to a stable and secure future for Yemen”.

Saudi spokesman, Brigadier General Ahmed Asseri, said the alliance may still target Houthis. “The coalition will continue to prevent the Houthi militias from moving or undertaking any operations inside Yemen.”

“The United States welcomes Tuesday’s announcement by the government of Saudi Arabia and its coalition partners of the conclusion of Operation Decisive Storm in Yemen,” a spokesman for the White House National Security Council, Alistair Baskey, said. 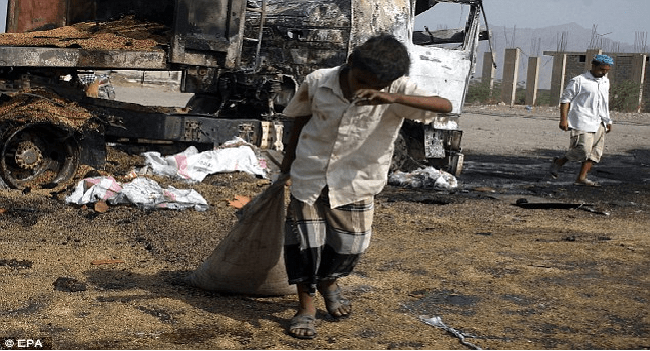 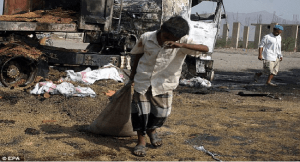 The International Committee of the Red Cross (ICRC) is set to make emergency aid flights into Yemen’s capital, Sanaa.

The ICRC has been given permission to land planes carrying staff and medical supplies in Yemen, which it said was facing a humanitarian emergency.

Fighting had intensified in the southern port of Aden, as government troops battle the Houthis.

About 500 people had been killed over the past two weeks in Yemen.

However, the ICRC is sending a cargo plane carrying vital medical supplies, and a small passenger plane of aid workers.

Eight Houthi fighters were killed in an air strike before dawn in the suburbs of the northern city of Saadah, home of the Shi’ite Muslim movement which spread from its mountain stronghold to take over the capital Sanaa six months ago.

Local officials said strikes also hit air defense and coastal military units near the Red Sea port of Hodaida, and targets on the outskirts of Aden. They also hit a bridge on the road south to Aden, apparently trying to block the Houthis from sending reinforcements to their fighters in the city.

Meanwhile, the cargo plane is still awaiting approval to send a surgical team by boat to Aden.

The ICRC has, however, called for a 24-hour ceasefire in Aden, while Russia has also urged the UN Security Council to support a “humanitarian pause” in the air strikes.

Pakistan’s parliament is debating whether to join the Saudi-led coalition after a Pakistani aircraft rescued 170 people from Sanaa on Sunday. 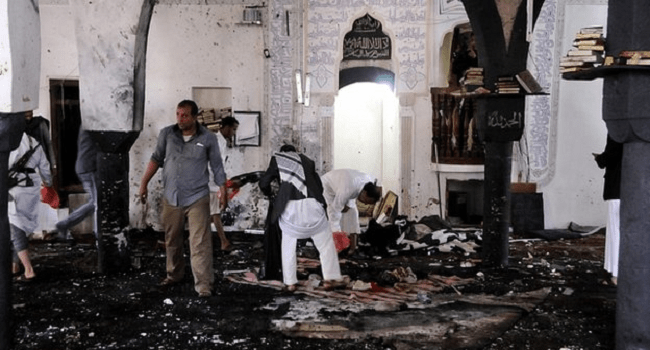 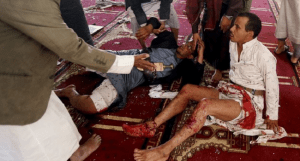 Suicide bombers have launched a deadly attacked on two mosques in Yemen’s capital, Sanaa, killing scores of people and wounding many.

Worshipers were said to be attending noon prayers at the Badr and al-Hashoosh Mosques when the attack struck.

The Mosques are used mainly by supporters of the Zaidi Shia-led Houthi rebel movement, which controls Sanaa.

Islamic State (IS), had said it was behind the attacks.

A statement from the group was published on Twitter accounts known as ‘reliable sources for IS propaganda’.

There are also severe tensions between the Houthi rebels and various powerful, armed elements in Yemen, including militants from Al-Qaeda.

Witnesses said two suicide bombers attacked the Badr mosque, in the south of Sanaa saying, one of the entered the building and detonated his explosive device among dozens of worshipers, adding that survivors sought to escape through the main gates, where the second bomber was waiting.

Two more bombers attacked the Al-Hashoosh mosque, in the north of the capital, with one detonating explosives near the entrance, and the other running into the mosque itself.

It was recorded that there was blood-shed as many of those not killed by the explosion were affected with serious injuries. 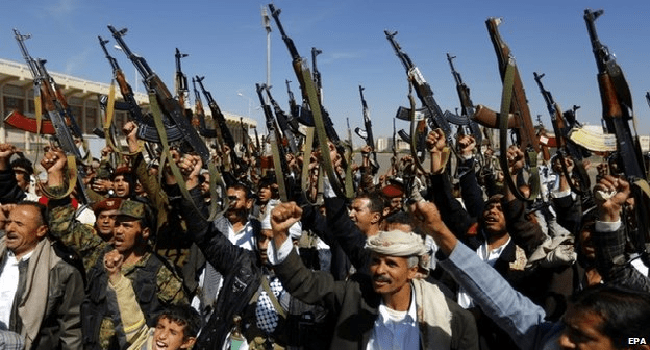 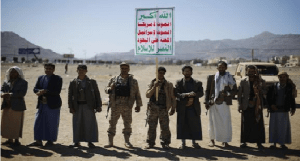 Yemen’s Shia Houthi rebel movement has announced on Friday that it is taking over the government, dissolving the parliament and creating new interim assembly, a move that could ease a power struggle that forced the president to step down last month.

The rebel movement in a televised statement said that a presidential council would act as the government for an interim period.

The movement made it known in a television statement that the new assembly will elect a five-member interim presidential council to manage the country’s affairs in a transitional period of up to two years.

The Houthis has set a Wednesday deadline for political parties to reach an agreement on ending the country’s political turmoil, threatening to act unilaterally otherwise.

The Shi’ite Muslim movement, which is backed by Iran, had set a Wednesday deadline for political factions to agree a way out of the crisis, otherwise, the group said, it would impose its own solution.

Powerful Sunni and southern political parties have not recognised the takeover by the Houthis, who are minority Shia from the north.

Iran has been accused of alleged financial and military support to the Houthis, something both have denied.

Yemen has been in political limbo since President Abd-Rabbu Mansour Hadi and the government of Prime Minister Khaled Bahah resigned after the Houthis seized the presidential palace and confined the head of state to his residence in a struggle to tighten control.

The Houthis, who became power brokers when they overran Sanaa in September, had been holding talks with main political factions trying to agree on a way out of the stand-off.

Hundreds of Yemeni demonstrators stormed the U.S. embassy in Sanaa on Thursday in protest at a film they consider blasphemous to Islam, and security guards tried to hold them off by firing into the air.

The attack followed Tuesday night’s storming of the United States Consulate in Benghazi, where the ambassador and three other staff were killed. President Barack Obama said the perpetrators would be tracked down and ordered two destroyers to the Libyan coast, but there were fears protests would spread to other countries in the Muslim world.

Young demonstrators shouting “we redeem, Messenger of God” smashed windows of the security offices outside the embassy with stones and burned cars before breaking through the main gate of the heavily fortified compound in eastern Sanaa.

Tyres blazed outside the compound and protesters scaled the walls.

“We can see a fire inside the compound and security forces are firing in the air. The demonstrators are fleeing and then charging back,” one witness told Reuters.

Witnesses said there were some injuries on both sides but gave no exact figures.

Yemen, a key U.S. ally, is home of Al Qaeda in the Arabian Peninsula (AQAP), which is viewed by Washington as the most dangerous branch of the militant network established by Osama bin Laden.

Yemen is fighting an al Qaeda-backed insurrection largely in the south of the country. 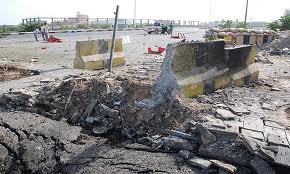 A suicide bomber blew himself up at the entrance of a police academy in the Yemeni capital Sanaa on Wednesday, killing 20 people and wounding dozens more.

“The suicide bomber blew himself up at the police academy in Sanaa and killed at least 20 people and wounded dozens,” a security official who claimed  anonymity said.

He added that most of the casualties were police cadets who were leaving the academy for the weekend.

Wednesday’s blast is the second deadliest in the capital since President Abdrabuh Mansur Hadi took power in February and pledged to destroy Al-Qaeda’s presence in the country.