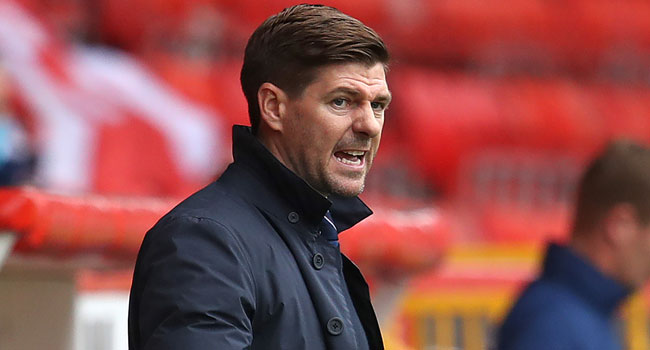 Rangers have spent nearly a decade in the doldrums but their revival under Steven Gerrard appears to be coming just in time to stop rivals Celtic from winning a historic 10th consecutive Scottish league title.

The club have had a bumpy ride since they last won the league in 2011. Financial troubles led to liquidation and the club were reformed in the fourth tier of Scottish football.

Rangers returned to the Scottish Premiership in 2016, but even then the turmoil did not end as three managers were dismissed in little over a year trying to bridge the chasm Celtic.

Now it is the blue half of the Glasgow divide that enjoy an 11-point lead at the top of the Scottish Premiership and are outperforming their rivals on the European stage.

Gerrard’s men are unbeaten in 22 games in all competitions this season, confirming the steady progress he has made since landing his first senior managerial role in 2018.

The former Liverpool captain famously never won a league title as a player, but he will forever be hailed a Rangers’ hero if he denies Celtic the coveted 10-in-a-row.

Gerrard has benefited from a level of patience scarcely afforded to Old Firm managers.

He is the first Rangers manager to begin a third season in charge without winning a trophy in his first two.

Celtic have not just swept the board in the league, but won all of the past 11 domestic trophies on offer in Scotland and can make that 12 in the Scottish Cup final next month.

However, the tide appears to have turned, with Celtic boss Neil Lennon clinging to his job as calls grow from fans for the Northern Irishman to go after a run of two wins in nine games.

“I look at the league table every time we play, I’m not going to deny that,” said Gerrard after a 4-0 demolition of third-placed Aberdeen last weekend.

“But I’ve never known a manager to get carried away in November. I don’t know how many games we’ve played, but there is a lot of football to be played, a lot of challenges, a lot of big hurdles to get over.

“I’d much rather be where we are of course. But stay humble.”

The experience of Gerrard’s first two seasons in charge shows much can change in the second half of the season.

In December, for the past two years, Celtic were beaten in a derby to seemingly set up a proper title race, only to come back stronger as Rangers wilted in the New Year.

Celtic have two games in hand that could cut the gap to five points, but the Cup final means the Hoops will miss another league match in December, offering Rangers the chance to establish a 14-point lead before the sides meet again on January 2.

Sustained progress in the Europa League over the past three seasons has allowed Rangers to build a depth of squad that should last the course domestically.

The club’s accounts released last week show the faith that has been placed in Gerrard in terms of their willingness to build a strong squad — the operating loss for the year increased from £11.6 million ($15.4 million) to £15.9 million.

Unlike Celtic, who have consistently sold their biggest assets to keep balancing the books, Rangers’ investors are banking on Gerrard delivering a title and potentially Champions League football next season before selling any major players.

“I think the important thing to know is that this team is in much better shape than it was when we came through the door,” said Gerrard, in defence of those figures.

“The team is littered now with big assets. The team is worth an awful lot of money now compared to what it was.”

That gamble is paying off. Rangers are off to their best league start in 53 years, with 13 wins and just three goals conceded in their opening 15 games.

Celtic’s consistency has set the bar in a nine-year run, but the Rangers are now the ones with a ruthless streak. 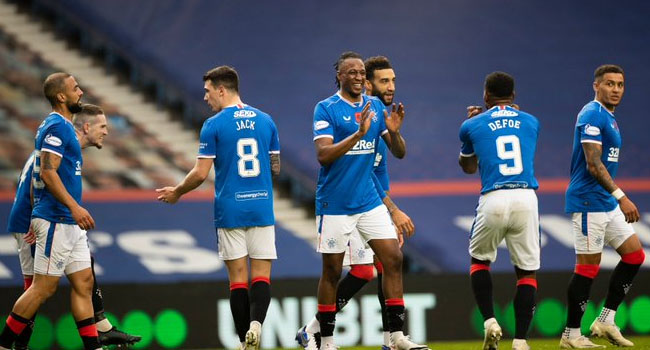 Rangers restored their commanding nine-point lead at the top of the Scottish Premiership with an 8-0 humbling of Hamilton on Sunday as Celtic bounced back to form with a 4-1 win at Motherwell.

Steven Gerrard’s men have played two more matches than their Glasgow rivals but showed why they are now the bookmakers’ favourites to end Celtic’s record-equalling run of nine straight league titles.

Hamilton shocked the hosts on their last visit to Ibrox in March but Rangers are a transformed side since Scottish football’s return in August, unbeaten in 20 games in all competitions this season.

Joe Aribo, Kemar Roofe and James Tavernier all scored twice, while Scott Arfield and Brandon Barker were also on target against the rock-bottom Accies.

Gerrard hailed his rampant team, who scored eight goals in the top flight for the first time since 1981.

“It has been coming, we have threatened to do that,” he said. “But the pleasing thing today was that we were very clinical.”

But he remained cautious despite the thumping win.

“Look, we are not at the stage yet where we can play with ego in any game or at any stage. We are trying to become a winning team, a successful team. We are in no position to disrespect any opponent or any team.”

Mohamed Elyounoussi faced a backlash from ex-Celtic players for being seen on his mobile phone after being substituted in midweek, but responded with a hat-trick at Fir Park to ease the pressure on manager Neil Lennon.

“I thought we were really well motivated, we looked far more like ourselves,” said Lennon. “The players responded brilliantly, it’s a fantastic response and win.

“They know they can play a lot better than they’ve showed. There was better body language about us today, better hunger. That’s what we are looking for, that’s a really good barometer for us now.”

Elyounoussi settled any nerves among the visitors early on as he pounced after Albian Ajeti’s strike came back off the post.

Tom Rogic then teed up the on-loan Southampton winger for his second from close range.

Celtic’s defence has been the source of most of Lennon’s problems in recent weeks and their frailty from set-pieces was again exposed when Declan Gallagher’s header halved Motherwell’s deficit 18 minutes from time.

However, Elyounoussi quickly responded with a towering header of his own at the back post to restore Celtic’s two-goal cushion.

“That was a big misunderstanding, I let my feet do the talking,” said Elyounoussi on the controversy over the phone.

“It was a good day. We got goals, we showed character, responded from Thursday’s game and got the points.”

France under-21 stars Odsonne Edouard and Olivier Ntcham have also failed to match their standards of previous seasons so far this campaign.

But they came off the bench to combine for Celtic’s fourth as Edouard teed up Ntcham to side-foot into the bottom corner. 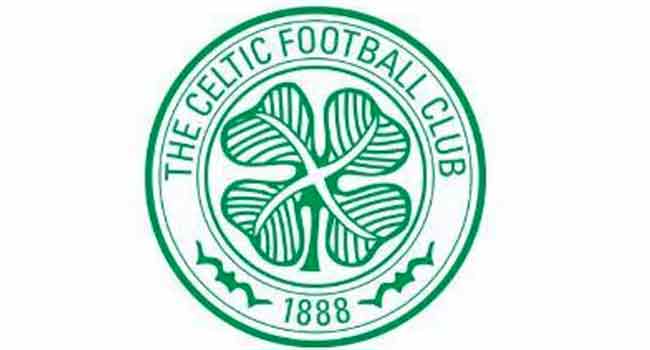 Celtic’s record-breaking 69-game unbeaten run in Scottish domestic football came to a stunning end as the champions were thrashed 4-0 by Hearts on Sunday.

Brendan Rodgers’ side lost for the first time since St Johnstone beat the Glasgow club 2-1 in May 2016.

Goals from Harry Cochrane and Kyle Lafferty put Hearts two up by half-time at Tynecastle in Edinburgh before David Milinkovic’s brace sealed Celtic’s fate in the Scottish Premiership clash.

Despite their painful loss, Celtic remain two points clear of second-placed Aberdeen with a game in hand.

Hearts, who were forced to make seven changes for the match due to a horrendous injury list, took a deserved 26th-minute lead through 16-year-old Cochrane before former Rangers striker Lafferty doubled their advantage nine minutes later.

On-loan winger Milinkovic made it 3-0 two minutes after the break before he added a fourth from the penalty spot with 15 minutes remaining to seal Hearts biggest victory over the Hoops since 1895.

It was the first taste of Scottish defeat for Rodgers, who has won four successive trophies since arriving at Celtic Park last year, as his side failed to score for the first time in 74 matches.

Celtic restored Kieran Tierney, Jozo Simunovic and Mikael Lustig to their defence after resting them for the midweek win over Hamilton.

However, they looked shambolic at times when dealing with a Hearts side that put them under pressure from the start.

The warning signs were there when Lafferty got behind the Celtic defence early on, only for a contentious offside decision to save the visitors. Then Ross Callachan came close with a fizzing strike from just outside the box.

Christophe Berra then sent a header just wide from a Don Cowie corner before teenager Cochrane got his first goal for Hearts with a superb strike.

Cowie pounced on some loose play by Dedryck Boyata and worked the ball to Cochrane who took a touch before smashing a left-foot strike low past the despairing Craig Gordon.

Celtic barely had time to reorganise before Lafferty added a second.

Milinkovic burst into the Celtic half and picked out Lafferty with a great cross-field pass.

The Northern Irish striker took a couple of touches before firing a sensational angled strike in off the far post from 20 yards.

The Hoops made two changes at the break with Moussa Dembele and Stuart Armstrong coming on for Olivier Ntcham and Kieran Tierney, but they couldn’t stop Hearts adding a third almost immediately.

Celtic defender Simunovic made a mess of dealing with a hopeful long ball and it fell to Milinkovic at the edge of the box. He took it round Gordon before rolling a shot past Mikel Lustig on the line.

Celtic did rally with Jon McLaughlin at full-stretch to push away a fierce strike from Leigh Griffiths and Scott Sinclair blazing over.

But it was Hearts who added another from the spot through Milinkovic after Gordon needlessly brought down Callachan as the Jambos recorded their third win in a row.