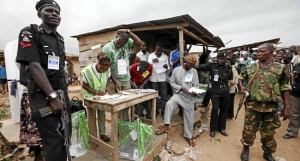 The Independent National Electoral Commission (INEC) in Nigeria has  presented Certificates of Return to winners of the gubernatorial and National Assembly elections in Cross River State .

Addressing the winners shortly before the presentation at the INEC headquarters in Calabar, the State capital, on Tuesday, the Resident Electoral Commissioner (REC), Sylvester Ezeani, urged the recipients to fulfill their campaign promises.

According to Mr Ezeani, the presentation of their certificates to the winners, which was carried out by the National Resident Electoral Commissioner, Thelma Iremirem, confirmed the Senators-elect winners of the election and marked the end of the electoral process.

Mr Ezeani reiterated the commitment of INEC to continually improve on the integrity of future elections.

Responding on behalf of the recipients, the Governor-elect, Senator Benedict Ayade promised to work with other political parties in Cross River State in order to foster development across the state.

However, two senators-elect were absent at the ceremony. They are expected to visit INEC’s headquarters in Abuja to obtain their certificates of return, as such documents are usually not given by proxy.

Senator Ayade, a member of the Peoples Democratic Party (PDP) was declared winner of the governorship election in Cross River State with 342,016 votes.

His two opponents, Mr Odey Ochicha of the All Progressives Congress (APC) had 53,983 votes, while Mr Fidelis Ugbo of the Labour Party scored a total of 36,918 votes.