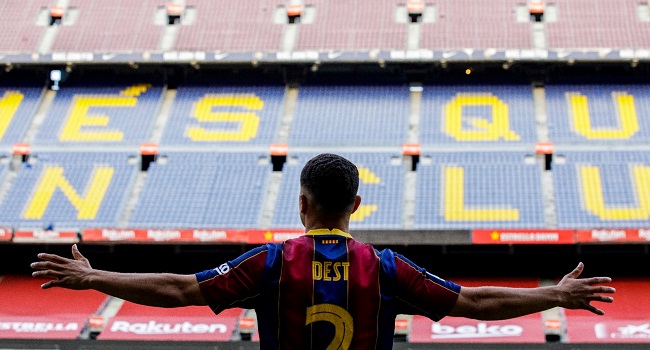 Barcelona have completed the signing of Ajax defender Sergino Dest, the clubs announced on Thursday.

“The player will sign a contract for the next five seasons, through to the end of the 2024/25 season, with a buyout clause set at 400 million euros,” Barca added in a statement.

Dest will offer competition at right-back after Nelson Semedo was sold to Wolves. He made 35 appearances for Ajax last season, after making his debut in July.

The signing also continues the club’s attempts to refresh the squad.

“It’s a matter of changing things, having young players for the future of this Barca,” said Ronald Koeman on Wednesday, when asked about Dest.

Barcelona’s statement added: “Sergino Dest combines many excellent qualities needed in a full back: attacking when called for, solid defensively, unruffled in possession and creative with it.

“The defender has the ability to take players on and his pace is a virtue going forward and defending. Those qualities will be on display from now on in a Barca shirt, a challenge for a fearless young full-back.”