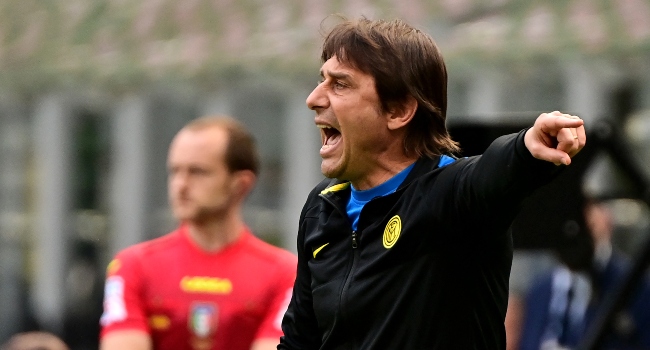 Antonio Conte parted company with Inter Milan on Wednesday just days after lifting their first Serie A title in 11 years amid clashes with the club’s cash-strapped Chinese owners on the way forward.

The ambitious Italian refused Suning’s planned cost-cutting which would have prevented him from building the team he wanted to challenge at home and in Europe.

The former Chelsea and Juventus boss took over in May 2019 on a three-year contract worth a reported 12 million euros ($14 million) annually.

But the 51-year-old leaves the San Siro one year early, Inter confirming “an agreement has been reached with Antonio Conte for the termination of his contract by mutual consent”.

“Antonio Conte will forever remain a part of our club’s history,” the statement added.

Severing Conte’s contract has cost the club a reported seven million euros ($8.5 million), while his final year’s salary would have been around 12 million.

As part of the deal Conte will not be allowed to coach another Serie A club next season, according to reports.

Among the names being touted to replace him are Lazio boss Simone Inzaghi and former Juventus coach Massimiliano Allegri, who has also been linked with a return to the Turin club.

For Conte, future destinations could include Tottenham Hotspur and Real Madrid.

A demanding coach, whose training sessions were described by Belgian striker Romelu Lukaku as ‘like a war zone,’ Conte leaves Inter at the summit of Serie A, a feat last achieved by Jose Mourinho, who won the treble with the club in 2010.

It was a fifth league title for Conte having won three with Juventus between 2012 and 2014 and the Premier League with Chelsea in 2018.

But tensions had been ongoing, having already threatened to leave last summer after losing the Europa League final to Sevilla and finishing second in the league to Juventus.

Despite a second Champions League group stage exit this season Inter clinched their 19th Scudetto with a 12-point lead on AC Milan and with four games remaining.

“This is one of the most important successes of my career,” Conte said.

“Deciding to join Inter was not easy, the team was not equipped to win immediately.

“Furthermore, the opponent was Juventus for whom I had worked for a long time. Today we can say that our sacrifices have paid off.”

Conte rebuilt the ‘Nerazzurri,’ getting the best out of players including former Manchester United star Lukaku, Lautaro Martinez and Nicolo Barella, while others like Christian Eriksen and Ivan Perisic overcame initial difficulties to adapt to Conte’s style.

Captain Samir Handanovic and Lukaku both paid tribute to Conte on social media.

“You came at the right time and basically changed me as a player and made me even stronger mentally,” said Lukaku, Inter’s top scorer the past two seasons.

“Winning is all that matters to you. Thank you for all you did. I owe you a lot.”

Slovenian Handanovic, 36, who won his first trophy after nine years with the club, added: “You were the one who always raised the bar and put the right pressure on everyone… the one who made the difference. Thanks mister.”

The Suning Group shut down their Chinese club Jiangsu FC in February months after winning the Chinese Super League title.

Five days ago, Inter secured a cash injection worth 275 million euros with US investment firm Oaktree, in the form of a loan reported to be over three years.

In this context, Suning wants to save as much as possible both on the purchase of new players and salaries, and possibly selling those with the highest value, an approach unacceptable for Conte.

Conte’s three-year spell at Juventus remains the longest of a career already spanning seven clubs, and the Italian national team.

He took Bari and Siena into Serie A, began Juventus’ nine-year domination of the Italian top-flight, guided an unfancied Italy to the semi-finals of Euro 2016 and won the Premier League in his first season at Chelsea.

But he has never tasted European success, falling short with both Juventus and Chelsea before his near-miss with Inter. 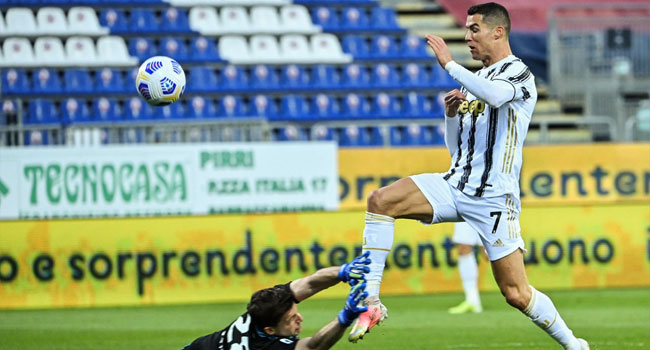 Cristiano Ronaldo hit back at his critics with a quick-fire hat-trick as Juventus brushed aside Cagliari 3-1 on Sunday, five days after their Champions League elimination, while Inter Milan moved nine points clear at the Serie A summit.

Portuguese star Ronaldo bore the brunt of the criticism for Juve’s latest European flop after failing to score in either leg of the last-16 defeat by Porto, while also being partly at fault for what proved to be the goal that knocked them out.

But the 36-year-old scored a header in the 10th minute at the Sardegna Arena, added a second from the penalty spot 15 minutes later, and completed a ‘perfect’ treble on 31 minutes with a fine left-footed strike.

Defending champions Juventus are 10 points behind leaders Inter Milan, who beat Torino 2-1 earlier Sunday, but with a game in hand.

“Our approach was spot on and it was important to get off on the right foot after being knocked out the other night,” said Pirlo.

He could also have been sent off after a quarter of an hour, receiving only a yellow card for dangerous play as his boot struck Cagliari goalkeeper Alessio Cragno in the face while attempting to meet a Federico Chiesa cross.

Ronaldo is the leading scorer in Serie A with 23 goals this season, ahead of Inter’s Romelu Lukaku, who has 19.

His career tally is now 770 goals, overtaking Brazil legend Pele’s 767 scored in official matches which he matched earlier this month.

“It makes me laugh. I would never have imagined discussing the value of Cristiano Ronaldo,” said Paratici.

“It’s a privilege to have him with us, he’s part of our future.”

Lautaro Martinez scored a brilliant 85th-minute winner in a tight game against 18th-placed Torino to keep Inter on track for a first league title since 2010.

Antonio Conte’s Inter once again needed their strike duo of Lukaku and Martinez to find a way to win in Turin.

Christian Eriksen came off the bench on 56 minutes and had an immediate impact, playing a part in the move which resulted in Torino defender Armando Izzo fouling Martinez in the penalty area.

Lukaku fired home the resulting spot-kick in the 62nd minute.

But Martinez snatched the victory by getting his head to an Alexis Sanchez cross for his 14th league goal this term.

Inter stretched their winning run to eight matches to move further ahead of AC Milan.

AC Milan’s hopes of a first title since 2011 diminished as they failed to win for their third consecutive game at the San Siro, days before they host Manchester United in their last 16 Europa League decider.

Matteo Politano scored the only goal just after the break with Milan finishing the game a man down after Ante Rebic was sent off in injury time for arguing with officials.

Napoli’s Champions League hopes have been revived as they move above Roma into fifth before the two sides play next weekend after the capital side fell 2-0 at 19th-ranked Parma.

Valentin Mihaila opened the scoring on nine minutes with Hernani added a second from the spot to snap Parma’s 17-match winless run. 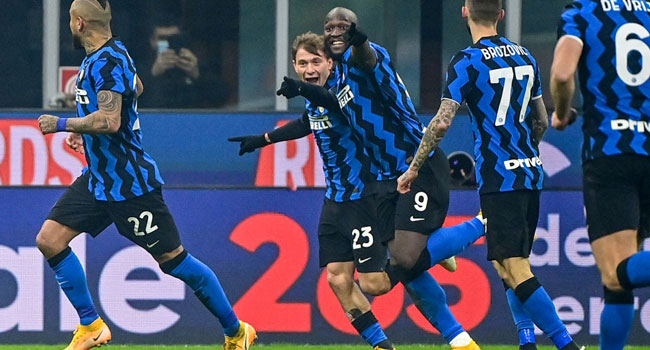 Inter Milan beat champions Juventus 2-0 to move level on points with Serie A leaders AC Milan on Sunday, boosting their hopes of a first league title since 2010.

Arturo Vidal got his head to a Nicolo Barella cross after 12 minutes for his first league goal for Inter Milan against his former club.

Barella added the second six minutes after the break as Inter claimed a first win over Juventus since September 2016, ending a series of seven matches without a win.

Inter are equal on 40 points with local rivals Milan, who travel to Cagliari on Monday, with Juventus fifth, seven points behind the Milan teams with a game in hand.

For Inter coach Antonio Conte it was a first win in four meetings against the club he led to the first three of their current run of nine consecutive league titles.