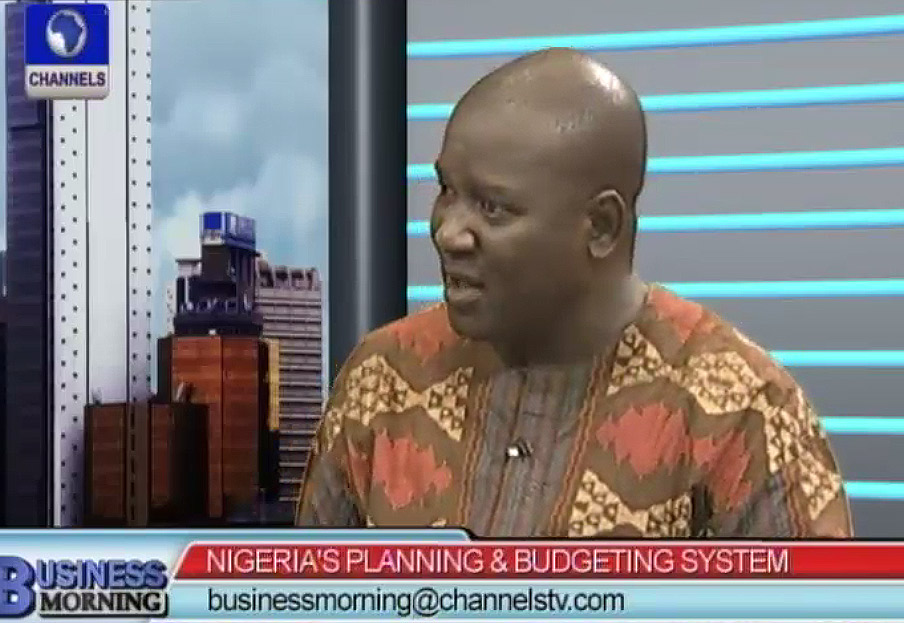 An economist, Kola Ogunleye has kicked against perceived moves by the National Assembly to transfer the budgeting office from the Ministry of Finance to that of National Planning.

The Senate is seeking a law that will move the budget office from the Ministry of Finance to that of National planning or to make it autonomous arguing that the finance ministry is already overburdened.

Mr Ogunleye however said, “As it stands today, they cannot do that if they have to take cognizance of the constitutional provisions in so far as finance responsibility is concern.”

The economist agreed with the Coordinating Minister of the Economy and Minister of Finance, Ngozi Okonjo-Iweala, who on Tuesday expressed stiff opposition to the moves by the Senate to remove the Budget Office from her ministry.

She said this while speaking at a public hearing organised by the Senate Joint Committees on National Planning, Economic Affairs and Poverty Alleviation and Finance on review of national planning and budgeting process in Nigeria.

Mrs Okonjo-Iweala maintained that the Nigeria’s economy was public sector-driven and, as such, it would be disingenuous to remove the Budget Office from the Finance Ministry because people watch and monitor every item in the budget.

What was in operation in Nigeria, she said, was unlike what obtained in the United States of America (USA), where the economy was private sector-driven and, therefore, it would make more sense that the Budget Office was embedded in the structure of the economy as a macro-economic policy. 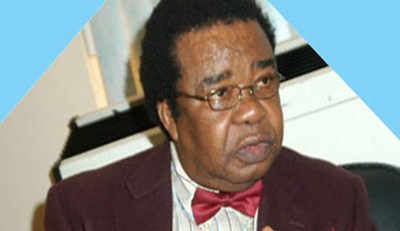 About $500 billion had been lost to corruption in the country from 1960 till date. This was the submission of former Minister of External Affairs, Professor Bolaji Akinyemi during the one day Minna National Discourse on corruption.

According to the former envoy, the raising insecurity in some parts of the north, the militancy in the south- south and the kidnapping for ransom in the south-east are all the consequences of the high level of corruption that has rocked the nation for many years.

The Governor of Central Bank of Nigeria (CBN), Mallam Sanusi Lamido, who chaired the event, told the gathering that contrary to the wide held belief, corruption is not the greatest problem confronting the country but the lack of general framework for accountability in all sphere of our national life.

Also speaking at the event the Minister and deputy chairman National Planning Commission, Shamsudeen Usman noted that until the issue of corruption is tackled headlong the nation’s Vision 202020 would just be a mirage.

Also speaking the Governor of Rivers state and chairman, Nigeria Governors Forum, Chibuke Amaechi blamed the high level of insecurity in the country to the corruption of the ruling class.

While for the Governor of Niger state, Muazu Aliyu, corruption arises because there is surplus money available to politicians.

The inaugural Minna National Discourse on Corruption has as its theme; Confronting Trends Of Indiscipline, Corruption and Disregard For Rules and Regulations in Nigeria.

The discourse held in Minna, the Niger state capital. 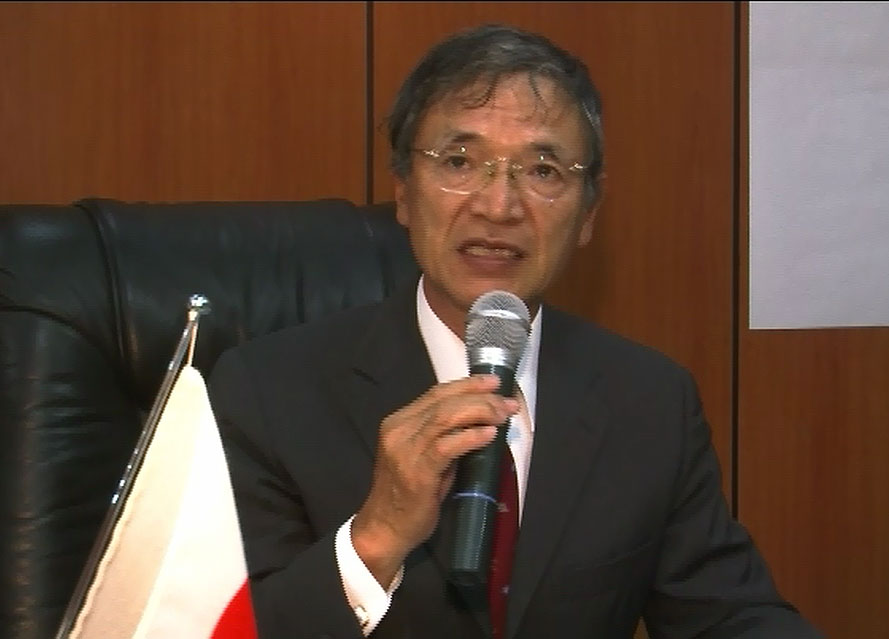 Nigeria and Japan have signed an agreement of N600 million for the provision of wheel chairs and walking support for people with disability in the country.

Speaking during the signing ceremony in Abuja, the Japanese ambassador to Nigeria, Ryuichi Shoji said the donation is to cover the thirty six states of the federation and federal capital territory.

On his part, the minister of National planning, Shamsudeen Usman said that the gesture will assist over 16.7million Nigerians living with one form of disability or the other. 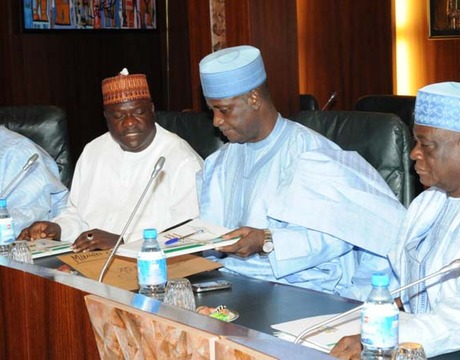 The National Economic Council (NEC) on Wednesday urged Federal and states government to continue the peace talk on the excess crude oil account, which has been source of acrimony between the two parties.

The governors had after its meeting on Wednesday decided to head back to the Supreme Court to enforce the Federal Government’s adherence to the constitution.

The Council met on Thursday to discuss various issues concerning the economy. Vice President Namadi Sambo is the statutory chairman of the council which also comprises of governors of the 36 states of the federation, governor of the Central Bank of Nigeria, minister of National Planning, the Attorney General of the federation and minister of Justice, minister of state, finance.

Briefing State House Correspondents at the end of this week’s meeting, the Kwara State governor, Abdulfatah Ahmed said the council encouraged both parties to continue the consultations towards working out an amicable solution.

“After considering a report by the Committee on the out-of-court settlement on the excess crude account litigation on the extent of the ongoing negotiations between the Federal and state governments, NEC encouraged the counsels of both parties to continue the consultations towards working out an amicable solution,” he said.


Mr Ahmed who was accompanied to the briefing by his Gombe State counterpart, Ibrahim Dankwambo and the Minister of National Planning, Shamsuddeen Usman, however said the council’s position was advisory. 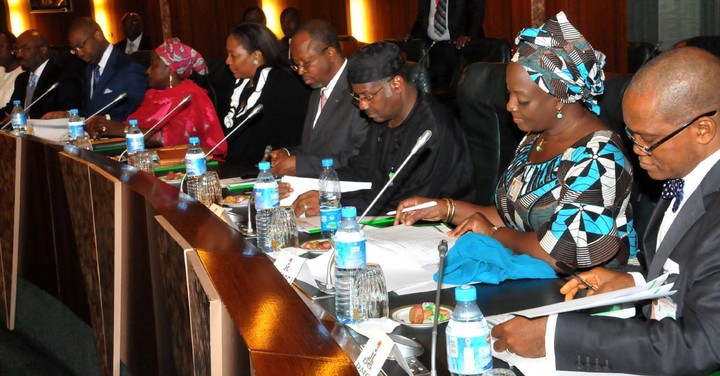 The move by the governor of the Central Bank of Nigeria (CBN), Sanusi Lamido Sanusi to introduce N5, 000 notes as legal tender in Nigeria may have received the endorsement of the Economic Management Team.

After its weekly sitting presided over by President Goodluck Jonathan some of the members of the team who spoke to state house correspondents said that the move was in the right direction and remains the prerogative of the CBN.

The Minister of National Planning, Shamsudeen Usman, who was the first to speak after the meeting, said that the CBN merely proposed the introduction of the N5000; the president approved it while the economic management bteam endorsed.

“Obviously, the discussion today was basically to endorse. Mr. President had already approved; that is the only requirement by law. The CBN is to propose and Mr. President is to approve. And since Mr. President has approved, really what is important is to just explain. I personally had some concerns about the coins but since some discussion with the CBN governor, he has actually clarified that even the media didn’t get it”, Mr Usman said.

Arguing that the N5000 note, unlike some people were misrepresenting it, was not going to lead to higher inflation, Mr Usman also hinted that CBN was going to communicate to Nigerians that the coins will run concurrently with the naira notes they are replacing as a form of test-run for Nigerians to accept them first.

“The coins are being introduced on an introductory basis so that if people accept them and are using them, then gradually they will withdraw the other notes but they will run concurrently with the notes. Those were my concerns initially because you remember during my time in the CBN; we introduced the one naira and two naira coins. Unfortunately, they were not utilized at all. Part of that is really the value of one naira and two naira today. What can you buy?”

On the contention that there is a link between the N5000 note and corruption, he said, “It is an area that I obviously know nothing about. I think people alleged that part of that corruption is being done in dollars. A $100 bill is N16, 000 and N5000 note will be $30. So, which one is bigger to carry if you are doing corruption?

“So, I don’t think it is necessarily going to increase the level of corruption. Those doing corruption will probably find that too small. $100 bill is still bigger than the N5,000 note”, the minister added.

Also speaking, some members of the team from the private sector including Peterside Atedo, business mogul Aliko Dangote and Aigboje Aig-Imoukhuede said the introduction of the N5,000 notes has nothing to do with inflation.

On his part, the governor of Anambra State, Peter Obi said that what Nigerians should concern themselves with is how to increase improvement in manufacturing and agriculture.

The Minister of National Planning, Dr. Shamsudeen Usman has inaugurated a committee to review the first National Implementation Plan which is geared at assessing the attainment of the federal government’s Vision 2020.

Speaking with journalists after the inauguration in Abuja, Dr. Shamsudeen said that the plan is expected to provide policies, programmes and projects to the private sector, federal and state governments.

He said that the macroeconomic target of the first phase of the plan has a gross domestic target of $300 billion, per capita G.D.P of $2008 and a projected investment of 32 trillion.

Chairman of the committee, Mister Moses Akpobasah promised to provide Nigerians full details of the assessment of the plan.

The European Union Delegation to Nigeria has made public its commitment to finance three projects valued at 98 million Euro (approximately N20 billion) to support the justice, anti-corruption and drugs sectors in Nigeria.

The projects will be implemented by the United Nations Office on Drugs and Crime (UNODC.)

UNODC, which is a global leader in the war against illicit drugs and transnational organised crime, is also committed to achieving health care delivery, security and justice by tackling global threats and by delivering legal and technical assistance to prevent terrorism.

The commitment by the union was made known when the National Planning Commission hosted heads of foreign agencies at a high level project briefing session in Abuja.

The session provided opportunity for UNODC to present the recommendations by stakeholders at the pre-implementation workshops for the three projects.

At the event, a 35 million Euro (approximately N7.2 billion) financing agreement was signed by the Federal Government and the European Union (EU) in support of  government’s efforts in preventing and fighting corruption.

The agreement was signed by the Minister of National Planning, Dr Shamsuddeen Usman and the Head of the European Union Delegation to Nigeria, Dr David MacRae, on behalf of the government and EU.

In his remarks, Dr Usman noted that the projects, which would be implemented by UNODC, were a continuation of the ninth European Development Fund that supported the Economic and Financial Crimes Commission (EFCC) and the judiciary.

He disclosed that the beneficiaries of the projects include  the Bureau of Public Procurement, Code of Conduct Bureau/Code of Conduct Tribunal, Public Complaints Commission and EFCC.

Others are the National Financial Intelligence Unit, Special Control Unit Against Money Laundering, Technical Unit on Governance and Anti-corruption Reforms as well as civil society organisations.

According to him, the overall objective of the three projects is to promote good governance and contribute to Nigeria’s efforts in enhancing transparency, accountability and combating corruption while also contributing to the reform of the justice sector and addressing drug related issues.