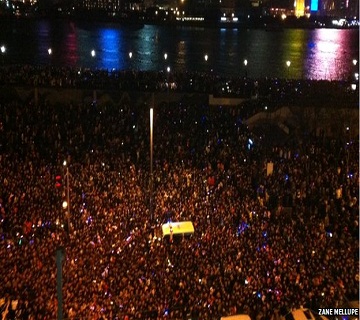 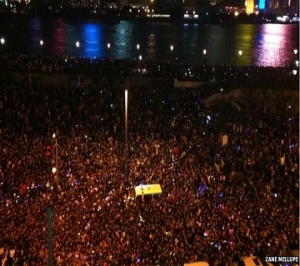 According to the authorities the stampede was possibly caused by people rushing to pick up fake money thrown from a building overlooking the city’s famous Bund waterfront district.

The government in China’s gleaming business capital said large crowds started to stampede in Chen Yi Square on the Bund just before midnight in the cosmopolitan city’s worst disaster since 58 died in an apartment building fire in 2010.

Many of the dead are believed to be students, with 25 of them women, state media report.

A man who brought one of the 47 injured to hospital for treatment said fake money had been thrown down from a bar above the street as part of the New Year’s Eve celebrations. People rushed to pick up the coupons, triggering the stampede, said the man, who gave his family name as Wu.

Jenny Chan, 24, visiting from Hong Kong for New Year at Chenyi Square on the Bund, told Al Jazeera: “I was heading up to the viewing platform in order to see the light show. But there were so many people, I couldn’t put my feet down on the steps.

People behind me kept pushing. I could hardly move and I felt as though I was dangling in mid air.

“It was very crowded. I almost couldn’t breathe and I heard someone behind me call for her help, and someone scream. It was a total mess. Someone pulled my hair. I think they were trying not to fall down.

“Someone brought out a loudspeaker and tried to maintain the order. On the ground I could see blood and bodies, and some people’s faces were covered in bruises.

“I’ve never felt so near death.”

Cui Tingting, 27, said she had picked up some of the bank notes but had thrown them away when she realised they were fake.

“It’s too cruel. People in front of us had already fallen to the floor, and others were stepping all over them,” she said.

State television cited others as saying the fake bills came fluttering down “like snow”.

Dozens of people gathered at the scene of the stampede Thursday, laying bouquets of flowers on the ground. Police cars lined an intersection near where the deadly chaos took place.

President Xi Jinping has asked the Shanghai government to get to the bottom of the incident as soon as possible, and ordered governments across the country to ensure a similar disaster could not happen again, state television said.

The Shanghai government said on its official microblog that an inquiry had begun, and that all other New Year events had been canceled.

Photographs on Weibo, the Chinese version of Twitter, showed densely packed crowds of revelers along the Bund where buildings from Shanghai’s pre-communist heyday face the Huangpu River and house upscale restaurants, bars, shops and hotels.

In 2004, 37 people died in a stampede in northern Beijing, on a bridge at a scenic spot, during the Lunar New Year holiday. 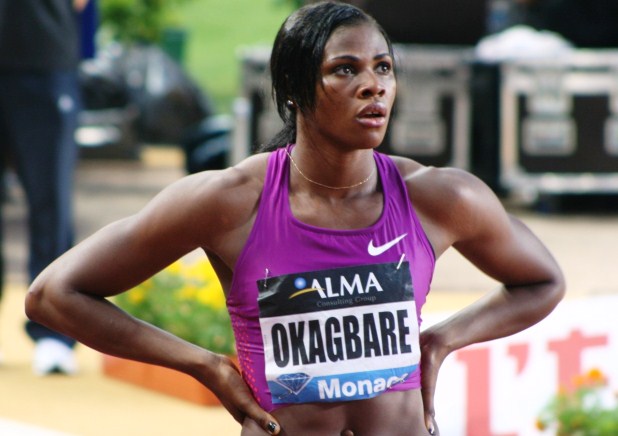 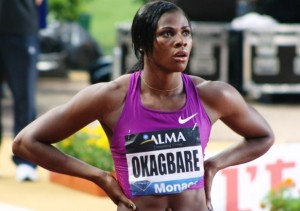 Nigeria’s Blessing Okagbare produced two meet records on her way to victory in the women’s Long Jump and 200 metres at the IAAF Diamond League meeting in Shanghai, China on Sunday.

Okagbare needed only three attempts to claiming the title of women’s long jump with a winning mark of 6.86 meters from her first jump, beating the former meet record of 6.73m set by Janay Deloach Soukup of the United States in 2012.

The reigning African champion and world silver medalist, took the Long Jump with a leap of 6.86m (+0.1) in round 1 ahead of national record-breaking Ivana Spanovic of Serbia (6.85m, +0.3) to move second on the 2014 world list.

Moments later, in the 200 metres race, the Nigerian who skipped her last three jump attempts to rest, made it two from two in Shanghai with another meet record of 22.36 seconds just five hundredths outside her personal best. The 25-year-old was in blistering form.

Two-time world junior champion, Bahamas Anthonique Strachan, finished second in 22.50, seconds ahead of Kimberlyn Duncan of the United States (22.96) in third while the former World and Olympic champion, Jamaica’s Veronica Campbell-Brown was fifth in 23.08. 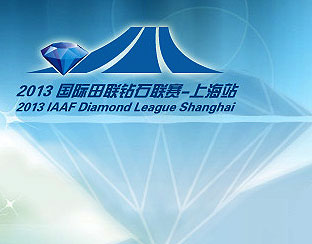 Top athletes expected to be competing with each other in the Diamond League meet holding in Shanghai this weekend are in high spirits as they gear up to outdo one another.

America’s 110-metre hurdles world record holder, Aries Merritt, said that he would try his best to compete and hope not to fail his fans in Shanghai for the second leg of the 2013 Diamond League series on Saturday.

The Athlete who won gold in the event at last year’s London Olympics said he hoped that he would be at his best come Saturday after he just regained fitness  as he picked up an injury in the indoor season.

“Every time I’m doing a rep, whether it’s sprinting or jogging, anything that has to do with having the leg in front, I just put that leg in front from now on. So I practice when I’m running repeat one fifties, I just put my weaker leg in front to start and it’s just something I’ve just been doing. I’m also doing a series of drills that allows me to balance out both sides,” he said referring to his injured leg.

Meanwhile, Silver medallist in London 2012, Jason Richardson, who is a fellow American has taken up serious discussions with his trainer and coach, John Smith, to see what and how he can challenge Merritt’s world record time of 12.80 which was set in Brussels last September.

“John Smith and I actually had plenty of conversations about where we think the record could go and we’ve actually discussed that it could go further than 12.80. So our approach has actually stayed the same, which is to always have a foundation of change,” he said.

Olympic 100-metre champion in 2012, Shelly-Ann Fraser-Pryce, said that she looked forward to racing against Carmelita Jeter, who took silver in London, on Saturday.

Jamaica’s Fraser-Pryce proved to be the sprint queen of the track when she retained her Olympic 100-meters title in London last year.

Fraser-Pryce was little known when she stormed to gold in 2008, but followed up a year later by winning the world title in Berlin. 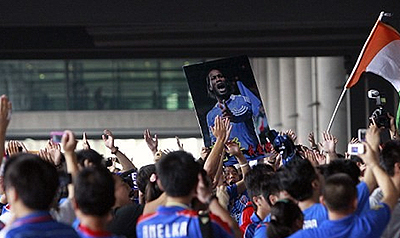 The powerful Ivory Coast striker and former Chelsea striker now has a new nickname ‘Devil Beast’. This is accrued to his  success within a month of signing for his new Chinese club, Shenhua Shanghai.

He is no doubt the best thing that has happened to Shenhua, then before his arrival the club was 12th position in the 16-team Super League, proving his worth as the world’s highest paid players in the game as he scored twice on his home debut in the 5-1 thrashing of long-time rivals Hangzhou Greentown.

The fanatical home crowd, swelled from the usual 15,000 to 25,000, chanted the veteran’s name repeatedly and gave him a rousing cheer as he performed the traditional post-match bow.

Although Chinese teams have been luring a fast-expanding group of foreign stars to play for enormous salaries, Drogba is the highest paid and has quickly become a fan favourite, eclipsing Anelka.

Drogba has had only a negligible effect on his team so far. He has not found the net since his double and Shenhua are still struggling, creeping up to 10th in the table.

Not that the fans are laying any blame on their new hero, who is on international duty for his country Ivory Coast against Russia on Wednesday in a friendly in Moscow. 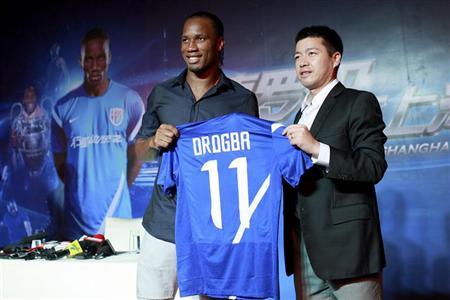 It is not money but the big challenge in an unfamiliar land that lured Didier Drogba to China, the Ivory Coast striker said on Saturday.

More than 300 fans gathered at the Shanghai airport to welcome Drogba on his much-anticipated arrival to join Chinese Super League strugglers Shanghai Shenhua.

Drogba has signed a two-and-a-half-year contract with the big-spending club for a reported salary of $300,000 a week, ending weeks of speculation on his future after he announced his decision to leave Champions League winners Chelsea.

“I decided to come here because when the club and the president approached me, I looked at the project and it came with ambitious ideas and he wants to … help football develop in China,” Drogba told reporters after his unveiling.

“I know China is a great sports country so for me it was also a big challenge because it could have been easy for me to stay in Europe and go to another team, another big team.

“Really, I didn’t come here with the idea of making a lot of money. I come here because it is a completely different challenge from what I have seen in Europe before.

“And that’s the idea, there are many challenges but this one is a big one.”

Drogba’s arrival is the latest in a long list of high-profile names who have made the move to China in recent months.

Drogba, who scored 157 times in 341 appearances for Chelsea making him the club’s fourth all-time leading scorer, is the biggest catch of them all.

“The results of my new team, they are not so good, not so great. But you know, the second part of the season just started and I think we have time to make some better results and to bring the club to a better place,” Drogba said.

“With my team mates, we are going to perform as much as we can. And I came here to win the league, I am not coming here as the beginning of the retirement or something like this.

“I want people to make sure and to understand that I am here to win. I am not here to sit and relax.”

The fans arrived in the early hours of the morning at the Shanghai Pudong International Airport, many dressed in the club’s blue jersey bearing “Drogba 11”, and their hopes were also pinned on the Drogba-Anelka strike force.

“I believe that with his arrival, our results will improve significantly, because he has a good rapport with Anelka,” 23-year-old Zhu Hongbo said.

“Also, we have brought in a midfield player in (Giovanni) Moreno. I think for the second half of the year, our results will improve and we can be in the top three.”

Apple Inc’s trademark battle will on Wednesday move to Shanghai, China following a Shanghai court deliberation on Proview’s request to halt the sale of iPads across the city.

Proview Technology (Shenzhen) claims it owns the iPad trademark in China and a Shenzhen court ruled in its favor last December. Proview has since launched a multi-pronged approach to get Apple’s iPads off the shelves with mixed success.

Apple’s iPad has a huge lead over rival tablet PCs in China with a 76 percent share. But it’s not only the consumer market in China that is important for Apple because the country is also a major production base for the iPad and other Apple products.

Indeed, Proview Technology has already petitioned Chinese customs to stop shipments of the iPad in and out of China, however, authorities have indicated such a ban would be difficult to impose.

Previous court rulings have covered specific retailers in smaller cities, but a Shanghai order, if imposed, would eat into one of Apple’s biggest markets in China, which is home to three of its five flagship stores in China.

Apple disputes Proview’s ownership of the trademark, saying it bought the trademark from Proview in 2009. The firm has appealed the Shenzhen judgment with a higher court hearing set for Feb 29 in China’s southern province of Guangdong.

Apple’s Shanghai unit is the defendant in the case due to be heard on Wednesday. Losing could mean the city’s three Apple retail stores would have to stop selling the

popular tablet PCs. Apple has two other flagship stores in China, both in Beijing.

Over the past week, Proview’s efforts have borne fruit as local media reported that certain cities have started enforcing Proview’s request to remove the iPads.

Proview’s lawyers said on Friday it had won a lawsuit in the southern city of Huizhou against a retailer selling Apple’s iPads, not boding well for its case in Shanghai.