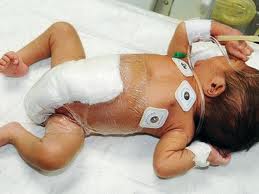 Doctors at the National Institute of Child Health (NICH), Karachi, have successfully operated on the Pakistan baby born with six legs.

“A team of five experienced doctors have successfully separated the extra legs and limbs from the baby today (Thursday). He is very much safe and secure…the doctors are examining the infant to plan for necessary treatment to…ensure he lives a normal life,”  the director of NICH, Jamal Raza said.

The baby’s father,  Imran Shaikh,  who lives in Sukkur, says he is grateful that his son has being treated. “We are a poor family. I am thankful to the government for helping us treating my baby,” he told the media. Imran Sheikh also asked well-wishers to pray for the complete and early recovery of his son from the disease.

Meanwhile, the Prominent gynecologist and President Pakistan Medical Association Dr Samrina Hashmi has said the abnormality in the baby could be because of several factors, including improper medicines taken by the pregnant mother and contaminated water.

“In every 10,000 child births one baby is born with an abnormality such as a hole in the heart,” she said. “Then there is a possibility that several eggs were fertilised instead of one,” she said.

A baby born with six legs due to a rare genetic condition, is struggling to survive at a Pakistani hospital, as doctors search for surgical options that would allow him to live a normal life.

‘Operating on such a baby is not an easy task as proper assessments need to be done first,’ he said. ‘We need to figure out whether the baby has his twin’s limbs or his own. We also need to consider how much the internal organs have developed as the latter could complicate matters and decrease the baby’s chances of surviving.’ Raza said

A parasitic twin is sometimes referred to as an asymmetrical or unequal conjoined twin.

It occurs when a twin embryo begins developing in utero, but the pair does not fully separate.

One embryo continues developing at the expense of the other (the parasitic) which will rely on the body of the other for blood supply and organ function.

It is incompletely developed and dependent on the other twin.

The independent twin is called the autosite.

Meanwhile, the boy’s father, an X-ray technician, Imran Shaikh, is appealing to the Pakistani government and charities to help pay for his son’s surgery. ”I can’t afford to visit Karachi and get treatment for my baby…I only earn $66-a-month…I appeal to philanthropists and the government to come forward for the treatment.”