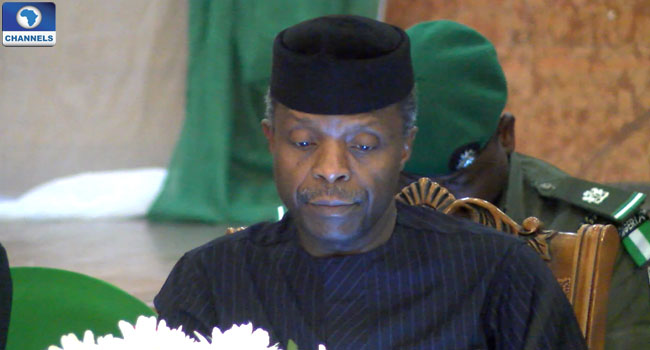 The Nigerian government has reassured local manufacturers, business owners and foreign investors that the present administration remains focused on improving the business environment.

It expresses strong belief that such environment will accelerate Nigeria’s economic growth and job creation through active private sector participation in the economy.

Vice President Yemi Osinbajo gave the assurance at a forum on Job Creation, Skills and Employment at the ongoing 22nd Nigerian Economic Summit in Abuja.

Professor Osinbajo said that the present administration was seriously tackling issues relating to local production, employment generation and all that would be needed to re-energise the economy that is in recession.

“We are engaging every one of our agencies that are responsible for facilitating trade, facilitating business, they have to be up to scratch, they’ve got to encourage business. It is our business to make sure that we promote enterprise because the way to create employment is not by direct employment by government, it is by private sector being encouraged to create these opportunities, so that is our focus.

“I want to assure everyone that the government is very focused on improving the environment for doing business, increase the opportunities so that we can employ the vast majority of our young people who need employment, encourage big businesses, encourage small businesses, encourage cottage industries, that is our focus and it will remain our focus,” the Vice President stated.

A spokesman for the Vice President, Laolu Akande, said Professor Osinbajo pointed out that though there might be challenges with the present duty waivers and tax regimes, the Federal Government was working hard to correct the wrongs with the view to encouraging the growth of small businesses and attracting foreign investments.

The Vice President said government’s emphasis on agriculture and agro-businesses was premised on its agenda on diversification and self-reliance in food production for domestic consumption.

Professor Osinbajo said the enormity of the challenge with tax holidays and waivers could not be addressed by a ‘one size, fits-all’ tax holidays initiative, stressing that there were areas that the government would revisit and revise.

He said the Presidential Enabling Business Council, a special initiative of the Federal Government established by the President, in collaboration with the private sector, was looking at incentives and issues related to waivers.

The Vice President, who had spoken extensively on the administration’s economic policies on Day 1 of the Nigerian Economic Summit, also emphasised what government was doing to support funding of small businesses.

“There are complications around funding and that is why in the short term, intervention funds are what we think might work.

“We are looking at intervention funds in agriculture. We have the Anchor Borrowers’ Programme. We are resuscitating the Bank of Agriculture, and recapitalising it.

“We expect that the Bank of Agriculture and a few other banks will be able to provide some cheap funds for agriculture, we are already seeing that in the anchor borrowers’ programme.

“We also think that intervention fund in setting up areas like health, before we are able to get the overall monetary environment right, is necessary,” the Vice President told the gathering.

Earlier at the opening of the summit on Monday, President Muhammadu Buhari said Nigeria had no other choice at the moment than to diversify its economy to break its reliance on oil.

He said: “I am so delighted that you have chosen as your theme Made-in-Nigeria, which lies at the heart of so many of the efforts we are making to lead us through these troubled times and to lay a firm foundation for the future.

“We need to diversify the economy so that we never again have to rely on one commodity to survive as a country, so that we can produce the food we eat, make our own textiles, produce most of the things we use and create the right environment for our young people to be able to innovate and create jobs through technology”.

The President added that there was apparently no other way to steer Nigeria out of its present economic predicament without building a strong economic foundation on Made-in-Nigeria goods and services.