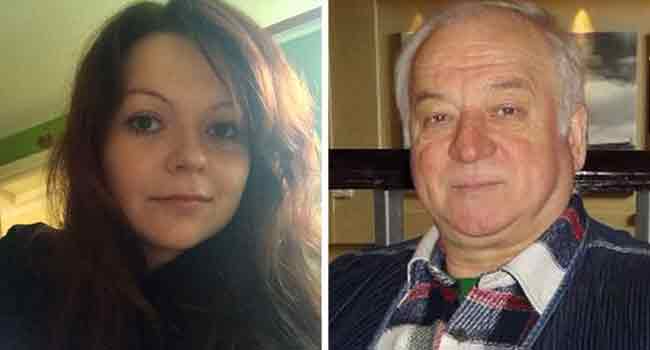 The European Union imposed chemical weapons sanctions on nine Russian and Syrian officials on Monday including the chief of the GRU military intelligence agency.

The EU said the Russians, two agents and the head and the deputy head of the GRU, were responsible for “possession, transport and use” of the nerve agent used in the attack in Salisbury, England last March.

The United States said Tuesday it was preparing more sanctions against Moscow over the attempted assassination in Britain of a former spy after a previous round sowed chaos on Russian markets.

Three months after the United States declared that Russia violated a US law that seeks the elimination of chemical and biological weapons, the State Department told Congress in a legally-mandated follow-up that Moscow had not come into compliance.

“We intend to proceed in accordance with the terms of the (Chemical and Biological Weapons) Act, which directs the implementation of additional sanctions,” State Department spokeswoman Heather Nauert said in a statement.

She said the State Department was in discussions with Congress, which has led the push to punish Russia, to determine the exact measures.

British investigators said Russian operatives on March 4 tried to kill Sergei Skripal, a former intelligence officer and double agent, and his daughter Yulia Skripal in the English city of Salisbury.

The attack involved Novichok, a military-grade nerve agent developed by the Soviet Union during the Cold War. The two Russians survived but a third person died after exposure.

Under the US law, the State Department must slap further sanctions three months after its initial determination unless a country proves it has reversed course on chemical and biological weapons, for example by inviting in international inspectors.

Russia has denied involvement in the Salisbury attacks and has promised reciprocal measures to all US sanctions.

Prime Minister Dmitry Medvedev warned in August that any imposition of further sanctions would constitute a “declaration of economic war.”

The Kremlin said new sanctions would be illegal and that Russia would respond with similar measures.

And in comments, after Democrats seized control of the lower house of the US Congress in Tuesday’s midterm elections, Russia said it did not foresee bilateral ties improving any time soon.

“Rosy prospects for the normalisation of Russian-US ties are not visible on the horizon,” President Vladimir Putin’s spokesman Dmitry Peskov told reporters. He insisted, however, that Russia still wanted dialogue with the US.

Lawmakers across the political spectrum have urged a strong response to Russia, despite President Donald Trump’s avowed affinity for Putin.

“No one should be surprised that Vladimir Putin refuses to swear off the future use of weapons-grade nerve agents,” Royce said in a statement.

“It is unacceptable that the administration lacks a plan — or even a timeline — for action on the second round of mandatory sanctions required by US law,” he added.

The first round of sanctions banned exports to Russia of arms and other products with national security applications and froze any US government credit guarantees to Russia.

The sanctions announcement in August sent Russian stocks plunging and the ruble fell to its lowest level against the dollar in nearly two years.

The drop came even though the direct effects of the initial sanctions were limited, as Russia — the major rival to the United States as an arms exporter — does not buy US weapons.

The State Department also made a number of exemptions in the sanctions, such as continuing military trade to allow space cooperation with Russia including commercial launches.

Russia had already been under sanctions since 2014 over its military meddling in Ukraine.

Trump has cited sanctions as proof that he is tough on Russia but has voiced misgivings about punishing Moscow and accused political enemies of waging a “witch hunt” to prove he colluded with Russia in the 2016 election.

Last month, US prosecutors also indicted seven Russian agents over hacking operations after The Netherlands said that spies had obtained access to the world’s chemical weapons watchdog, which is based in The Hague.

Russian President Vladimir Putin on Wednesday called former spy Sergei Skripal “a traitor to the homeland”, admitting Moscow knew he had cooperated with foreign intelligence upon his release in a 2010 spy swap.

“He is just a scumbag,” Putin told an energy forum in Moscow, referring to the Russian ex-spy who Britain says was poisoned with a Soviet-designed nerve agent by members of Russia’s military intelligence. “He is just a spy, a traitor to the homeland.”

“He was caught, he was punished, he spent five years in prison, we let him go, he left and continued cooperating with, providing consultations to (foreign) security services.” 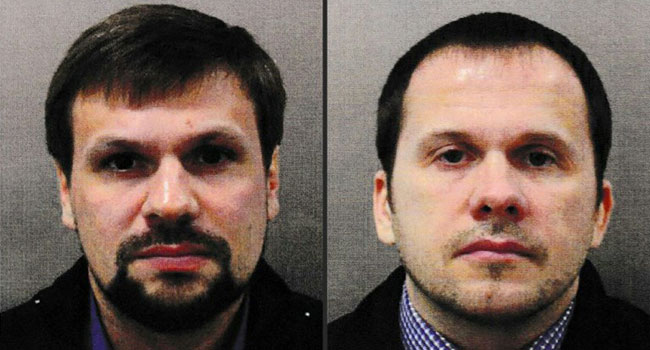 Speaking with the head of the Kremlin-backed RT news network, the pair confirmed they were the men whose pictures British authorities released this month, but insisted they were visiting the English city of Salisbury as tourists.

British security services had named the men as Alexander Petrov and Ruslan Boshirov, but said these were likely to be aliases.

In a 25-minute interview, the men said these were their real names but insisted they did not work for Russia’s GRU military intelligence agency, as Britain claims.

RT said the men sounded distressed and were sweating as they spoke.

Both appeared to be about 40 years old, and they wore almost identical dark blue jumpers. The men looked well-built and Boshirov wore what looked like a red Kabbalah bracelet.

The TV station recorded the interview on Wednesday evening, just hours after President Vladimir Putin said Russia had identified the men sought by Britain and urged the pair to address the media.

“They are civilians,” Putin said, adding there was nothing criminal about them.

The United States is planning a new set of “very severe” sanctions on Russia over its alleged use of the Novichok nerve agent in the March 4 poisoning of Skripal and his daughter Yulia, Assistant Secretary of State Manisha Singh told a congressional hearing Thursday.

She said Russia had until November to allow on-site inspections of facilities linked to the potent poison, and to provide “verifiable” assurances that Novichok will not be used again.

The Skripal assassination attempt has drawn comparisons with the poisoning of Kremlin critic Alexander Litvinenko with highly radioactive polonium in London in 2006.

Moscow has refused to extradite the two men Britain suspects of killing Litvinenko. One of them, Andrei Lugovoi, went on to become a Russian lawmaker.

Downing Street on Thursday called the RT interview “an insult to the public’s intelligence”.

“More importantly they are deeply offensive to the victims and loved ones of this horrific attack. Sadly, it’s what we’ve come to expect,” Prime Minister Theresa May’s spokesman said.

Skripal and his daughter survived, but a British couple, Dawn Sturgess and Charlie Rowley, came into contact with the same nerve agent in a town near Salisbury months later. Sturgess died.

Petrov and Boshirov said they arrived in Britain on March 2 and travelled to Salisbury the next day to see the sights.

They left after no more than an hour because of poor weather and heavy snow, but returned to the city the next day — March 4, the day of the attack.

British authorities said the suspects travelled to Salisbury twice to prepare for the attack and then carry it out.

“Friends have been telling us for a long time we should visit this beautiful city,” said the broad-shouldered Petrov.

“We went there to see Stonehenge, Old Sarum, but we couldn’t do it because there was muddy slush everywhere,” he added, referring to famous local landmarks.

Boshirov, sporting a goatee, denied the pair knew anything about Skripal or the location of his house.

“We walked around and enjoyed this English Gothic architecture,” he said.

British investigators say the poison was transported in a fake Nina Ricci perfume bottle and sprayed onto the handle of Skripal’s front door.

“Is it not silly for decent lads to have women’s perfume?” Boshirov asked. “The customs are checking everything. We didn’t have it.”

The pair said they had previously travelled to Europe for business and pleasure.

The men complained their lives had become a “nightmare” and urged journalists to leave them alone.

“We’re afraid of going out, we fear for ourselves, our lives and lives of our loved ones,” Boshirov said. “We are tired.”

When RT editor Margarita Simonyan asked them why they travelled together, implying they might be a gay couple, the men said their private lives were off limits.

“This is not an interrogation,” Boshirov said.

Simonyan said the men had contacted her on her cellphone.

Boshirov and Petrov said they called her because they needed protection and would like an apology from Britain.

“If these two suspects are prepared to answer questions on Russian television, let them come here and answer some more searching questions about what we know they did,” he told AFP.

Social networks ran amok, with many deriding what the duo said as a flimsy attempt to cover their tracks.

“The Spy Who Went Home Because It Was Cold,” quipped Twitter user Ben Stanley.

Others suggested that Moscow had essentially thrown its intelligence agents under the bus.

“Unlike the murderers of Litvinenko,” wrote Anders Aslund, a senior fellow at the US think-tank Atlantic Council, “these two men are sent through the meat grinders”.

“How can the GRU allow their obedient officers to be ridiculed like this?” he added. 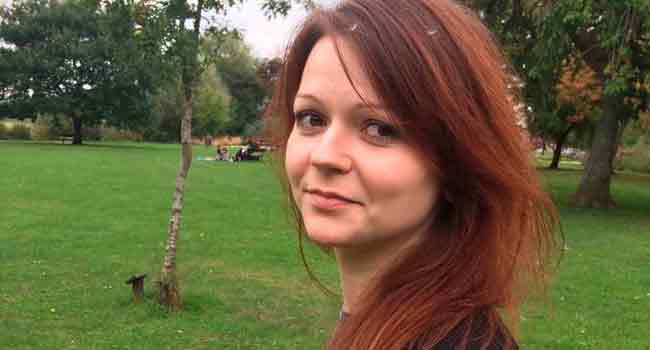 Diplomats Wednesday were holding emergency talks on the poisoning of a former Russian spy after the global chemical arms watchdog confirmed British findings that he was the victim of a nerve agent attack.

Diplomatic sources said the closed-door meeting of the Organisation for the Prohibition of Chemical Weapons (OPCW) in The Hague had begun. It was called by Britain after OPCW experts agreed that former Russian double agent Sergei Skripal had been poisoned with a nerve agent last month in the British town of Salisbury.