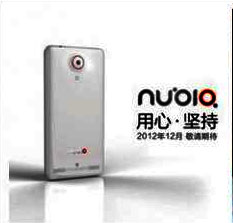 ZTE has announced a new mobile phone brand, dubbed Nubia, but details of the new ware is still very unclear becoming a bit mysterious, As it is not clear what platform the devices launched under the brand will be running.

Smartphones this days, roll out all the package before launch date but the brand dropped no hints on the platforms either Android or Windows Phone, or indeed any other operating system, but it may however, that it’s probably a new Android brand.

Already the company has produced a phone called the Nubia Z5, which will have a 5-inch display, a quad core processor and a 13-megapixel camera, while the exterior is of ‘Italian design’, apparently.

ZTE’s Nubia 5 does look like a reasonably attractive handset and at the very least we can discern it’ll be available in white.

Reports indicate that this new range will be aimed at the European market before it roves round some other markets in the continent and it’s being pegged as a ‘high-end’ premium range.