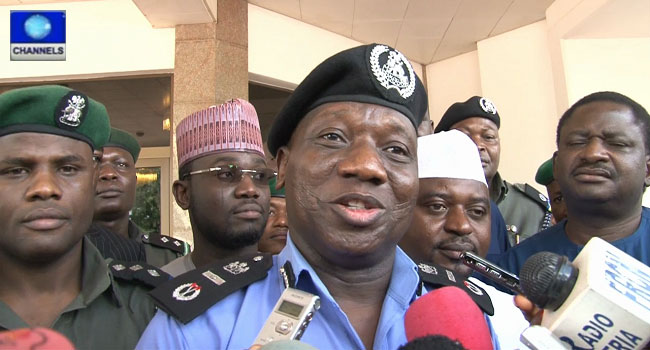 The Nigeria Police Force says it will sanction officials engaging in brutality and unprofessional misconducts in the discharge of their duties.

This warning was issued by the Police Commissioner of the the Ekiti State Command, Mr Wilson Inalegwu.

He said the cases of brutality had become an intolerable albatross of the Force, promising that it would be tackled to restore dignity in the nation’s policing system.

As part of efforts to address the trend, the police on Monday flagged off Public complains Rapid Response Unit in the state to collate complaints from the public.

Mr Inalegwu threatened that any police found culpable of professional misconduct by way of incivility or mishandling of weapons would be dismissed and prosecuted in line with the directive of the Inspector General of Police, Mr Ibrahim Idris.

At the flag off ceremony held at the Okesa Police station in Ado Ekiti, Mr Inalegwu, disclosed that the unit was established to offer 24 hours services to the public by way of receiving complaints about public mis-demeanour of his men in their dealings with the citizens.

“The Public Complaint Rapid Response Unit is saddled with the responsibility of receiving and resolving complaints of police professional misconduct emanating from policing activities and operations .

“We have a way of dealing with misconduct in the police. The Commissioners of police can decide cases involving rank and file while the police Service Commission can deal with those from Assistant Superintendent of Police to the topmost officer.

“Whichever way it happens, professional misconduct won’t be tolerated. We won’t tolerate senseless killings of innocent Nigerians or misuse of firearms and any officer engaging in such will be investigated and will be dismissed and prosecuted if found guilty,” he stressed.

On the mode of operation of the unit, the Police Commissioner said: “The unit is available 24 hours a day to listen to members of the public from across the state. In line with the change agenda of the Federal Government and the change Begins with me campaign of the police Force.

“The unit has provided seven different platforms which are inscribed on the flyers through which the public can reach the unit- phone calls, SMS, Whatsapp, blackberry Messenger, Twitter, Facebook and e-mail.

“It would be recalled that on assumption of duty, IGP Idris promised Nigerians that the police Force will be repositioned to be more accountable, responsive, responsible and reliable”.

Mr Inalegwu added that the police would continue to make themselves accessible to the public and regain the confidence and reemphasize the ‘police is your friend’ mantra of the force.

“The police force must be responsible and responsive and we must gain public confidence so that the people can cooperate, appreciate and support the police throughout the state in carrying out their constitutional duties and other tasks associated with protection of lives and property,” he emphasised. 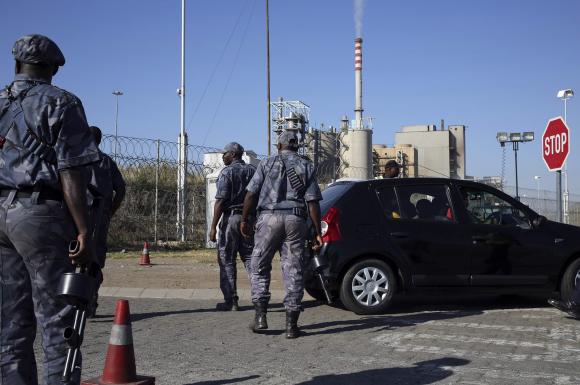 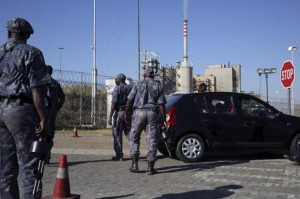 South Africa sent more police to the strike-hit platinum belt on Tuesday to protect miners returning to work this week as producers pushed ahead with plans to end the sector’s longest and most costly bout of industrial action.

Police spokesman in the platinum mining town of Rustenburg northwest of Johannesburg, Thulani Ngubane, said that Police had set up park-and-ride facilities around the platinum mines to handle the arrivals.

It is unclear how many workers would be coming back but the three big platinum firms say a majority of the 70,000 strikers they have contacted directly want to end the strike.

“We are prepared for any eventuality,” Ngubane said, although he acknowledged it would be difficult to provide security for the miners in the shanty towns that ring the main mines. Four miners have been killed in the area over the last three days.

Shop stewards of the striking Association of Mineworkers and Construction Union (AMCU) told Reuters that Police had also broken up an illegal march by union members at Marikana.

AMCU members have been on strike at Anglo American Platinum, Impala Platinum and Lonmin since January pressing for higher wages but talks have gone nowhere.

Lonmin has said that it expects more miners to start returning to work on Wednesday after it made its wage offer directly to employees, sidestepping AMCU.

Implats was still conducting an SMS vote on its offer, which was expected to be concluded on Tuesday, and Amplats also said a majority of its workers wanted to return to work.

“The main reason they are not coming to work is because they are being intimidated,” Amplats spokeswoman, Mpumi Sithole said.

The firm had provided bus vouchers to its employees in the Eastern Cape province, where many miners have their homes, to return to Rustenburg and most of them had gone back, she added.

The producers say the strike has so far cost them 17 billion Rand ($1.64 billion) in lost revenues and employees have lost nearly 8 billion Rand of earnings.

AMCU’s leaders maintain that most of their striking members are not happy with the latest offer of up to 10 percent.

Google has rolled out a new service in Ghana, Nigeria and Kenya that lets Gmail users send and receive emails using the built-in SMS features of their mobile phones.

The implications of this are pretty big, as it means mobile Internet access isn’t required, and users don’t need a new-fangled smartphone with 3G or WiFi capabilities either. For emerging markets, where iPhone and Android uptake may not be what it is in the Western world, not to mention limited Web access, Gmail SMS (available locally) is an interesting launch.

As long as you have a basic mobile phone with voice and SMS capability in these three African countries, you’ll now be able to do all your emailing by text message through activating a simple setting on your Gmail account.

“Gmail SMS automatically forwards your emails as SMS text messages to your phone and you can respond by replying directly to the SMS,” says Geva Rechav, Product Manager of Emerging Markets at Google. “You can control the emails received by replying with commands such as MORE, PAUSE and RESUME. Additionally, compose a new email as an SMS and send to any email address recipient – who will find your message in the right email conversation thread.”

So, how do you set yourself up with Gmail SMS?

First of all, you’ll need to log-in to your Gmail account, and click on your profile at the top of the page and then hit Account.

Next, you’ll have to access your settings in the “Phone and SMS” section:

You will then have to link your mobile phone number to your account to be able to send and receive emails from your handset:

When you click to send a verification code to your mobile phone, you then enter that number you receive into the box on the set-up page.

While the Gmail SMS service itself is free, you will of course still be charged whatever your local SMS rates are.

It’s not yet clear if it plans to open up this service to the rest of the world, but it seems that it likely will make this available in other key emerging markets across Africa and Asia, with Ghana, Nigeria and Kenya the test-beds for this initial launch.

We’ve contacted Google for further comment here, and to establish what its longer term plans are for Gmail SMS.